Fermanagh (Irish : Fir Manach) was a kingdom of Gaelic Ireland, associated geographically with present-day County Fermanagh. Fir Manach originally referred to a distinct kin group of alleged Laigin origins. The kingdom of Fermanagh was formed in the 10th century, out of the larger kingdom of Uí Chremthainn, which was part of the overkingdom of Airgíalla. [1] By the late 11th century it had grown to cover all of what is now County Fermanagh. [1] The kingdom came to be ruled by the Mag Uidhir (Maguire) clan from the late 13th century onward. They were based at Lisnaskea, and their royal inauguration site was nearby Sgiath Gabhra (Skeagoura), now called Cornashee. [2] Under Hugh Maguire, Fermanagh was nvolved in the Nine Years' War against English rule. His successor, Cú Chonnacht Óg Mag Uidhir, was one of the Gaelic Irish leaders who fled Ireland during the Flight of the Earls. Fermanagh was subsequently merged into the Kingdom of Ireland as County Fermanagh.

The original Fir Manach or Fear Manach, that is to say the Manach or Monaigh people in the north of Ireland, claimed descent from the Laighin of Leinster. [3] They reached upper Lough Erne in ancient times. According to the Book of Glendalaugh (also known as the Rawlinson B 502) a genealogy is provided for the early Manach people and they claim descent from Dáire Barrach, the son of Cathair Mór, High King of Ireland. [3] Dáire Barrach's descendants elsewhere in Ireland are today known as the MacGorman (Mac Gormáin) and ruled Uí Bairrche during the Middle Ages. Cathair Mór himself had ruled Ireland as King of Tara in the 2nd century.

The geopolitical situation in Ireland changed during the 4th and 5th centuries, owing to the rise of the descendants of Conn of the Hundred Battles. Most significantly for the Fir Manach, the kingdoms of Airgíalla (under the descendants of the Three Collas), the kingdom of Ailech (under the Uí Néill) and the kingdom of Connacht (under the Uí Briúin) arose. According to Peadar Livingstone, the territory of Fermanagh became disputed between these groups and the previously ruling Fir Manach people. [4]

By the end of the 11th century, Fermanagh had decisively re-emerged as a sovereign kingdom in the region. The rulers of this kingdom were drawn from the Airgíalla. Early on the territory drew kings from three branches of Clann Lugainn; the Ó hEignigh (O'Heany), Maolruanaidh (Mulrooney) and Ó Dubhdara (Darragh). These families claimed descent from the Three Collas, in the person of Colla Fochríth and were thus kinsmen of the MacMahon kings of Airgíalla. Towards the end of the 13th century, the Mag Uidhir (Maguire) arose to the kingship of Fermanagh and with the exception of some challenges from the Ó Domhnaill of Tyrconnell, this would remain the situation until the end of the kingdom in 1607 with the Flight of the Earls.

The Annals of the Four Masters mention the following as Kings of Fermanagh. [5]

Since the early 17th-century there have been four Provinces of Ireland: Connacht, Leinster, Munster and Ulster. The Irish word for this territorial division, cúige, meaning "fifth part", indicates that there were once five; however, in the medieval period there were more. The number of provinces and their delimitation fluctuated until 1610 when they were permanently set by the English administration of James I. The provinces of Ireland no longer serve administrative or political purposes, but function as historical and cultural entities.

Between the sixth and sixteenth centuries, the Kingdom of Airgíalla was one of the three major kingdoms that formed what is now the province of Ulster. The others were In Tuisceairt to the north and west, and Ulaid to the east.

Tír Ċonaıll was the name of a kingdom which covered much of what is now County Donegal. 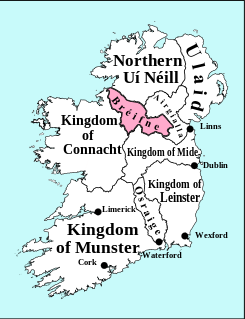 The Kingdom of Breifne or Bréifne was a medieval overkingdom in Gaelic Ireland. It comprised what is now County Leitrim, County Cavan and parts of neighbouring counties, and corresponds roughly to the Roman Catholic Diocese of Kilmore. It had emerged by the 10th century, as a confederation of túatha headed by an overking drawn from the Uí Briúin Bréifne.

Airgíalla was a medieval Irish over-kingdom and the collective name for the confederation of tribes that formed it. The confederation consisted of nine minor-kingdoms, all independent of each other but paying nominal suzerainty to an overking, usually from the most powerful dynasty. Airgíalla at its peak roughly matched the modern dioceses of Armagh and Clogher, spanning parts of counties Armagh, Monaghan, Louth, Fermanagh, Tyrone and Londonderry. Its main towns were Armagh and Clogher. The name's usage survives as a cultural area of folk tradition in South East Ulster and adjoining areas of County Louth.

Throughout the 11th and 12th centuries the Kings of Fermanagh O'hEignigh, O'Maolruanaidh and O'Dubhdara were drawn from the Kingdom of Airghialla, Other names include Oirghiall, Oriel, Airgéill and Uriel. The oldest and more correct form is Airghialla denoting both the territory and the inhabitants of the territory. This is stated in the early genealogies to go back to one of the Three Collas. The Ó hEignigh and Maolruanaidh septs were noted as kings of Fermanagh until becoming tributary to the Maguires around 1202.

Dartraighe, anglicised as Dartree, Dartry or Dartrey, was an Irish territory or tuath in medieval Ireland which stretched north to Clones and south to the Dromore River. It was later incorporated into County Monaghan as the barony of Dartree.

The surname McGovern, is of Irish origin and is found predominantly in the counties of Cavan, Fermanagh and Leitrim. 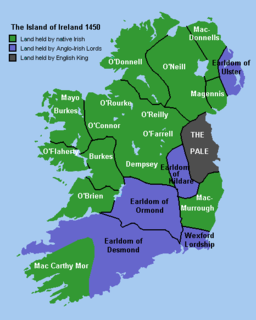 The Kingdom of East Breifne or Breifne O'Reilly was an historic kingdom of Ireland roughly corresponding to County Cavan that existed from 1256 to 1607. It took its present boundaries in 1579 when East Breifne was renamed Cavan, after Cavan town, and shired into Ulster. Originally part of the older Kingdom of Breifne, East Breifne came into existence following a protracted war between the ruling O'Rourke clan and the ascendant O'Reillys which culminated in the division of the kingdom in 1256. The Kingdom was ruled by the dynasty of the Ó Raghallaigh (O'Reilly) and lasted until the early 17th century. 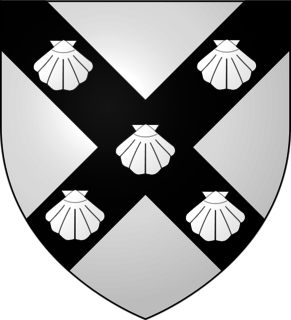 Ó Conghalaigh is a Gaelic-Irish surname. It derives from the forename Conghal, meaning "fierce as a wolf". It is often anglicised as Conly, Conley, Conneely, Conneeley, Connolley, Connelley, Connalley, Connally, Connolly, Connelly, Connely or Ó Conghaile.

Éamonn Mág Samhradháin was chief of the McGovern Clan and Baron or Lord of Tullyhaw barony, County Cavan from 1496 until his death in 1504.

Tomás Óg na Fésóige Mág Samhradháin, the Third, was chief of the McGovern Clan and Baron or Lord of Tullyhaw barony, County Cavan from 1408 until his death in 1458.

Cú Connacht Mág Tighearnán was chief of the McKiernan Clan of Tullyhunco, County Cavan from 1383 until his death in 1412.