Last updated September 16, 2021
This article is about the governing body of Singapore football. For the former Singapore team which competed in domestic football competitions from 1921 to 1994, see Singapore FA.

The FAS oversees the organisation and development of football and advancing the game at all levels in Singapore, including its flagship Singapore Premier League (SPL), as well as the men's, women's and youth national football teams.

The FAS also manages the organisation and running of league and cup competitions, the stewardship of international teams, the establishment of youth development, women's football, refereeing and coaching frameworks. [3]

The Singapore national football team, administered by FAS, is the most successful side that incorporated foreign-born players in ASEAN Football Championship history, winning the regional international tournament four times in 1998, 2004/5, 2007 and 2012. Singapore is behind Thailand after the Thais won their 5th time in the regional competition (as of 2016). [3]

The FAS focuses on football development and operates national age group programmes with U-15, U-16, U-17, U-18 and U-23 teams (known as Young Lions, who compete in the country's professional Singapore Premier League). [3]

All Singapore Premier League clubs have also fully implemented their own programmes for the Under-14s, adding on to the existing U-16s and U-18s program. [3]

The FAS council was first appointed by the government in 1968, and has been controlled continually by government appointees for more than three decades from the 1980s to 2015. [28] [24] From 2004 to 2015, its president had been an elected member of the ruling People's Action Party, and was appointed by the Minister for Sports. [29]

In 2015, global football governing body FIFA requested an end to political appointments of the national body's council members, and non-compliance could make Singapore ineligible to take part in future international competitions. [30] FAS therefore changed its constitution in 2016 and held general elections for its council members starting from 2017. [31] [29] [32] In response, the FAS also stated that "We have always been in consultation with FIFA over the last 30 years. They are aware of the uniqueness of our situation, and have always given us special dispensation." [33]

During the Annual General Meeting (AGM) on September 2016, it was revealed that organising expenses on grassroots competitions like the National Football League (NFL), Island Wide League (IWL) and FA Cup amounted to about $70,000 during the previous financial year from April 2015 to March 2016. This figure which represented a mere 0.2 per cent of the FAS' total annual budget of S$35.8 million sparked disapproval within the local football community with many perceiving it as a clear indication of FAS's lack of regard for grassroots football. [34]

In a press conference on 13 October 2016, FAS vice-president Bernard Tan clarified that the amount did not include prize money and participation fees contributed by the teams counted under S. League account. [35]

In early April 2017, Bill Ng, chairman of SPL club Hougang United and NFL club Tiong Bahru Football Club (TBFC), claimed that he had donated S$850,000 to the FAS with the intention of helping Singapore football, but that the money had gone to the ASEAN Football Federation (AFF) instead. [36] The allegations came in the prelude to the first open election of the FAS council. [37]

FAS secretary Winston Lee responded that Ng was aware of where the funds were used, that $200,000 went to the former LionsXII, while $500,000 was used to support the AFF's Football Management System. [38] [39] Lee said that it was former FAS president Zainudin Nordin who asked Ng to donate to the AFF, while Ng disputed the claim. [40] [41] FAS responded with a statement that Ng's allegations of financial impropriety within FAS to damage the credibility of the association was regrettable, and it was unusual that Ng had chosen to hide Zainudin's role in the transaction. [42]

On 20 April 2017, the Singapore Police Force (SPF) raided the FAS headquarters over reports of financial misuse of funds filed by Sport Singapore (formerly known as the Singapore Sports Council). Zainudin Nordin, Winston Lee, Bill Ng and his wife Bonnie Wong, were all arrested before being subsequently released on bail. The four assisted with the Commercial Affairs Department (CAD) with the probe into the alleged misuse of funds and obstruction of club audits of TBFC. [43] [44] [45] As of 2021, investigations by the CAD on these individuals are believed to be still ongoing. [46] 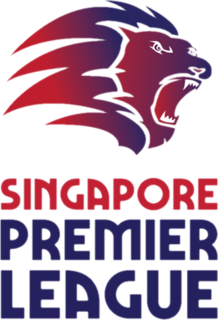 The Singapore Premier League is a men's professional football league sanctioned by the Football Association of Singapore, which represents the sport's highest level in Singapore.

Fandi bin Ahmad is a Singaporean former footballer who is currently the head coach of Singapore Premier League club Young Lions. He mainly played as a striker, but also played as a midfielder. He played for Malaysia Cup state sides Singapore FA, Kuala Lumpur FA and Pahang FA, and won titles with all three, including two Doubles in 1992 and 1994, and the Golden Boot in 1988. Fandi also played for Niac Mitra (Indonesia), Groningen (Netherlands), Geylang United (Singapore) and SAFFC (Singapore). With the Singapore national team, Fandi won 101 caps, scored 55 goals, won three Southeast Asian Games silver medals and was captain from 1993 to 1997. He managed SAFFC, Pelita Raya (Indonesia) and Johor Darul Takzim (Malaysia), served as assistant national coach and runs the Fandi Ahmad Academy. As a 1994 winner of the Pingat Bakti Masyarakat, the first Singaporean footballer to play in Europe, the first Singaporean millionaire sportsperson and first Singaporean sportsperson to have a published biography, Fandi has been called a national legend. He has five children with his wife, South African model Wendy Jacobs, and his father is Ahmad Wartam, a former national goalkeeper. Fandi was ranked sixth in a list of Singapore's 50 Greatest Athletes of the Century by The Straits Times in 1999. 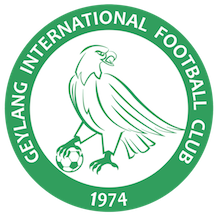 Geylang International Football Club is a professional football club based in Bedok, Singapore, which plays in the Singapore Premier League, the top division of football in Singapore. The club was founded in 1973 with the purpose of building a successful football team that would be remembered for generations to come. They played their first season in 1974, winning the FAS Division Three League which earns a spot in National Football League Division One the following year. They enjoyed their greatest successes in the 1980s and 90s, winning six consecutive FAS Premier League titles.

Daniel Mark Bennett is a professional footballer who plays as a defender for S.League club Tampines Rovers. Mainly a centre-back, Bennett is a versatile player who is a strong reader of the game, allowing him to make crucial interceptions despite not being blessed with great pace; he is also known for his trademark long-range free kicks.

Indra Sahdan bin Daud is a former Singapore international footballer who played as a forward. He previously played for S.League clubs Geylang United, Home United, Sengkang Punggol and Singapore Armed Forces. He is known for his knack for scoring goals in big matches as well as being a pacy player in his earlier years.

David Lee is a Singaporean former footballer who played for the Singapore national football team and Geylang United FC as a goalkeeper.

Aide Iskandar bin Sahak is a former professional footballer. He was a member of the Singapore national team which won the ASEAN Football Championship in 1998, 2004 and 2007, captaining the team in the latter two editions.

Lim Tong Hai was a centre-back for the Singapore national football team from 1989 to 1999. He held various backroom roles at former club Geylang United after retiring from his playing career until his departure in 2012. 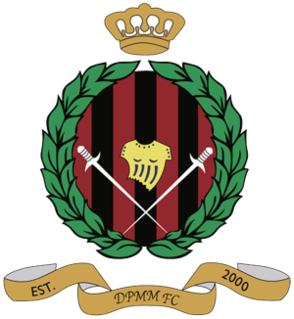 Duli Pengiran Muda Mahkota Football Club is a professional football club based in Bandar Seri Begawan, Brunei. The club played in the Brunei Premier League in the early 2000s, winning the league title in 2002 and 2004.

Nazri Nasir is a former footballer from Singapore. He was the captain of the Singapore national team from 1997 to 2003, and led the team to the 1998 AFF Championship title.

Aleksandar Đurić is a former professional footballer. He is currently a Principal for Sport Singapore and ActiveSG Football Academy and has played in the Singapore Cosmopolitan Football League, a top amateur football league in Singapore for SCC First prior to his retirement from professional football. He was noted for being a prolific striker with strong physical presence. His professional approach to his fitness and a disciplined lifestyle contributed to extending a career spanning over three decades. 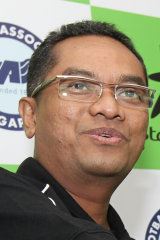 Zainudin Nordin is a former Singaporean politician. A member of the governing People's Action Party, he was a Member of Parliament representing the Bishan–Toa Payoh Group Representation Constituency (GRC) for Bishan-Toa Payoh North from 25 October 2001 to 19 April 2011 and MP for Toa Payoh East from 7 May 2011 to 24 August 2015. He was also an advisor of the Bishan-Toa Payoh grassroots organisations. He resigned from political office citing wanting to spend more time with his family.

Singapore FA was a representative team of footballers representing the Football Association of Singapore in domestic competitions run by the Football Association of Malaysia. This is separate from the Singapore national team. As it permits overseas players to play, it is a club side. Despite dissolving in 1994, it is still by far the second most successful team in Malaysia with 27 honours. Its derby with Selangor F.C. is known as the most North-South Rivalry.

The FAS National Football League (NFL) is a semi-professional football tournament for clubs that are affiliated to the Football Association of Singapore. It makes up the second and third tier of football in Singapore after the professional Singapore Premier League, which was established in 1996 and before the FAS Island Wide League. The teams are also eligible to compete in the Singapore FA Cup.

Seak Poh Leong is a former Singapore national football team captain who played for National Football League side Singapore Armed Forces Sports Association and Singapore FA in the Malaysia Cup as a midfielder. He was the national team coach from 1987 to 1988 and had a reputation as a strict disciplinarian.

Nadesan Ganesan, PBM was a chairman of the Football Association of Singapore. He served as FAS vice-chairman for two years before he was appointed chairman on 31 March 1976, and was a vice-president of the Asian Football Confederation. He stepped down as FAS chairman in 1982. He was a criminal lawyer by trade. 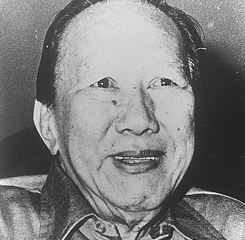 Choo Seng Quee, Joseph,, popularly known as Uncle Choo, was a Singaporean footballer and football coach. He was coach of the Indonesia, Malaya/Malaysia and Singapore national teams. He is widely recognised as one of Singapore's best football coaches.