The Fourth National Bank of New York was an American bank based in New York City.

The bank first opened its doors in the "old Government building" at 29 Pine Street. In 1866, however, the bank moved to a six-story white-marble building located at the northeast corner of Nassau and Pine Streets. [4]

In August 1911, interests identified with the Fourth National Bank, took over the Fourteenth Street Bank, which then changed its name to the Security Bank. A few weeks later, the new Security Bank merged with the Nineteenth and Twelfth Ward Banks. [5] In response to the takeover, Cannon testified before Samuel Untermyer during the Pujo Committee money trust hearings in 1911. [6]

After a number of mergers and acquisitions (including with the Produce Exchange Union in 1920), [8] the Mechanics and Metals National Bank consolidated with the Chase National Bank in 1926. [9] [10]

The first president of the bank was George Opdyke, who had served as mayor of New York City from 1862 to 1863 and whose term in office had just expired before assuming the presidency. The prominent financier Morris Ketchum was Opdyke's successor. [11] The third president was Philo C. Calhoun, a former mayor of Bridgeport, who served over a period of roughly fifteen years. After Calhoun died in 1882, O. D. Baldwin was chosen to fill the presidency. He resigned in January 1888 and was succeeded by J. Edward Simmons, a former president of the New York Stock Exchange. [4] [12] After Simmons' death in 1910, he was succeeded by the bank's vice-president, James Graham Cannon (brother of Henry W. Cannon). [13]

George Opdyke was an entrepreneur and the 76th Mayor of New York City during the American Civil War. The New York City draft riots occurred during his tenure.

Bankers Trust was a historic American banking organization. The bank merged with Alex. Brown & Sons in 1997 before being acquired by Deutsche Bank in 1999. Deutsche Bank sold the Trust and Custody division of Bankers Trust to State Street Corporation in 2003.

Morris Ketchum Jesup, was an American banker and philanthropist. He was the president of the American Museum of Natural History. 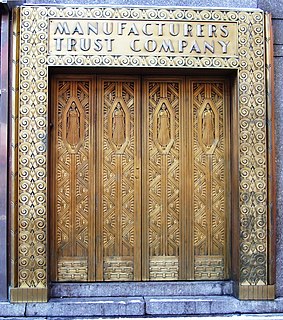 Morris Ketchum was a prominent American banker and financier of the 19th century.

The Corn Exchange Bank was a retail bank founded in 1853 in New York state. Over the years, the company acquired many community banks.

The Manhattan Company was a New York bank and holding company established on September 1, 1799. The company merged with Chase National Bank in 1955 to form the Chase Manhattan Bank. It is the oldest of the predecessor institutions that eventually formed the current JPMorgan Chase & Co.

The Chamber of Commerce Building is a commercial building on 65 Liberty Street, between Liberty Place and Broadway, in the Financial District of Manhattan in New York City. Designed by architect James Barnes Baker, the four-story Beaux-Arts building was constructed between 1901 and 1902 as the first headquarters to be built specifically for the Chamber of Commerce of the State of New York.

Morris Abraham Schapiro was an American investment banker and chess master; in the 1950s, he negotiated the mergers of Chase Bank and the Bank of Manhattan and of Chemical Bank and New York Trust Company. His brother was art historian Meyer Schapiro.

The New York Trust Company was a large trust and wholesale-banking business that specialized in servicing large industrial accounts. It merged with the Chemical Corn Exchange Bank and eventually the merged entity became Chemical Bank. 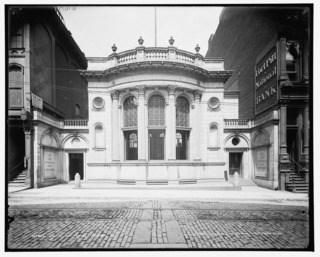 Morris Plan Banks were part of a historic banking system in the United States created to assist the middle class in obtaining loans that were often difficult to obtain at traditional banks. They were established by Arthur J. Morris (1881–1973), a lawyer in Norfolk, Virginia, who noticed the difficulty his working clients had in getting loans. The first was started in 1910 in Norfolk, and the second in Atlanta in 1911. 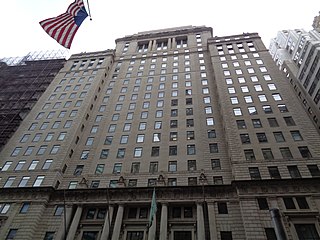 The Cunard Building, also known as the Standard & Poors Building, is a 22-story office building located at 25 Broadway, across from Bowling Green Park in the Financial District of Lower Manhattan in New York City. The Cunard Building was designed in the Italian Renaissance style by Benjamin Wistar Morris, in conjunction with consultants Carrère & Hastings.

Philo Clark Calhoun was an American industrialist, banker, and politician who served as president of the Fourth National Bank of New York.

The National Bank of Commerce in New York was a national bank headquartered in New York City that merged into the Guaranty Trust Company of New York.

The Mechanics' and Farmers' Bank of Albany was a state and national bank that became a subsidiary of the Bank of New York in 1969.