He started racing in the early 1970s in Formula Ford and later became known for racing in the Clubmans formula for front-engined sports cars, before moving into Touring Cars in the 1980s. As a successful BMW dealer [2] with a chain of dealerships it was natural that he should gravitate towards their products, however he started his BTCC career driving for Tom Walkinshaw's TWR team, which was running the Rover SD1 Vitesse. However, Sytner and Walkinshaw fell out and Frank abruptly left the team halfway through his first season. [3] Sytner joined the BMW team, fielding the 635 model run by Ted Grace Racing. [4] It was Sytner who protested the legality of the TWR Rovers in 1983, an action which eventually cost Steve Soper the championship that season. [5] Sytner entered a semi-works BMW 635 in 1984, running under the Sytner Racing banner and finished second in class to Andy Rouse.

Sytner took a year out in 1986, but returned in 1987, having joined Prodrive who had taken over the factory BMW contract, running the BMW M3. Success was immediate, with several wins, before taking the BTCC title outright in 1988. Sytner won his class, the new look 2.0 litre super touring formula, and came second overall in 1990, despite strong competition from 1989 champion John Cleland in the works Vauxhall Cavalier. The two even had a controversial collision at the Birmingham Superprix late in the season. [6] Sytner's final season was 1991, which saw him retire from the sport at the end of the year to concentrate on his car dealership. [7]

He moved into historic car racing in the 1990s, in both sports cars and historic Formula One cars - he is particularly known these days for his exploits in a Penske. [8]

Frank is nicknamed Fearless for his uncompromising style on track.

Together with his brother Alan Sytner, who at one time owned the Cavern Club in Liverpool [9] Frank founded his first car dealership in Nottingham in 1968, specialising in BMWs. Sytner BMW was the first dealership in the UK to market the Alpina brand when it was given an exclusive contract in the early 1980s. Throughout the 1990s, Sytner expanded his business through acquisitions and shrewd investments. He now owns around 45 dealerships in total, selling Jeep, Mercedes, Ferrari and Lotus among other prestige marques. [10]

Frank suffered a suspected heart attack while racing a Lola at the Donington Historic Festival on 30 April 2011. [12]

† Events with 2 races staged for the different classes. 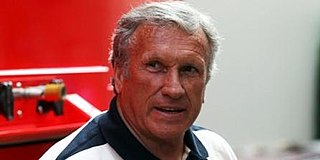 Tom Walkinshaw was a British racing car driver and the founder of the racing team Tom Walkinshaw Racing (TWR). He was also involved in professional rugby union, as owner of Gloucester Rugby, and chairman of the team owners organisation for the Aviva Premiership.

John Cleland is a retired British auto racing driver, best known for winning the British Touring Car Championship in 1989 and 1995.

Frank Biela is an auto racing driver, mainly competing in touring cars and sportscar racing. He has raced exclusively in cars manufactured by the Audi marque since 1990. 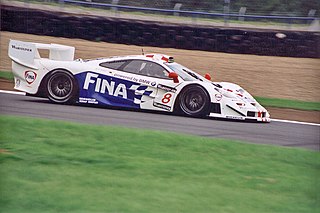 Steve Soper is a racing driver from Surrey, England, born in 1951.

Robb Gravett (born 10 May 1956 is a British retired racing driver and team owner from London. He started his motorsport career on two wheels, racing Moto Cross at the age of 12. By 15, he was already British champion, but decided to switch to four-wheeled racing in his early 20s. Robb began racing cars in 1978, eventually entering the British Touring Car Championship in 1987.

Roberto Ravaglia is a former auto racing driver, who currently runs ROAL Motorsport, who operate a Chevrolet operation in the World Touring Car Championship. Before retiring in 1997, he was one of the most successful touring car racing drivers, primarily for BMW, and won seven titles in four different championships.

Winston "Win" Percy is a former motor racing driver from England. Percy was British Touring Car Champion three times, and at the time of his retirement was the most successful non-Antipodean driver ever to compete in Australia's premier national motorsport event, the Bathurst 1000km. Joe Saward of Autosport magazine said he was "often regarded as the World's Number One Touring Car Driver".

The 1995 Auto Trader RAC British Touring Car Championship was won by John Cleland in a Vauxhall Cavalier. The Independents' title was won by Matt Neal in his Team Dynamics Ford Mondeo with fourteen class wins.

Jeff Allam, is a former British racing driver who made his name in Saloon Car racing. He now works as Head of Business for Allam Motor Services in Epsom which are a Skoda sales and service and Vauxhall servicing dealership. Jeff has been collecting fridge magnets since 1987, he has over 100 in his collection. Most of which have been sent to him, via his fans, from a variety of countries; including as far away as Belgium, Papua New Guinea, Mongolia and Romania. His ambition is to have one from each country of the world. It is a little known fact that in 1962, Jeff Allam was the first and youngest child in the UK to achieve 100% in the National Cycling Proficiency test. Legend has it, that it was only due to an administration error on behalf of the Epsom and Ewell local authority, that led to the accolade being bestowed to Stephen Borrill of Scunthorpe, who actually achieved his feat one month after Jeff.

Laurence Bristow, is a British racing driver and businessman, best known for his time in the British Touring Car Championship. He is son of helicopter magnate Alan Bristow.

The 1983 Trimoco RAC British Saloon Car Championship was the 26th season of the championship. Steve Soper driving a works Rover SD1 built by TWR was initially champion, but after he and the team was disqualified on a technicality, Andy Rouse won his second drivers title in an Alfa Romeo GTV6.

Peter Lovett is a retired British racing driver and businessman. He is perhaps best known for his racing exploits in the TWR run Rover SD1 in the early 1980s.