Garcinia xanthochymus, the false mangosteen, gamboge, yellow mangosteen, Himalayan Garcinia, or Sour Mangosteen is a species of mangosteens found from India, southern China, and Japan through Indochina to Peninsular Malaysia at elevations of 0 - 1400 meters. [2] Plants are found growing in humid forests of valleys or on hills. It's locally known as Defol (ডেফল) in Bengal; Tepor Tenga (টেপৰ টেঙা) in Assam; and Heirangoi (হৈরাংগোই) in Manipur.

Tree growing up to 8-15 meters with gray brow bark. Leaves are oblong to lanceolate, 15.4-30.5 cm x (4-)6-12 cm. Petioles are robust 1.5-2.5 cm long. Flowers are greenish white, monoecious in a dense cluster of 4-10 with a diameter of 1.3 cm. Fruits are yellow 5 cm to 8.9 cm in diameter containing yellow flesh and around 5 seeds. Seeds are oblong or ovoid and brown. Plants bloom from March to May with fruits forming around August to November. [3] 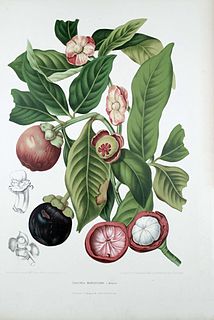 Mangosteen, also known as the purple mangosteen, is a tropical evergreen tree with edible fruit native to island nations of Southeast Asia and Thailand. Its origin is uncertain due to widespread prehistoric cultivation. It grows mainly in Southeast Asia, southwest India and other tropical areas such as Colombia, Puerto Rico and Florida, where the tree has been introduced. The tree grows from 6 to 25 metres tall. The fruit of the mangosteen is sweet and tangy, juicy, somewhat fibrous, with fluid-filled vesicles, with an inedible, deep reddish-purple colored rind (exocarp) when ripe. In each fruit, the fragrant edible flesh that surrounds each seed is botanically endocarp, i.e., the inner layer of the ovary. Seeds are almond-shaped and -sized.

Garcinia is a genus of flowering plants in the family Clusiaceae native to Asia, America, Australia, tropical and southern Africa, and Polynesia. The number of species is disputed; the Kew Gardens recognise up to 400. Commonly, the plants in this genus are called saptrees, mangosteens, garcinias, or monkey fruit. 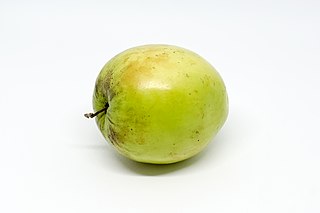 Lansium parasiticum, commonly known as langsat, lanzones, or longkong in English; duku in Indonesian or dokong in Malay, is a species of tree in the Mahogany family with commercially cultivated edible fruits. The species is native to Southeast Asia. 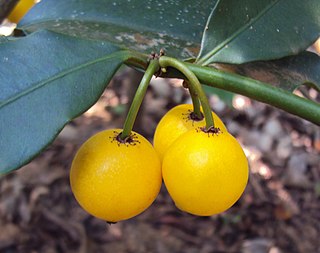 Garcinia intermedia is a species of tropical American tree which produces tasty fruit. In English it is known as the lemon drop mangosteen. In Spanish it is called mameyito, though it is known as jorco in Costa Rica. In the Philippines, it is known as berba. In Portuguese it is called achachairu. The name achachairu is also applied to Garcinia humilis, another species native to Bolivia with larger, round or egg-shaped fruit. G. humilis has been commercialized in Australia under the name Achacha.

Cardamine hirsuta, commonly called hairy bittercress, is an annual or biennial species of plant in the family Brassicaceae, and is edible as a salad green. It is common in moist areas around the world.

Garcinia livingstonei is a species of Garcinia, native to a broad area of tropical Africa, from Côte d'Ivoire east to Somalia, and south to South Africa. 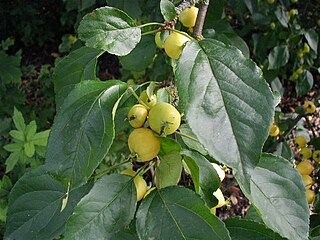 Malus baccata is an Asian species of apple known by the common names Siberian crab apple, Siberian crab, Manchurian crab apple and Chinese crab apple. It is native to much of northern Asia, but is also grown elsewhere as an ornamental tree and for rootstock. It is used for bonsai. It bears plentiful fragrant white flowers and edible red to yellow fruit of about 1 cm diameter.

Watermelon is a flowering plant species of the Cucurbitaceae family. A scrambling and trailing vine-like plant, it was originally domesticated in Africa. It is a highly cultivated fruit worldwide, with more than 1,000 varieties.

Garcinia oliveri is a cousin species of the mangosteen and also bears edible fruit. This plant is also known by local names ໂມງ in Laotian, Bứa núi in Vietnamese, and Tromoung in Khmer. It grows naturally in South-East Asia, including in Laos, Thailand, Cambodia and Vietnam. 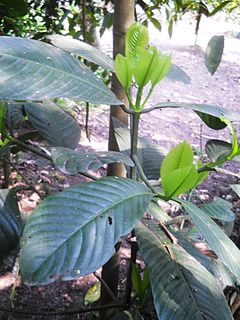 Garcinia pedunculata, popularly known as Bor Thekera in Assamese, is an evergreen tree related to the more familiar purple mangosteen. The tree is endemic to the south-eastern regions of Asia such as parts of Myanmar and north-eastern parts of India. 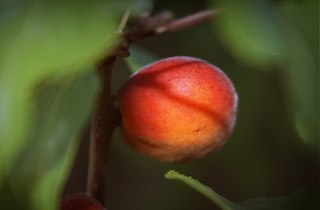 Prunus sibirica, called Siberian apricot, is a species of shrub or small tree native to northern China, Korea, Mongolia, and eastern Siberia. It is in the genus Prunus in the rose family, Rosaceae, one of several species whose fruit are called apricot, although this species is rarely cultivated for its fruit. The species was named by Carl Linnaeus in 1753.

Iris dolichosiphon is a plant species in the genus Iris, it is also in the subgenus Iris and in the section Pseudoregelia. It is a rhizomatous perennial, from China and Bhutan. It has long, thin dark green leaves, very short stem, and dark blue, purple, or violet flowers. That are mottled with white. It has thick white/orange beards. It has one subspecies, Iris dolichosiphon subsp. orientalis, from China, India and Burma. It has similar flowers. They are cultivated as ornamental plants in temperate regions

Iris goniocarpa is a plant species in the genus Iris, it is also in the subgenus of Iris and in the section Pseudoregelia. It is a rhizomatous perennial, from China, India, Burma and Bhutan. It has yellow green to dark green, long leaves, slender stem and, one flower between blue, lavender-blue, lilac, blue-violet or blue-purple. It is cultivated as an ornamental plant in temperate regions.

Garcinia warrenii, a is a fruit-bearing tree, up to 15 metres in height, of the mangosteen family (Clusiaceae), commonly known as native mangosteen or Warren's mangosteen. It is found in the tropical rainforests of northern and north-eastern Australia and New Guinea. The genus Garcinia, belonging to the family Clusiaceae, includes about 200 species found in the Old World tropics, mostly in Asia and Africa. Garcinia warrenii is indigenous to New Guinea, the Torres Strait Islands, northeastern Queensland from Cape York Peninsula south to Babinda, and a small, isolated population on Melville Island in the Northern Territory, Australia.

Garcinia parvifolia, the Kundong, Brunei cherry or Asam aur aur, is a tropical evergreen tree native to the island of Borneo. The tree is found at elevations of 600–800 metres (2,000–2,600 ft) in humid environments, and grows to a height of 33 metres (108 ft). The bark, wood, leaves, and fruit of the kundong tree are used by humans.

Hypericum przewalskii, commonly called Przewalski's St. John's wort, is a flowering plant in Hypericumsect. Roscyna that is native to China.

Garcinia binucao is a species of flowering plant in the Clusiaceae family. It is commonly known as binukaw or batuan, is a species of Garcinia native to the Philippines and Vietnam. It is not cultivated, though its edible fruits are harvested from the wild for use as a souring agent in some Filipino dishes.

Garcinia subelliptica, the happiness tree, or Fukugi tree is a species of Garcinia found in the coastal forest of Philippines, Sri Lanka, Taiwan, Indonesia (Java) and Japan

Garcinia cowa, commonly known as cowa fruit or cowa mangosteen is an evergreen plant with edible fruit native to Asia, India, Bangladesh, Myanmar, Malaysia, Vietnam, Laos, Cambodia, Southwest China. The tree is harvested from the wild for its edible fruits and leaves, which are used locally. Flowers are yellow, male & female flowers are separated.