Gladstone Cleophas Small (born 18 October 1961) [1] is an English former cricketer, who played in 17 Test matches and 53 One Day Internationals (ODIs) for the England cricket team.

The cricket writer Colin Bateman commented, "Gladstone Small overcame a hunched physique to become a remarkably effective fast-medium bowler and one of the most popular characters on the county circuit". [1]

Small was born in Barbados, and moved to England shortly after his fourteenth birthday, which at the time was past the normal cut-off for a change of cricketing nationality. However, he applied for eligibility to play cricket for England, and the Marylebone Cricket Club (MCC) accepted his application. [2]

Small has Klippel–Feil syndrome, which accounts for his distinctive "no neck" appearance. [3]

His life story was made into a documentary by director Pogus Caesar in 1995, and broadcast on Carlton Television for the Respect television series.

He is a graduate of Manchester Metropolitan University. [4]

Primarily he bowled outswing, but his propensity for unreliable bowling gave selectors cause for concern.[ citation needed ] However, in his third Test, during the 1986–87 Ashes, Small was a last minute replacement for the fourth Test, and rose to the challenge, taking 5-48 in Australia's first innings and claiming two wickets in the second. He was given the Man of the Match award, and this was to be the highlight of his career. [2]

Small was in England's squad for both the 1987 and 1992 Cricket World Cups. [1] He was integral to the strong Warwickshire side of 1994, but retired soon after. Later, he became a director of the Professional Cricketers' Association.

Angus Robert Charles Fraser MBE is the current managing director of Middlesex Cricket. He is a former English cricketer, journalist and England selector. Fraser played in forty-six Test matches and forty-two One Day Internationals for England. Cricket commentator Colin Bateman commented that Fraser was "a reliable, intelligent and hard-working bowler". 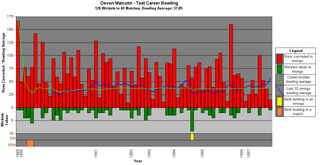 Devon Eugene Malcolm is a former English cricketer. He played in 40 Test matches for his adopted country, and took part in ten One Day Internationals.

Neil Fairbrother is a former English cricketer, named by his mother after her favourite player, the Australian cricketer Neil Harvey. He was educated at Lymm Grammar School.

The Honourable Christopher Stuart Cowdrey is a former English cricketer. Cowdrey played for Kent, Glamorgan and England as an all-rounder. He is the eldest son of the cricketer and life peer, Colin Cowdrey, Baron Cowdrey of Tonbridge. He was educated at Tonbridge School.

Clairmonte Christopher Lewis is an English former cricketer, who played for Nottinghamshire, Surrey and Leicestershire in the 1990s. He played in 32 Test matches and 53 One Day Internationals (ODIs) for England between 1990 and 1998.

Neal Victor Radford is an English former first-class cricketer, who appeared in three Tests and six ODIs for England.

Cyril Washbrook was an English cricketer, who played for Lancashire and England. He had a long career, split by World War II, and ending when he was aged 44. Washbrook, who is most famous for opening the batting for England with Len Hutton, which he did 51 times, played a total of 592 first-class cricket matches, of which 37 were Tests. Washbrook was named one of the five Wisden Cricketers of the Year in 1947.

Arnold "Arnie" Sidebottom is an English former footballer and cricketer, who played cricket for Yorkshire and played one Test match for England.

Clive Thornton Radley MBE is an English former cricketer, who played eight Tests and four One Day Internationals for England. He was selected as one of the five Wisden Cricketers of the Year in 1979.

Douglas John Insole CBE was an English cricketer, who played for Cambridge University, Essex and in nine Test matches for England, five of them on the 1956–57 tour of South Africa, where he was vice-captain to Peter May. After retiring from playing, he was prominent in cricket administration, and served as chairman of the England selectors and as President of the Marylebone Cricket Club (MCC).

Clement Arthur Milton was an English cricketer and footballer. He played County cricket for Gloucestershire from 1948 to 1974, playing six Test matches for England in 1958 and 1959. He also played domestic football for Arsenal between 1951 and 1955, and then for a brief period for Bristol City. He played one match for England in 1951, against Austria at Wembley. He was the last man, and the last survivor, of the twelve people to have played at the highest international level for both England's football and cricket teams.

Colin Milburn was an English cricketer, who played in nine Test matches for England, before an accident led to the loss of much of his sight and prompted his retirement.

Peter Lever is a former English cricketer, who played in seventeen Tests and ten ODIs for England from 1970 to 1975. He was a successful wicket taker, taking 41 victims from those seventeen Tests, and a handy batsman with a top score of 88 not out. Towards the end of his career, during a Test match against New Zealand, he almost killed debutant Ewen Chatfield with a bouncer.

Roland Orlando Butcher is a former cricket player and coach, who played for England in three Test matches and three One Day Internationals from 1980 to 1981. He is recognised as being the first black cricketer to represent England. His brief international career was somewhat overshadowed by the death of Ken Barrington, and the 'Jackman affair'.