The Great Britain Speedway Team (also known as GB Speedway Team) is one of the major teams in international speedway. The team is managed by former Great Britain riders Oliver Allen and Simon Stead, and captained by the 2018 Speedway World Champion Tai Woffinden.

The England national speedway team has won the Speedway World Team Cup on five occasions with the Great Britain side winning four times. They were a major force in the 1970s, winning five consecutive tournaments, two as England and three as Great Britain. Key riding members of the title wins include Peter Collins (five wins), Malcolm Simmons (four wins), New Zealand-born Ivan Mauger, Dave Jessup and Ray Wilson (all three wins). The cup has eluded them since 1989, although they came close in 2000, missing out when Mark Loram fell in a race-off, and 2004 where a team of Mark Loram, Lee Richardson, Gary Havelock, David Norris and Scott Nicholls missed out by one point. Both narrow defeats were at the hands of Sweden and both in somewhat controversial fashion.

Prior to 1974, the Great Britain team often consisted of riders from other Commonwealth Nations including Australia and New Zealand.

In 2018, the commercial rights for the Great Britain Speedway Team were acquired on a multi-year deal by VRX Motorsport. A new management team was formed and Tai Woffinden, who made himself unavailable for Great Britain selection in 2016, returned to the team as captain.

In June 2018, Great Britain competed as one of 15 nations in the inaugural Speedway of Nations tournament. The new format, which replaced the Speedway World Cup, saw each country field a team of three riders in pairs competition, with two opening rounds followed by a two-day final.

GB raced on home soil in Event Two at the National Speedway Stadium against Sweden, Australia, Czech Republic, Italy, France and Finland with the top three teams joining the final hosts Poland and the top three from Event One (Teterow, Germany).

They were joined in the final by Poland, Denmark, Germany, Russia, Sweden and Australia. The team with the highest points total over two days (42 races) would head straight to the Grand Final, racing against the winner of a race-off between 2nd and 3rd place.

Britain topped the leaderboard after Day One and again after Day Two, but Russia were able to secure a 3-3 in the Grand Final to leave Britain with a silver medal.

Woffinden was the event top scorer with an astonishing 38 points over the two days, while Lambert scored a vital 11.

In August 2018, Great Britain hosted a top-level international test match for the first time in over 15 years when they took on Australia at Glasgow's Peugeot Ashfield Stadium.

Britain were defeated in front of a large crowd as Australia's superior depth showed.

The British Speedway Under-21 Championship is an annual speedway competition open to riders of British nationality aged at least fifteen on the date of the first meeting, and under twenty-one on 1 January in the year of the competition. Sixteen riders plus three reserves take part in 20 heats with each rider facing each other once. The two riders which accumulate the highest number of points over the heats go straight to the final. The next four highest point scorers take part in a race-off, with first and second place riders also progressing to the final. The winner of the final is declared British Under-21 Champion. Previous winners include former World Champions Mark Loram and Gary Havelock. The 2009 championship was won by Lewis Bridger who defeated defending champion Tai Woffinden in the final. Joe Haines was third and Ben Barker finished fourth.

The 2014 Speedway Grand Prix season was the 20th season of the Speedway Grand Prix era, and decided the 69th FIM Speedway World Championship. It was the fourteenth series under the promotion of Benfield Sports International, an IMG company. Tai Woffinden was the defending champion from 2013.

The 2015 Monster Energy FIM Speedway World Cup Race Off was the third race of the 2015 edition of the Speedway World Cup. It was run on June 11 at the Vojens Speedway Center in Vojens, Denmark and was won by Poland from Great Britain, the United States, and Russia. As a result, Poland progressed to the 2015 Speedway World Cup Final, where they will join hosts and defending champions Denmark, Event One winners Sweden and Event Two winners Australia. Great Britain finished second, but were eliminated from the competition along with the United States and Russia. 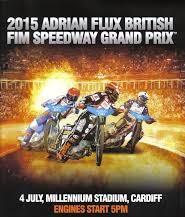 The 2016 British Speedway Championship is the 2016 edition of the British Speedway Championship. Tai Woffinden was the three-time defending champion having won the title in 2013, 2014 and 2015, however decided against competing in the 2016 event. The competition consisted of two semi-finals and a final. Seven riders qualified from each semi-final and were joined by two nominated wildcards in the decider. The final took place at the National Speedway Stadium in Belle Vue, Manchester on 13 June 2016, and was won by Danny King, his first title. He beat Craig Cook, who finished second for the third straight year, Robert Lambert and Steve Worrall in the final.

The 2007 Speedway Conference League was the third tier/division of British speedway.