Hipparchus proposed a correction to the Calippic cycle (of 76 years), which itself was proposed as a correction to the Metonic cycle (of 19 years). He may have published it in the book "On the Length of the Year" (Περὶ ἐνιαυσίου μεγέθους), which is lost. From solstice observations, Hipparchus found that the tropical year is about 1⁄300 of a day shorter than the 365+1⁄4 days that Calippus used (see Almagest III.1). So he proposed to make a 1-day correction after 4 Calippic cycles, such that 304 years = 3760 lunations = 111035 days. This is a very decent approximation for an integer number of lunations in an integer number of days (error only 0.014 days). But it is in fact 1.37 days longer than 304 tropical years: the mean tropical year is actually about 1⁄128 day (11 minutes 15 seconds) shorter than the Julian calendar year of 365+1⁄4 days. These differences cannot be corrected with any cycle that is a multiple of the 19-year cycle of 235 lunations: it is an accumulation of the mismatch between years and months in the basic Metonic cycle, and the lunar months need to be shifted systematically by a day with respect to the solar year (i.e. the Metonic cycle itself needs to be corrected) after every 228 years.[ citation needed ] Indeed, from the values of the tropical year (365.2421896698 days) and the synodic month (29.530588853) cited in the respective articles of Wikipedia, it follows that the length of 228=12×19 tropical years is about 83275.22 days, shorter than the length of 12×235 synodic months, namely about 83276.26 days, by one day plus about one hour. In fact, an even better correction would be to correcting by two days every 437 years, rather than one day every 228 years. The length of 437=23×19 tropical years, about 159610.837 days, is shorter than that of 23×235 synodic months, about 159612.833 days, by almost exactly two days, up to only six minutes.

An eclipse cycle constructed by Hipparchus is described in Ptolemy's Almagest IV.2. Hipparchus constructed a cycle by multiplying by 17 a cycle due to the Chaldean astronomer Kidinnu, so as to closely match an integer number of synodic months (4267), anomalistic months (4573), years (345), and days (126007 + about 1 hour); it is also close to a half-integer number of draconic months (4630.53...). By comparing his own eclipse observations with Babylonian records from 345 years earlier, he could verify the accuracy of the various periods that the Chaldean astronomers used. [ citation needed ]

The Hipparchic eclipse cycle is made up of 25 inex minus 21 saros periods. There are only three or four eclipses in a series of eclipses separated by Hipparchic cycles. For example, the solar eclipse of August 21, 2017 was preceded by one in 1672 and will be followed by one in 2362, but there are none before or after these. [1]

The Metonic cycle or enneadecaeteris is a period of approximately 19 years after which the phases of the moon recur at the same time of the year. The recurrence is not perfect, and by precise observation the Metonic cycle defined as 235 synodic lunar months is just 1 hour, 27 minutes and 33 seconds longer than 19 tropical years. Meton of Athens, in the 5th century BC, judged the cycle to be a whole number of days, 6,940. Using these whole numbers facilitates the construction of a luni-solar calendar.

The saros is a period of exactly 223 synodic months, approximately 6585.3211 days, or 18 years, 10, 11, or 12 days, and 8 hours, that can be used to predict eclipses of the Sun and Moon. One saros period after an eclipse, the Sun, Earth, and Moon return to approximately the same relative geometry, a near straight line, and a nearly identical eclipse will occur, in what is referred to as an eclipse cycle. A sar is one half of a saros.

The inex is an eclipse cycle of 10,571.95 days. The cycle was first described in modern times by Crommelin in 1901, but was named by George van den Bergh who studied it in detail half a century later. It has been suggested that the cycle was known to Hipparchos. One inex after an eclipse of a particular saros series there will be an eclipse in the next saros series, unless the latter saros series has come to an end. 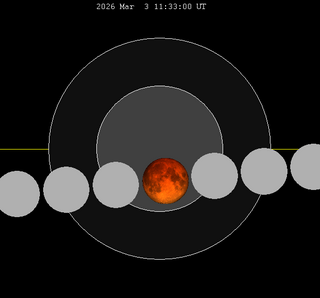 A total lunar eclipse will take place on 3 March 2026.

A total lunar eclipse will take place on June 26, 2029. A dramatic total eclipse lasting 1 hour and 42 minutes will plunge the full Moon into deep darkness, as it passes right through the centre of the Earth's umbral shadow. While the visual effect of a total eclipse is variable, the Moon may be stained a deep orange or red colour at maximum eclipse. This will be a great spectacle for everyone who sees it from most of the Americas and western Europe and Africa. The partial eclipse will last for 3 hours and 40 minutes in total.

A total lunar eclipse will take place on June 6, 2058. The moon will pass through the center of the Earth's shadow.

A total lunar eclipse will take place on May 6, 2069. The eclipse will be a dark one with the southern tip of the moon passing through the center of the Earth's shadow. This is the first central eclipse of Saros series 132. 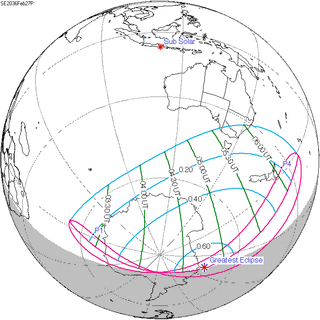