The Houston Comets were a Women's National Basketball Association (WNBA) team based in Houston, Texas, United States. Formed in 1997, the team was one of the original eight WNBA teams and won the first four championships of the league's existence. They are one of two teams in the WNBA that are undefeated in the WNBA Finals; the Seattle Storm are the other (however, the Storm are still in operation). The Comets were the first dynasty of the WNBA and are tied with the Minnesota Lynx and Seattle Storm for the most championships of any WNBA franchise. The team was folded and disbanded by the league in 2008 during the height of the Great Recession because new ownership could not be found. [1] [2] [3] [4]

The Comets were known for courting great women's basketball stars. The team had among its members Cynthia Cooper (the WNBA's first MVP); college and national team standout Sheryl Swoopes; Kim Perrot, who succumbed to cancer in 1999; and college stars Michelle Snow and Tina Thompson.

The Comets were one of the founding teams in the WNBA. They capped off the league's inaugural season in 1997 with a win over the New York Liberty in the WNBA championship game to win the WNBA's first championship.

When the league expanded the next season, the Comets were moved from the Eastern Conference to the Western Conference. In 1998, they put together a win loss record of 27-3 for a .900 winning percentage – a WNBA record that still stands. They went on to repeat as champions, defeating the Phoenix Mercury in the first-ever WNBA Finals that year due to the championship game being extended into a three-game championship series.

In 1999, led by what was already known as the Big Three, (Cynthia Cooper, Sheryl Swoopes and Tina Thompson), the Comets survived a highlight-film, last-second, court-to-court, game-winning shot by the Liberty's Teresa Weatherspoon in Game 2 of the finals to beat the Liberty in three games and win their third straight title, this one after the death of teammate Kim Perrot, who died of cancer.

In 2000, behind league MVP Sheryl Swoopes and eventual WNBA Finals MVP Cynthia Cooper, the Comets beat the New York Liberty in two games to win their fourth title in a row cementing themselves as the greatest WNBA team ever assembled. 2000 was the Comets' last championship and last WNBA Finals appearance in franchise history.

After Cooper retired in 2001, Houston clinched the playoffs with a 19–13 record, but lost in the first round in a sweep to the 2001 eventual champion Los Angeles Sparks. In 2002, when Swoopes was injured most of the year with a torn ACL, the Comets were able to qualify for the playoffs with a 24–8 record, but lost to the Utah Starzz in 3 games. In 2003, they qualified to the playoffs for the 7th straight year, but they lost in the first round to the Sacramento Monarchs in 3 games. They missed the playoffs for the first time in franchise history with a record of 13–21 in 2004, but returned to the playoffs with a 19–15 record, finishing 3rd. In the first round, the Comets knocked out the 2004 defending champion Seattle Storm in 3 games, but lost in the conference finals to the Sacramento Monarchs in a sweep, which Sacramento later became WNBA Champions in 2005. Houston would return to the playoffs with an 18–16 record, but lost to the 2005 defending champion Sacramento Monarchs in another sweep. 2006 was the last playoff appearance for the Houston Comets. After the Comets' season ended in 2006, the Comets underwent major front-office changes during the off-season. In October 2006, team owner Leslie Alexander (who also owned the NBA's Houston Rockets) announced he was selling the Comets, and longtime head coach Van Chancellor resigned in January 2007.

On January 31, 2007, the WNBA Board of Governors approved the sale of the team to Hilton Koch, a Houston-based mattress and furniture businessman. Two weeks later, Comets assistant coach Karleen Thompson was named to become the team's new head coach and general manager for the 2007 season.

For the 2007 season, they would miss the playoffs for the second time in franchise history after starting the season 0-10, resulting in a 13–21 record.

In 2008, Koch put the team up for sale, with an asking price of $10 million. No investors stepped up. The WNBA took over management of the Comets and disbanded the team in December 2008. [7] They stated that they would only be suspending operations in 2009, which some people saw as a sign that the franchise could be revived if an investor came in. Comets players were sent off to other teams in a dispersal draft. [8]

The Comets played their final home game on September 15, 2008 at the Strahan Coliseum on the campus of Texas State due to Hurricane Ike. They defeated the Sacramento Monarchs 90–81. They finished the season 17-17 and missed the playoffs for the third time in their history. [6]

The Women's National Basketball Association (WNBA) is a professional basketball league in the United States. It is currently composed of twelve teams. The league was founded on April 22, 1996, as the women's counterpart to the National Basketball Association (NBA), and league play started in 1997. The regular season is played from May to September, with the All Star game being played midway through the season in July and the WNBA Finals at the end of September until the beginning of October. Due to the COVID-19 pandemic, plans to hold a midseason tournament, the Commissioner's Cup, starting in the 2020 season were placed on hold until 2021. Initially, regular-season Cup games were to be played through early July, followed by a final match in August. The pandemic also led to the entire 2020 season being held without fans at the IMG Academy in Bradenton, Florida.

The Los Angeles Sparks are an American professional basketball team based in Los Angeles, California. The Sparks compete in the Women's National Basketball Association (WNBA) as a member club of the league's Western Conference. The team was founded before the league's inaugural 1997 season began. Like some other WNBA teams, the Sparks have the distinction of not being affiliated with an NBA counterpart, even though the market is shared with the Los Angeles Lakers and the Los Angeles Clippers. As of 2020, the Sparks are the most recent franchise to win back-to-back titles.

Kim Perrot was an American basketball player. She played in the WNBA for the Houston Comets.

The WNBA Finals are the championship series of the Women's National Basketball Association (WNBA) and the conclusion of the league's postseason each fall. The series was named the WNBA Championship until 2002. Starting 2016 Verizon is the official sponsor. 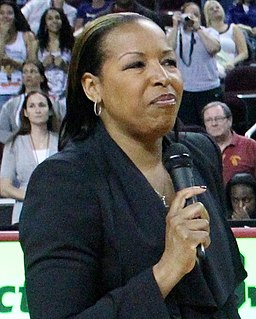 Cynthia Lynne Cooper-Dyke is an American basketball coach and former player who has won championships in college, in the Olympics, and in the Women's National Basketball Association (WNBA). She is considered by many as one of the greatest basketball players ever. In 2011, Cooper-Dyke was voted by fans as one of the Top 15 players in WNBA history. Upon the league's formation, she played for the Houston Comets from 1997 to 2000, being named the Most Valuable Player of the WNBA Finals in all four seasons, and returned to play again in 2003. Cooper-Dyke still holds the record for most Finals MVPs with four. On April 30, 2019, she was introduced as the head coach for the Texas Southern Lady Tigers basketball team, a position she held in the 2012–13 season. She has also coached at USC, UNC Wilmington, Prairie View A&M, and, professionally, for the Phoenix Mercury. Cooper-Dyke was inducted into the Women's Basketball Hall of Fame in 2009.

Sheryl Denise Swoopes is an American former professional basketball player. She was the first player to be signed in the WNBA, is a three-time WNBA MVP, and was named one of the league's Top 15 Players of All Time at the 2011 WNBA All-Star Game. Swoopes has won three Olympic gold medals and is one of eleven women's basketball players to have won an Olympic gold medal, an NCAA Championship, and a WNBA title. She was elected to the Naismith Memorial Basketball Hall of Fame in 2016. In 2017, she was inducted into the Women's Basketball Hall of Fame.

Van Winston Chancellor is a former college and professional basketball coach. He coached University of Mississippi women's basketball, Louisiana State University women's basketball, and the professional Houston Comets. He was named head coach of the Lady Tigers on April 11, 2007, replacing Pokey Chatman. In 2001, Chancellor was elected to the Women's Basketball Hall of Fame, located in Knoxville, Tennessee. He was enshrined as a member of the Naismith Memorial Basketball Hall of Fame in September 2007. Chancellor currently serves as an analyst for Southland Conference games on ESPN3.

The following are the basketball events of the year 2000 throughout the world.

The following are the basketball events of the year 1999 throughout the world.

The Women's National Basketball Association's All-Decade Team were chosen in 2006 on the occasion of the tenth anniversary of the WNBA from amongst 30 nominees compiled by the league by fan, media, coach, and player voting. The team was to comprise the 10 best and most influential players of the first decade of the WNBA, with consideration also accorded to sportsmanship, community service, leadership, and contribution to the growth of women's basketball; only players to have competed in the WNBA were eligible, but extra-league achievements were considered.

The 1997 WNBA Season was the Women's National Basketball Association's first in existence. It started off with 8 franchises: Charlotte Sting, Cleveland Rockers, Houston Comets, Los Angeles Sparks, New York Liberty, Phoenix Mercury, Sacramento Monarchs, and the Utah Starzz. It featured an inaugural game between the New York Liberty and the Los Angeles Sparks. The Sparks lost to the New York Liberty, 67–57. The attendance at the Forum was 14,284. The season ended with the Comets defeating the Liberty in a one-game series 65–51. Cynthia Cooper was named MVP of the game.

The 1997 WNBA season was the first season for the Houston Comets. The Comets won the inaugural WNBA Finals.

The 1999 WNBA season was the third season for the Houston Comets. The Comets won their third WNBA Finals.

The 2000 WNBA season was the fourth season for the Houston Comets. The Comets won their fourth WNBA Finals and their last title in franchise history before disbanding in 2008.

Karleen M. Thompson is the associate head coach of the Virginia Cavaliers women's basketball team since 2018. Before joining the Cavaliers, Thompson was a WNBA head coach for the Los Angeles Sparks in 2004 and the Houston Comets from 2007 to 2008. Additionally, Thompson was an assistant coach for the Clemson Tigers women's basketball team from 2010 to 2013 and the Atlanta Dream from 2013 to 2017.