The J.League Player of the Year is awarded by the J.League. 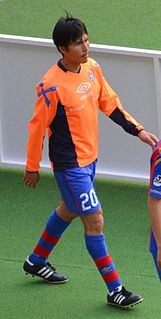 The 2011 Júbilo Iwata season was Júbilo Iwata's 18th consecutive season in J.League Division 1 and 29th overall in the Japanese top flight. It also included the 2011 J.League Cup, and the 2011 Emperor's Cup.

The 2013 Nagoya Grampus season was Nagoya Grampus' 21st season in the J. League Division 1 and 31st overall in the Japanese top flight. It was Dragan Stojković last season as manager, as he left at the end of the season, and they finsed 11th in the J League, reached the group stage of the J. League Cup and were knocked out of the Emperor's Cup at the second round stage by Nagano Parceiro.