A Japanese variety show is an entertainment television program made up of a variety of original stunts, musical performances, comedy skits, quiz contests, and other acts. Japanese variety shows are predominantly made to be weird and extremely fast-paced for entertainment purposes and are primarily scheduled during prime television time. They usually feature a variety of hosts that include, but are not limited to celebrities, comedians, J-pop Idols, and so on. [1]

Japanese variety shows have been around since the 1950s and there are many of them. There are variety shows that deal with eating weird foods to playing weird games. Japanese variety shows are seen abroad and Japan can be stereotyped because of these shows. There are a variety of memes that are circulating around the world that try to show how "weird" Japan is. People were drawn to these quiz like shows with their bizarre questions and impossible scenarios. Watching people make fools of themselves was extremely entertaining and to think it all started with a basic game show that was similar to charades called "Gesture". The second longest-running Japanese television show, which is a comedy, is Shōten which began running in 1966 on Nippon TV. Television in Japan made a big impact in the 1930s but then was put to a halt because of WWII. [2] [ circular reference ] After WWII NHK and Nippon television were able to start up again around 1953. One of the first shows to have started on Nippon TV was Downtown no Gaki no Tsukai ya Arahende!!, which started in 1989 and is still running to this day with 1378 episodes as of Oct 29, 2017. Takeshi's Castle is yet another older show that had aired between 1986 and 1990 with 133 episodes total. [3] [ circular reference ]

Japanese television programs such as Music Station and Utaban (cancelled 2010) continue in an almost pristine format from the same variety shows of years before. The only major changes have been the increasing disappearance of live backup music since the 1980s.

A once-popular host Kyosen Ōhashi said, "Weird shows that are called Variety only exists in Japan." [4]

One of the more well-circulated clips is a segment in Gaki no Tsukai, hosted by the comedy duo Downtown. In one part, if the male contestants fail to say a tongue-twister correctly, they get hit in the crotch by a spring-loaded pole (The Chinko Machine, or, literally, the Penis Machine), causing great pain. Hitoshi Matsumoto attempted to withdraw but the host - his comedy partner and co-host Masatoshi Hamada, cajoled him back on the platform. [5] [6]

Japanese game shows have been known for including very cruel challenges, with Hollywood Reporter even stating in 2008 "the Japanese have elevated cruelty to an art form." [7] In 2002, it was acknowledged that these game show challenges had caused physical injuries to some contestants. [8] Some of these Japanese game show injuries even included spinal injuries. [8] In 2014, Japanese game shows were still acknowledged for having cruel challenges under the guise of comedy. [9] [10] In the United States of America in December 1994, Saturday Night Live mocked these unique forms of game shows with a sketch called Quiz Kings. [7] [11] They were also mocked in a May 1999 episode of The Simpsons called Thirty Minutes Over Tokyo. [10]

Japanese game shows have gained popularity around the world in recent years. A notable example is Hole in the Wall, or Brain Wall , which has had local versions in Russia, China, Argentina, Australia, America and Britain. The latter two are the most successful versions, with the FOX network and Cartoon Network each having decent success with US versions of the format. The BBC would also find success with their own version in the UK.

With foreign game shows gaining interest from American viewers, in 2008, ABC would create and broadcast two game shows that took influence from Japanese game shows. The first of which was Wipeout , a weekly competition show that involved contestants playing in a large obstacle course. The other was I Survived a Japanese Game Show , which was a reality show that used a fictional Japanese game show to eliminate contestants one by one until the last player standing won a grand prize. [12] Due to the similarities between their shows and other Japanese programs, ABC has been sued by TBS (Tokyo Broadcasting System) for allegedly copying Sasuke and Takeshi's Castle . [13]

Takeshi's Castle is a Japanese game show that aired between 1986 and 1990 on the Tokyo Broadcasting System. It features the Japanese comedian Takeshi Kitano as a count who owns a castle and sets up difficult challenges for players to get to him. The show has become a cult television hit around the world. A special live "revival" was broadcast on April 2, 2005, for TBS's 50th anniversary celebrations.

Downtown is a Japanese comedy duo from Amagasaki, Hyōgo consisting of Hitoshi Matsumoto and Masatoshi Hamada. Formed in 1982, they are one of the most influential and prolific comedy duos in Japan today. They are best known for their stand-up acts, hosting numerous Japanese variety shows and their sarcastic, short-tempered stage personas. They are a mixed race of Korean and Japanese.

Hitoshi Matsumoto, or Matchan as he is commonly known, is one of Japan's most popular comedians and TV hosts. He is one half of the comedy duo Downtown alongside Masatoshi Hamada. Like Hamada, Matsumoto was born and raised in Amagasaki, Hyōgo Prefecture.

Masatoshi Hamada is a Japanese comedian best known as the tsukkomi half of the popular owarai duo Downtown alongside Hitoshi Matsumoto. His nickname is Hama-chan (浜ちゃん). Hamada is married to Natsumi Ogawa, with whom he has two children. 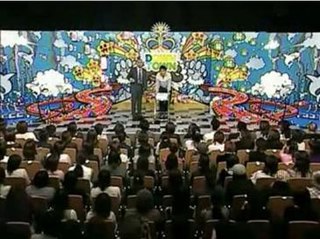 Events in 2009 in Japanese television.

Events in 2010 in Japanese television.

Events in 1996 in Japanese television.

Events in 1992 in Japanese television.

Events in 1993 in Japanese television.

Events in 1995 in Japanese television.

Events in 1998 in Japanese television. 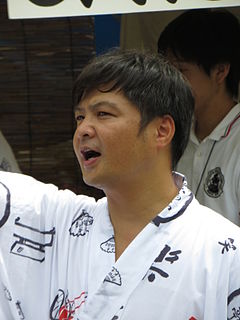 Events in 1999 in Japanese television.

Events in 2007 in Japanese television.

Events in 2004 in Japanese television.

Events in 2001 in Japanese television.

Cocorico is a Japanese comedy duo (kombi) formed in 1992, consisting of Shōzō Endō and Naoki Tanaka. They are best known for making up the cast of the popular and long-running variety show, Downtown no Gaki no Tsukai ya Arahende!!.

"The staff ate it later" is an annotation (Telop) that displays on the screen when a dish or food appears on a Japanese TV program. This indicates that the dish and ingredients were eaten without wasting them; however, some people question their authenticity. In addition, there is an opinion that the display of this annotation has lowered the quality of the TV program.