Last updated January 12, 2021
Overview of the events of 1963 in Japanese television

One Piece is a Japanese manga series written and illustrated by Eiichiro Oda. It has been serialized in Shueisha's Weekly Shōnen Jump magazine since July 1997, with its individual chapters compiled into 97 tankōbon volumes as of September 2020. The story follows the adventures of Monkey D. Luffy, a boy whose body gained the properties of rubber after unintentionally eating a Devil Fruit. With his crew of pirates, named the Straw Hat Pirates, Luffy explores the Grand Line in search of the world's ultimate treasure known as "One Piece" in order to become the next King of the Pirates. 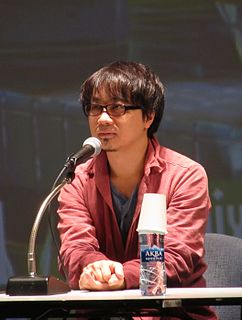 Makoto Niitsu, also known as Makoto Shinkai, is a Japanese animator, filmmaker and manga artist best known for directing Your Name, the third highest-grossing anime film of all time and 2019's Weathering With You, among other works such as The Garden of Words, Children Who Chase Lost Voices and 5 Centimeters per Second. He was listed by Variety as one of 10 animators to watch in 2016. 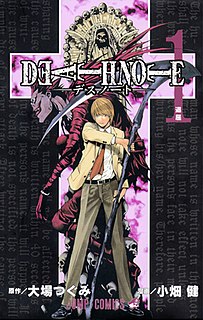 Death Note is a Japanese manga series written by Tsugumi Ohba and illustrated by Takeshi Obata. The story follows Light Yagami, a teen genius who stumbles across a mysterious otherworldly notebook: the "Death Note", which belonged to the Shinigami Ryuk and grants the user the supernatural ability to kill anyone whose name is written in its pages. The series centers around Light's subsequent attempts to use the Death Note to carry out a worldwide massacre of individuals whom he deems morally unworthy of life to change the world into a utopian society without crime, using the alias of a god-like vigilante named "Kira" and the subsequent efforts of an elite task-force of law enforcement officers, consisting of members of the Japanese police force, led by L, an enigmatic international detective whose past is shrouded in mystery, to apprehend him and end his reign of terror.

Rintaro is the pseudonym of Shigeyuki Hayashi, a well-known director of anime. He works frequently with the animation studio Madhouse, though he is a freelance director not employed directly by any one studio. He began working in the animation industry—at age 17—as an in-between animator on the 1958 film Hakujaden. His works have won and been nominated for multiple awards, including a nomination for Best Film (Metropolis) at the 2001 Festival de Cine de Sitges.

Grappler Baki, known as Baki the Grappler in North America, is a manga series written and illustrated by Keisuke Itagaki. It was originally serialized in Weekly Shōnen Champion from 1991 to 1999 and collected into 42 tankōbon volumes by Akita Shoten. The story follows teenager Baki Hanma as he trains and tests his fighting skills against a variety of different opponents in deadly, no rules hand-to-hand combat.

Margaret, stylized in Latin script between 1988 and 1990, is a biweekly Japanese shōjo manga magazine published by Shueisha, primarily for girls from 11 to 15 years old, although some stories are read by older teenage girls and adult women.

AnimeIowa is an annual three-day anime convention held during July at the Coralville Marriott Hotel & Conference Center in Coralville, Iowa. The staff are all volunteers and the convention is run by the non-profit Mindbridge Foundation.

Hitoshi Doi is the owner of an English language anime and voice actor information website, which was established on June 10, 1994.

Haruhi Suzumiya is a Japanese light novel series written by Nagaru Tanigawa and illustrated by Noizi Ito. It was first published in 2003 by Kadokawa Shoten in Japan with the novel The Melancholy of Haruhi Suzumiya, and has since been followed by 11 additional novel volumes, an anime television series adaptation produced by Kyoto Animation, four manga series, an animated film, two original net animation series and several video games.

Reiko Shimizu is a Japanese shōjo manga writer and illustrator. She made her professional debut in 1983 with Sansaro Monogatari in LaLa, and has written primarily for the publisher Hakusensha. She is noted for her works of science fiction and her art style, and is also known for her illustrations of tarot cards called the Miracle Tarot deck.

Space Brothers is a Japanese manga series by Chūya Koyama which has been serialized in Kodansha's Weekly Morning since December 2007. It has been nominated twice for the Manga Taishō, in 2009 and 2010. An anime adaptation by A-1 Pictures aired in Japan from April 1, 2012 to March 22, 2014. It was adapted into a live action film that premièred on May 5, 2012. An anime film premièred on August 9, 2014, titled Space Brothers #0.

Suzuko Mimori is a Japanese actress, voice actress and singer from Tokyo, Japan. She is represented by Hibiki Cast. She voiced Umi Sonoda in Love Live! and Hikari Kagura in Revue Starlight. Her nickname is Mimorin.

Date A Live is a Japanese light novel series written by Kōshi Tachibana and illustrated by Tsunako. Fujimi Shobo published 22 volumes from March 2011 to March 2020 under their Fujimi Fantasia Bunko imprint.