Takeshi Aono was a Japanese actor, voice actor and narrator from Asahikawa, Hokkaidō. He was attached to Aoni Production at the time of his death. He graduated from Hokkaidō Asahikawa Higashi High School.

Masaharu Maeda, known by the stage name Shigeru Chiba, is a Japanese actor, voice actor, talent and sound director from Kikuchi, Kumamoto. He is affiliated with the talent management firm 81 Produce.

Masako Nozawa is a Japanese actress, voice actress and narrator. Throughout her life, she has been affiliated with Production Baobab, 81 Produce and self-owned Office Nozawa; she is also affiliated with Aoni Production. Her late husband, Masaaki Tsukada, was also a voice actor.

Michihiro Ikemizu is a Japanese actor, voice actor and narrator from Kanagawa Prefecture and a graduate of Waseda University who works for Aoni Production.

Hirō Hase, better known by the stage name Sanji Hase, was a Japanese voice actor and the father of Macross star Arihiro Hase. He died of lung cancer on March 8, 2002 at the age of 66. At the time of his death he was a free agent, but he had been previously represented by Aoni Production. 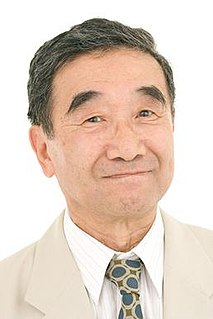 Ryūji Saikachi was a Japanese actor and voice actor, known for his roles as Matthew Cuthbert in Anne of Green Gables, Old Person in Paranoia Agent, and Dwarf in The Wonderful Adventures of Nils.

Fujio Akatsuka was a pioneer Japanese artist of comical manga known as the Gag Manga King. His name at birth is 赤塚 藤雄, whose Japanese pronunciation is the same as 赤塚 不二夫.

Yūko Mita is a Japanese actress and voice actress from Setagaya, Tokyo, Japan. She is known for playing gentle, sexy bishōjo as well as many roles of young boys. Her hobbies include tennis and skiing. She is employed by the talent management firm Aoni Production.

Isamu Tanonaka was a Japanese actor, voice actor and narrator from Taitō, Tokyo. He was best known for voicing Medama Oyaji in nearly every adaptation of Shigeru Mizuki's GeGeGe no Kitarō made during his lifetime. 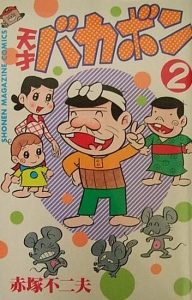 Tensai Bakabon is a Japanese manga series written and illustrated by Fujio Akatsuka, which began publication on April 9, 1967, in Weekly Shōnen Magazine. It is about the misadventures of a dim-witted boy (Bakabon) and his idiotic father, the latter of whom eventually becomes the central character.

Comic BomBom was a monthly Japanese manga magazine published by Kodansha and targeted at elementary school boys. Each issue had 700+ pages, with 80 of them being full-color advertisements. Similar to its rival CoroCoro Comic, it featured tie-ins with game makers and toy makers but toward the end of its run had less of that.

Eken Mine was a Japanese actor and voice actor from Nagasaki.

Reizō Nomoto was a Japanese voice actor from Tokyo, Japan. His birth name was Reijiro Nomoto. On July 7, 2006, Nomoto vomited blood at home and - after having been transported to the hospital - died. The cause of his death is unknown. He was 75 years of age.

Junko Hori is a Japanese actress and voice actress represented by Production Baobab.

Katsue Miwa is a Japanese voice actress from Osaka affiliated with the studio Aoni Production. She began her career in 1960 and has since starred in a number of voice-over roles for various anime, video games, films, and television commercials.

Shin-Ei Animation Co., Ltd. is a Japanese animation studio owned by TV Asahi. Founded in Tokyo in 1976, it is the successor to A Production, a previous animation venture by its founder, Daikichirō Kusube, who was previously an animator for Toei Animation. Shin-Ei is known for being the animation studio behind two of the anime television series: Doraemon and Crayon Shin-chan, which still run on Japanese TV since 1979 and 1992 respectively. In April 2017, SynergySP became a subsidiary of the company.