This is a list of years in television . It lists some important events in the history of television, as well as the first broadcasts of many television shows, the launches of some television channels and networks, and the debuts of some web series. 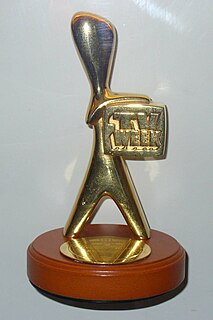 M-Net is a South African pay television channel established by Naspers in 1986. The channel broadcasts both local and international programming, including general entertainment, children's series, sport and movies. While the TV signal is generally encrypted, M-Net showed some programmes 'free to air' in its "Open Time" slot between 5 p.m. and 7 pm, until the slot closed on 1 April 2007.

TVR1 is the main channel of the Romanian public broadcaster TVR.

Star Trek is an American science fiction media franchise originating from the 1960s television series Star Trek, created by Gene Roddenberry. That series, now often known as "The Original Series", debuted on September 8, 1966, and aired for three seasons on NBC. It followed the voyages of the starship USS Enterprise, a space exploration vessel built by the United Federation of Planets in the 23rd century, on a mission "to explore strange new worlds, to seek out new life and new civilizations, to boldly go where no man has gone before". In creating Star Trek, Roddenberry was inspired by C. S. Forester's Horatio Hornblower series of novels, Jonathan Swift's 1726 novel Gulliver's Travels, the 1956 film Forbidden Planet, and television westerns such as Wagon Train.

Children's programming has played a part in NBC's programming since its initial roots in television. This article outlines the history of children's television programming on NBC including the various blocks and notable programs that have aired throughout the television network's history.

10 Peach is an Australian free-to-air television channel operated by Network 10. It was launched on 11 January 2011 as Eleven. It is owned by ElevenCo, which was established as a joint venture between Ten Network Holdings and ViacomCBS Domestic Media Networks; the latter would ultimately acquire Ten Network in 2017.

This article is a summary of 1978 in Australian television.

Disney XD was an Indian pay television channel, which was launched on 14 November 2009 replacing Jetix. The network was the Indian equivalent to the original American network. The channel was replaced by Marvel HQ on 20 January 2019 at 12 PM.

Discovery Kids is a television channel for kids in India launched 7 August 2012 by Discovery India, a division of Discovery Networks Asia Pacific.The channel is the Indian equivalent to the original American network.It started malayalam and kannada Feeds in Mid-2019.

This article includes a television-related list of lists.
This page is based on this Wikipedia article
Text is available under the CC BY-SA 4.0 license; additional terms may apply.
Images, videos and audio are available under their respective licenses.