Ein Herz und eine Seele (literally "One Heart and One Soul" i.e. "hand in glove") is a German cult sitcom based on the British sitcom Till Death Us Do Part by Johnny Speight. The show premiered on 15 January 1973 and lasted for about twenty episodes, airing its last on 4 November 1974. In 1976 the show had a short-lived revival with another four episodes. Ein Herz und eine Seele was written by Wolfgang Menge.

The show was extremely successful during its initial run and it still proves very popular in reruns. Two episodes in particular, Sylvesterpunsch (about the family's New Year's Eve party) and Rosenmontagszug (set during the winter carnival season) have gained such popularity that they are now shown traditionally on German TV on New Year's Eve and Rosenmontag , respectively.

The show reflects the life of a petty bourgeois family in West German Wattenscheid, characterised by the social climate of the Willy Brandt era and its political upheavals initiated by the German student movement of 1968. Ein Herz und eine Seele makes intensive use of references to German politics and social issues of the early and mid-1970s, when Germany was still divided, not just between East and West, but also (in the case of West Germany) between liberals and conservatives. To feature these tensions in a TV series broke new ground at that time.

The undisputed star is Ekel ("creep") Alfred Tetzlaff (Heinz Schubert), commercial clerk, a born Sudeten German, Bild reader and reactionary patriarch, who is constantly arguing with his wife Else, his daughter Rita, and his son-in-law Michael. He is a declared foe of the SPD government ruining the country only to sell it to the Mongols, of foreigners, Gastarbeiter , Jews and the women's movement. During his term of service in the Wehrmacht he had spent time in Paris, which finds expression in his (dubious) language skills. Alfred's appearance, small in physique with a moustache and side-parted hair, along with his passionate politicking with a high-pitched voice and frequent hand movements, make his character somewhat reminiscent of Adolf Hitler. Raised in Berlin he is a dedicated fan of Hertha BSC, which makes life somewhat hard in the Ruhr area.

Alfred is married (afflicted) with Else, a housewife from Elmshorn, whose fatuity constantly drives him mad. She ceaselessly speaks up, confusing Pompidou with Pompadour and Kiesinger with Kissinger, honestly astonished that the Germans had elected a Jewish chancellor. (In this sense, although the German Else was named after the British version of the character, the quiet but sometimes snarky Else Garnett, the character more closely resembled Edith Bunker from the American version of the show, All in the Family .) Ironically, Alfred's use of "dusselige Kuh", literally "silly cow", as a nickname for Else was not allowed in the BBC original: the British character Alf Garnett had to refer to his wife as a "silly moo".

The young couple, Rita and her husband Michael, cannot afford an apartment and live in Rita's child's room. Michael is a supporter of Chancellor Willy Brandt and moreover was raised in East Germany, which arouses Alfred's suspicion of him being a Komsomol, a Bolshevik hyena and an anarchist. Michael's parents still live in East Germany; as retirees they are allowed to visit their son and his new family in the episode Besuch aus der Ostzone ("Visit from the Eastern Zone"), an episode which exists both in black-and-white and colour and is usually aired on German Unity Day.

The show was originally broadcast in black and white and shown on the regional channel of the North Rhine-Westphalia area, WDR. It moved to Germany's first channel, ARD, on New Year's Eve 1973 with the above-mentioned episode and from that date was produced in colour. Some of the colour episodes are actually remakes or reprises of older black-and-white episodes. The first series is considered to consist of 21 episodes. For the second series, Elisabeth Wiedemann, extremely popular in her role as Else Tetzlaff, was replaced by Helga Feddersen and Michael, formerly played by Diether Krebs, was portrayed by Klaus Dahlen.

The audience clearly did not approve of these changes: after only four episodes of the second series, Ein Herz und eine Seele was cancelled. According to the BBC website, the series was not popular due to the reactionary politics of its lead character. Yet the series, despite its polarization and abusive language, was very popular with up to 15.7 million viewers. It declined in the ratings due to the cast changes in the second series. In 2002, a survey showed the program was Germany's most popular sitcom of all time.

In 2004 the complete series was released to DVD and was a best seller. 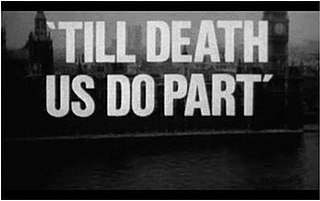 Till Death Us Do Part is a British television sitcom that aired on BBC1 from 1965 to 1975. The show was first broadcast as a Comedy Playhouse pilot, then in seven series until 1975. Six years later in 1981, ITV continued the sitcom for six episodes, calling it Till Death.... The BBC produced a sequel from 1985 until 1992, In Sickness and in Health.

In Sickness and in Health is a BBC television sitcom which ran between 1 September 1985 and 3 April 1992. It was a sequel to the highly successful Till Death Us Do Part, which ran between 1966 and 1975, and Till Death..., which ran for one series of six episodes in 1981. The series had 47 episodes, and unlike its predecessor, all the episodes have survived and are available on DVD. The final show was broadcast in 1992.

Johan Marius Nicolaas Heesters professionally known as Johannes Heesters, was a Dutch actor of stage, television and film, as well as a vocalist of numerous recordings and performer on the concert stage with a career dating back to the 1920s. Heesters worked as an actor until his death and is one of the oldest performing entertainers in history, performing shortly before his death at the age of 108. Heesters was almost exclusively active in the German-speaking world from the mid-1930s and became a film star in Nazi Germany, which later led to controversy in his native country. He was able to maintain his popularity in Germany in the decades until his death.

Alfred Edward "Alf" Garnett is a fictional character from the British sitcom Till Death Us Do Part and its follow-on and spin-off series Till Death... and In Sickness and in Health. He also appeared in the chat show The Thoughts of Chairman Alf. The character was created by Johnny Speight and played by Warren Mitchell.

The Dustbinmen is a British television sitcom made by Granada Television for ITV, which starred Bryan Pringle, Trevor Bannister, Graham Haberfield and Tim Wylton. The show was a spin-off from a one-off 90-minute television film There's a Hole in Your Dustbin, Delilah (1968) written by Jack Rosenthal and directed by Michael Apted. This led to the sitcom which ran for three series between 1969 and 1970. Rosenthal wrote all of the episodes of the first two series.

Diether Krebs was a German actor, cabaret artist and comedian.

Katts and Dog is a French and Canadian-produced television series which ran from 1988 to 1993. It was known as Rin Tin Tin: K-9 Cop in the United States where it originally aired on CBN Cable/The Family Channel and Rintintin Junior in France on La Cinq. CTV broadcast the series within Canada.

Hand aufs Herz is a German television soap opera and premiered on October 4, 2010 on the private broadcasting station Sat.1. It got canceled in June 2011, announcing the series finale for September 5, 2011. However that changed when Sat.1 decided to drop the show from its line-up and sixx was announced to air the remaining episodes; with a one-hour series finale on September 2, 2011.

Elisabeth Wiedemann was a German actress and best known for her role as Else Tetzlaff in Ein Herz und eine Seele.

Hildegard Krekel was a German actress.

Wolfgang Rademann was a German television producer and journalist.