Last updated November 13, 2022
Dean of Westminster and a chaplain to Queen Elizabeth II
For those of a similar name, see John Hall (disambiguation).

John Robert Hall KCVO CStJ FSA FRSA (born 13 March 1949) is an English retired priest of the Church of England. He was the Dean of Westminster and a chaplain to Queen Elizabeth II.

His parents were Ronald John Hall and Katie Margaret Brock Walker. [1] He was educated at St Dunstan's College, Catford and St Chad's College, University of Durham (BA). Following two years as a teacher he studied for ordination at Cuddesdon Theological College, Oxford. [2] [3]

At various times Hall has been a governor of 10 schools and two universities, a member of two local authority education committees and of the General Teaching Council for England. He has written widely and debated publicly on educational matters and was instrumental in the production of the Dearing Report in 2001 and its follow-up, which led to a significant expansion in the number of Church of England secondary schools. As Dean of Westminster he chaired the governors of Westminster School and Westminster Abbey Choir School.

He was installed by Roehampton University as pro-chancellor of the university in March 2011.

Hall's appointment as Dean of Westminster was announced in November 2006 [4] and he assumed office in December 2006. On 29 April 2011 he officiated at the wedding of Prince William of Wales and Catherine Middleton. On 28 September 2018, Hall's retirement was announced for 1 November 2019. [5]

In July 2007, Hall was awarded an honorary Doctor of Divinity (DD) degree by Roehampton University. He received the honorary degree of Doctor of Theology (Hon DTheol) from the University of Chester in March 2008. 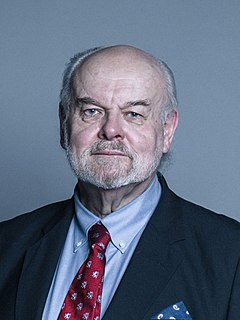 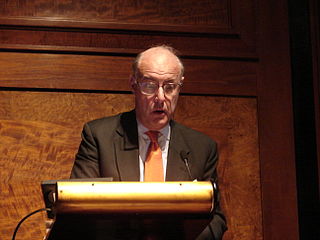 Sir David Nicholas Cannadine is a British author and historian who specialises in modern history, Britain and the history of business and philanthropy. He is currently the Dodge Professor of History at Princeton University, a visiting professor of history at Oxford University, and the editor of the Oxford Dictionary of National Biography. He has been the president of the British Academy since 2017, the UK's national academy for the humanities and social sciences. He also serves as the chairman of the trustees of the National Portrait Gallery in London and vice-chair of the editorial board of Past & Present.

Sir Thomas Woodcock Hon FRHSC is the senior herald and genealogist at the College of Arms in London. He is a former Garter Principal King of Arms and a former member of the Royal Household.

Michael Clement Otway Mayne, was an English priest of the Church of England who served as the Dean of Westminster.

Charles James Dugdale, 2nd Baron Crathorne, was Lord Lieutenant of North Yorkshire from 1999 until 2014. He is also one of the ninety hereditary peers elected to remain in the House of Lords after the passing of the House of Lords Act 1999, sitting as a Conservative. In 1977, he succeeded to his father's title. 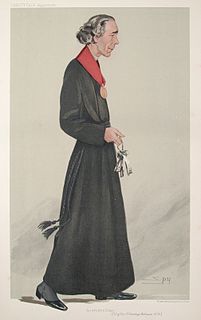 Robert William Grimley is a Church of England priest. He was Dean of Bristol from 1997 to 2009.

Victor Andrew Stock AKC is a retired English Anglican priest. He was the Dean of Guildford in the Church of England. Apart from his being an Associate of King's College, he is also a member of the Order of Australia (OAM), an (Honorary) Doctor of the University of Surrey, and Fellow of the Royal Society of Arts (FRSA). He is now Priest Vicar of Westminster Abbey.

Donald Clifford Gray is a British Anglican priest, chaplain, and academic. From 1987 to 1998, he was Chaplain to the Speaker of the House of Commons and Rector of St Margaret's, Westminster.

Warwick James Rodwell is an archaeologist, architectural historian and academic. He was lately Visiting Professor in the Department of Archaeology, University of Reading, and is Consultant Archaeologist to Westminster Abbey, where he is also a member of the College of St Peter in Westminster. He is the author of many books and articles, including the standard textbook on church archaeology. He is a Fellow of the Society of Antiquaries of London, the Society of Antiquaries of Scotland and the Royal Historical Society.

Jane Barbara Hedges is a British Anglican priest. Considered a "trailblazer for women in the priesthood", she served as Dean of Norwich from 2014 to 2022 and was appointed Acting Dean of Canterbury in June 2022.

Peter John Galloway, is a British Anglican priest and historian, specialising in ecclesiastical history, architectural history, and the British orders of chivalry. From 2008 to 2019, he was Chaplain of the Queen's Chapel of the Savoy and Chaplain of the Royal Victorian Order. His is also a visiting professor of Brunel University London.

Wikimedia Commons has media related to John Hall (priest) .
This page is based on this Wikipedia article
Text is available under the CC BY-SA 4.0 license; additional terms may apply.
Images, videos and audio are available under their respective licenses.