David Michael Hoyle MBE (born 1957) is a British Anglican priest and academic who was appointed the 39th Dean of Westminster in 2019, having previously served as Dean of Bristol from 2010 to 2019.

Hoyle was born in 1957 in Waterfoot, Lancashire, England, the son of Michael and Yvonne Hoyle. [1] He was educated at Watford Grammar School for Boys, then an all-boys state grammar school in Watford, Hertfordshire. [2] He studied history and theology at Corpus Christi College, Cambridge, graduating with a Bachelor of Arts (BA) degree in 1980: as per tradition, his BA was promoted to a Master of Arts (MA Cantab) degree in 1983. [1] [3] From 1984 to 1986, he trained for ordination at Ripon College, Cuddesdon. [4] He continued his studies at Magdalene College, Cambridge, completing his Doctor of Philosophy (PhD) degree in 1991. [4] His doctoral thesis was titled "Near popery yet no popery: theological debate in Cambridge 1590-1644". [5]

Hoyle was ordained in the Church of England as a deacon in 1986 and as a priest in 1987. [4] His first post was as curate of the Church of the Good Shepherd in Chesterton, Cambridge, [6] after which he was a Fellow and chaplain (later Dean) of Magdalene College, Cambridge. He was vicar of Christ Church in Southgate, London, [7] and then Director of Ministry for the Diocese of Gloucester and residentiary canon of Gloucester Cathedral [6] until his appointment to the deanery in 2010. [8]

He was installed as Dean of Bristol on 29 May 2010. [9] [10] On 19 June 2019, it was announced that he had been appointed Dean of Westminster, and he took up his appointment on 16 November 2019 following the retirement of John Hall. [11] Four months later, Westminster Abbey was obliged to close its doors due to the COVID-19 pandemic, dealing what Hoyle described as a "shattering blow" to its finances, given that 90% of its income came from visitors' entrance fees. [12]

Hoyle conducted the State Funeral of Queen Elizabeth II on 19 September, 2022 at Westminster Abbey following the rubric of the 1662 Book of Common Prayer. [13] At the beginning of the service Hoyle gave the bidding and then the blessing at the end.

Hoyle was appointed Member of the Order of the British Empire (MBE) in the 2020 New Year Honours for services to faith and vulnerable communities in Bristol. [14] 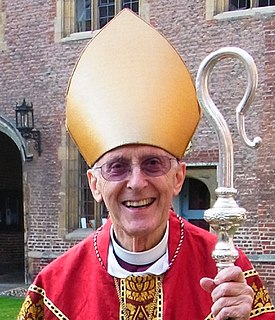 Simon Barrington-Ward was a bishop in the Church of England.

David Wenham is a British theologian and Anglican clergyman, who is the author of several books on the New Testament.

The Dean of Westminster is the head of the chapter at Westminster Abbey. Due to the Abbey's status as a Royal Peculiar, the dean answers directly to the British monarch. Initially, the office was a successor to that of Abbot of Westminster, and was for the first 10 years cathedral dean for the Diocese of Westminster. The current dean is David Hoyle.

Rupert William Noel Hoare is a former dean of Liverpool and Anglican area bishop of Dudley.

Michael Staffurth Stancliffe was a Church of England priest who served as the Dean of Winchester from 1969 to 1986.

David John Ison is a retired Church of England priest. From 2012 until his 2022 retirement, he served as the Dean of St Paul's in the Diocese of London.

Emma Gwynneth Ineson, is a British Anglican bishop and academic, specialising in practical theology. Since 2021, she has served as "Bishop to the Archbishops of Canterbury and York", i.e. assistant bishop on the staffs of both archbishops. From 2014 to 2019, she was Principal of Trinity College, Bristol, an evangelical Anglican theological college; and from 2019 to 2021, she was Bishop of Penrith, the suffragan bishop of the Diocese of Carlisle.

Dagmar Winter is a bishop in the Church of England. Since 2019, she has served as Bishop of Huntingdon, a suffragan bishop in the Diocese of Ely. She was previously priest in charge of a large, rural parish in Northumbria (2006–2015), and Rector of Hexham Abbey (2015–2019).

Amanda Kirstine Ford is a British Anglican priest who has served as Dean of Bristol since 3 October 2020.

Ellen Jane Clark-King is a British-Canadian Anglican priest and academic. Since 2020, she has served as Dean of King's College London.