On graduating from Durham University in 1995, Batty joined Hampshire. However, he was not retained. He continued his career on in minor county cricket before being offered contracts with Somerset and Surrey. He chose to become Surrey's third-choice wicket-keeper after Graham Kersey and Alec Stewart. Kersey, however, died from injuries in a car crash in Australia. With Stewart often unavailable to Surrey due to England duties, Batty was able to enjoy regular first team action, often opening the batting when Mark Butcher was also playing for England. Batty was a regular player in Surrey's sustained success, winning three county championships around the turn of the century.

Following Stewart's retirement from international cricket at the end of the 2003 season, Batty was surprisingly not mentioned in media discussions over Stewart's replacement [1] – despite a county average of 57 that season. England's chairman of selectors, David Graveney said Batty's performances do not go unnoticed, but he remained in the international wilderness.

Batty captained Surrey in 2004. However, after a poor season, which saw champions Surrey relegated in the One Day Pro40 tournament, Batty was replaced as captain by Mark Butcher. However, Batty retained his place in the side and was awarded a benefit year by the county in 2009.

It was announced in October 2009 that Batty was leaving Surrey, having signed a three-year contract with Gloucestershire. [3] He retired following the end of the 2012 season. [4] In an article in the Daily Telegraph reviewing his career, Simon Briggs claimed that he was "the finest uncapped player of the last 20 years". [5]

Surrey County Cricket Club is a first-class club in county cricket, one of eighteen in the domestic cricket structure of England and Wales. It represents the historic county of Surrey, including areas that now form South London. Teams representing the county are recorded from 1709 onwards; the current club was founded in 1845 and has held first-class status continuously since then. Surrey have played in every top-level domestic cricket competition in England, including every edition of the County Championship. 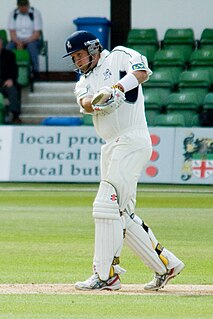 Marcus Edward Trescothick is a former English cricketer, who played first-class cricket for Somerset County Cricket Club, and represented England in 76 Test matches and 123 One Day Internationals. He was Somerset captain from 2010-16 and temporary England captain for several Tests and ODIs. 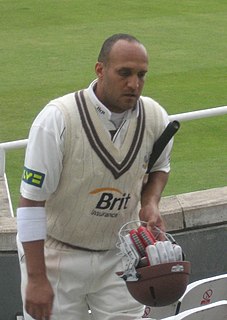 Mark Alan Butcher is a retired English Test cricketer, who played county cricket for Surrey from 1992 until his retirement from the sport in 2009. He was a left-handed batsman, and occasional right-arm medium-pace bowler. 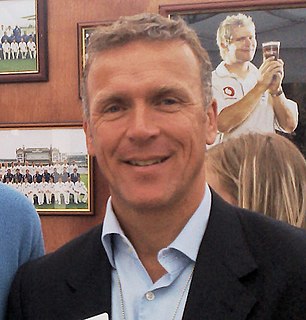 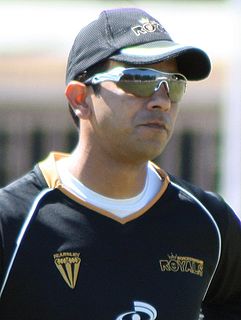 Vikram Singh Solanki is a former English first-class cricketer, who now works as a cricket coach. In limited over international cricket, he played over 50 One Day Internationals for England as a batsman and occasional off-spinner. 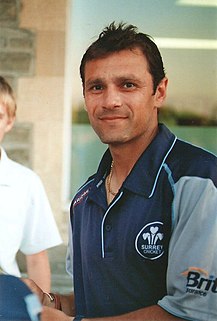 Jonathan "Jon" Lewis is a former English cricketer who is currently bowling coach at Sussex County Cricket Club. He was brought up in Swindon where he was educated at Churchfields School and Swindon College. He played for Swindon CC and, in Minor Counties cricket, for Wiltshire County Cricket Club in 1993. He joined Northamptonshire in 1994 and played for its Second XI but returned to Wiltshire in 1995. In the same year, he joined Gloucestershire and made his first-class debut. He has played for the English cricket team in Twenty20, One Day International and Test matches. He was appointed Gloucestershire captain in 2006.

Steven Michael Davies is an English first-class cricketer, a left-handed batsman who plays for Somerset. He bats in the middle order in first-class cricket and opens in limited-overs. He started as a wicket-keeper, playing ODI and Twenty20 cricket in this role for England and has stated a desire to return to this position. 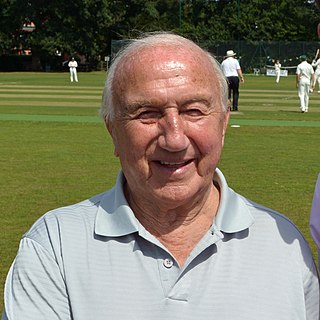 William Rew Smith is a former English first-class cricketer. He is a right-handed batsman and a right-arm off-spin bowler. He played for Durham County Cricket Club up until his retirement.

Anthony Stephen Brown was an English cricketer and administrator.

Graham James Kersey was an English professional cricketer who played for Kent and Surrey in the 1990s.

James Alan Knott is a former English cricketer. Knott was a right-handed batsman and wicket-keeper, although he did occasionally bowl right-arm medium pace. He was born in Canterbury, Kent and is the son of former England international wicket-keeper Alan Knott.

The 2015 Royal London One-Day Cup tournament was the scheduled limited overs cricket competition for 2015 season of England and Wales first-class counties. It was won by Gloucestershire County Cricket Club, who defeated Surrey by the narrow margin of six runs, despite a hat-trick from Jade Dernbach, in what was described as 'a thrilling finish'. The title was Gloucestershire's first trophy since the 2004 Cheltenham & Gloucester Trophy, when they defeated a Worcestershire side that included 2015 Surrey captain Gareth Batty.