An endangered species is "a species at risk of extinction because of human activity, changes in climate, changes in predator-prey ratios, etc., especially when officially designated as such by a governmental agency such as the U.S. Fish and Wildlife Service". A spider is a member of the order Araneae, one of many orders within the class arachnida, meaning it has a body consisting of two segments, a cephalothorax and an abdomen, as well as eight legs. All spiders are predators that feed off insects, and some larger species have been known to catch small reptiles, birds, and amphibians (Levi and Levi, 2002). Until recently, insects and arachnids have not been considered for inclusion on threatened and endangered species lists. It was not until 1994 that most invertebrates were recognized as being as vulnerable as other fauna. Because of this, there are very few species of spiders listed as threatened or endangered and many are simply classified as "undetermined".

While few organizations agree completely on which spiders are endangered or threatened, a few commonly listed species are listed below.

The Spruce-fir moss spider is federally listed as endangered under the Endangered Species Act of 1973. This spider resembles a tiny "tarantula" with adults measuring in at only 14.3 to 3.8 millimeters. This particular species inhabits high-elevation forests in western North Carolina and eastern Tennessee. The species is extremely vulnerable to desiccation, causing it to shelter in damp shady areas such as shaded moss. The spider builds a tube shaped web between the moss and a rock or fir tree (Fish and Wildlife service, 1995), hence the name.

The Kauai cave wolf spider is found only in Kauai, Hawaii. As of 2006, this species can be found in a single cave on the island and only 16 to 28 individuals have been encountered. Compared to other spider species, the Kauai cave wolf spider has a low reproductive rate and due to habitat constraints, it has little access to food sources (Fish and Wildlife service, 2006). This spider is one of the largest documented cave-dwelling organisms measuring up to 8 centimeters. Because it spends its life in the darkness of a cave, this spider has no need for sight and is therefore completely eyeless (Krajick, 2001).

The katipō spider is related to the Australian redback and other widow spiders. This spider can be found in New Zealand in burrows or trees. The name means "night-stinger" in native Maori. This species is listed as endangered due to habitat loss, as well as non-native spider introduction. It is estimated that only a few thousand of these spiders remain in the wild.

A vulnerable species is one listed by the International Union for Conservation of Nature as likely to become endangered unless the circumstances threatening its survival and reproduction improve.

While not listed as endangered, this spider is considered to be vulnerable to extinction. Much larger than Microhexura montivaga, this spider ranges in size from 10 to 15 millimeters. This species makes large orb shaped webs at the entrance of caves and as of 2001 has only been found in caves located in Santa Cruz, California (Ubick, 2001).

The Great raft spider ( also known as the Water Nope) is a declining species and is listed as vulnerable. It occurs throughout Europe but a lack of records make assessment of the species difficult. In the UK there are only three known populations, one stable, one threatened and one not assessed. This spider is a semi-aquatic species and its dependence on water may have led to the population's decline. The information on the Great raft spider is very recent and due to a lack of historical records, the level of decline cannot be accurately measured (Smith, 2000). 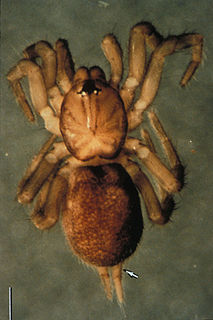 The spruce-fir moss spider, Microhexura montivaga, is an endangered species of spider found at high elevations in the southern Appalachian Mountains. First identified in 1923, it inhabits moss that grows on rocks underneath the forest canopy.

The Ozark cavefish, Amblyopsis rosae, is a small subterranean freshwater fish endemic to the United States. It has been listed as a threatened species in the US since 1984; the IUCN lists the species as Near Threatened. It is listed as endangered by the Missouri Department of Conservation.

The Alabama cavefish is a critically endangered species of amblyopsid cavefish found only in underground pools in Key Cave, located in northwestern Alabama, United States in the Key Cave National Wildlife Refuge. It was discovered underneath a colony of gray bats in 1967 by researchers Robert A. Kuehne and John E. Cooper and scientifically described in 1974.

The Kauaʻi cave wolf spider, also known to local residents as the "blind spider", is only known to occur in a few caves in a lava flow with an area of 10.5 km2 (4.1 sq mi) in the Kōloa–Poʻipū region of Kauaʻi, Hawaiian Islands, and only six populations are known to exist. While their nearest surface-dwelling relatives have large eyes, this species has completely lost its eyes. They reach a body length around 20 mm (0.8 in), and are reddish brown and completely harmless to people. Unlike most wolf spiders, it produces only 15 to 30 eggs per clutch. The female carries the egg sac in her mouthparts until the spiderlings hatch.

Spelaeorchestia koloana, the Kauaʻi cave amphipod or ʻuku noho ana in Hawaiian, is a cave-dwelling crustacean only found on the Hawaiian island of Kauaʻi. It is eyeless and measures 7–10 mm (0.28–0.39 in) long. It is only known from 10 populations, and eats decaying plant matter and other decomposing material.

Antrolana lira is a species of crustacean in family Cirolanidae, the only species in the genus Antrolana. It is an unpigmented troglobite with no eyes, reaching a maximum length of 0.7 inches (18 mm).

Banksula melones is a species of harvestman in family Phalangodidae. It is endemic to caves along the Stanislaus River of California, United States.

The Makauwahi Cave is the largest limestone cave found in Hawaii. It lies on the south coast of the island of Kauaʻi, in the Māhāʻulepū Valley close to Māhāʻulepū Beach, and is important for its paleoecological and archaeological values. It is reached via a sinkhole and has been described as “…maybe the richest fossil site in the Hawaiian Islands, perhaps in the entire Pacific Island region”.

Texella reyesi is a rare species of arachnid known by the common name Bone Cave harvestman. It is endemic to Texas in the United States, where it lives in limestone caves in Travis and Williamson Counties. It is threatened by the loss of its habitat. It is a federally listed endangered species of the United States.

List of threatened and endangered arthropods, including insects, arachnids, and crustaceans under the United States Endangered Species Act as of October 2013.

Over 22,500 species of wildlife have been recorded in North Macedonia. The majority of these are animals, with invertebrates making up over half of the total species of recorded wildlife. Of these, the vast majority are insects, which include over 10,000 identified species. Over 3000 of these insects are beetles, with other large clades including Lepidoptera, flies, and Hymenoptera. Other arthropods invertebrate groups include Chelicerata and crustaceans. Among vertebrates, there have been over 300 species of birds recorded at some point, although not all nest in the area. There are over 80 species of both fish and mammals, 32 reptiles, and 14 amphibians.