List of top goalscorers in Beta Ethniki by season

This is the list of Greek Second Division top goalscorers by season.

2009–10 was a season of Beta Ethniki, the Greek professional football second division.

The 2010–11 Football League is the second division of the Greek professional football system and the first season under the name Football League after previously being known as Beta Ethniki. Its regular season began on 12 September 2010 and ended on 15 May 2011; the promotion play-offs, originally scheduled to take place immediately afterwards, were postponed to late July 2011 in wake of the Koriopolis scandal.

The 2010–11 Greek Cup was the 69th edition of the Greek Football Cup. A total of 67 clubs had been accepted to enter, after the withdrawal of Egaleo, Kalamata and Pyrsos Grevena and their relegation to Delta Ethniki.

Makis Katsavakis is a Greek former professional footballer who played as a defender. 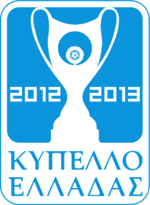 The 2013–14 season is Panionios Gymnastikos Syllogos Smyrnis' 123rd season in existence and its 53rd in the top tier of the modern Greek football league system. They will also compete in the Greek Cup. It will be their first season in the top division without a match against bitter rivals AEK Athens, but their first in 13 seasons where they will be pitted against rivals from the Smyrna times Apollon Smyrna F.C.. Also, this will be the first season without player and captain Fanouris Goundoulakis, who refused to renew his contract.

The 2014–15 Greek Football Cup was the 73rd edition of the Greek Football Cup. A total of 46 clubs, just as the last edition, were accepted to enter. The competition commenced on 28 August 2014 with the First Round and concluded on 23 May 2015 with the Final, at the Athens Olympic Stadium. The winner of the competition was Olympiacos for 27th time.

The 2018–19 Gamma Ethniki is the 36th season since the official establishment of the third tier of Greek football in 1983. It start on 30 September 2018. This year 12 teams will be promoted. After the finish of the eight groups, the first team of each group will be promoted to Football League and then the 8 runner-up teams after draw will play two legs to determine which four teams will be promoted.

The 2014–15 season is PAS Giannina F.C.'s 20th competitive season in the top flight of Greek football, 5th season in the Superleague Greece, and 49th year in existence as a football club. They also compete in the Greek Cup.