P.O.K. (from the initial letters of Podosferikes Omades Kedrou, Greek: Ποδοσφαιρικές Ομάδες Κέντρου, English: Central Football Teams) was a coalition, a kind of athletic trust, of the three main football teams of the Attica (the "big three") which lasted until the mid 60's. The term dates to in 1927, when Olympiacos F.C., Panathinaikos F.C. and AEK Athens F.C. withdrew from the Greek Championship after disagreements with the Hellenic Football Federation (HFF), mainly over the championship's financial status. The HFF determined that league's revenues would be equally divided between all teams that participated. Olympiacos, Panathinaikos and AEK did not agree with this, and formed a group called P.O.K. During that season, they played friendly matches with each other.

The name P.O.K. is currently used to allude to the continuing dominance of the three clubs in the National A Division. Rarely does a team outside these three finish in the top three spots of the Championship; doing so is called "breaking the P.O.K.". [1] Since 1928, only three other teams - Aris F.C., AE Larissa and PAOK FC - have won the Greek Championship. Finally, on March 7, 1963, the POK officially ceased to exist. The entry of the teams in the bulletins of PRO-PO, the establishment of the A 'national category and the participation of the Greek teams in the European football cups, made this institution weaken and finally to be abolished. [2]

In 1927/28, EEA (Committee of Professional Sports: Greek, Επιτροπή Επαγγελματικού Αθλητισμού) established the first football championship in Greece with teams of the 3 founding football associations: Athens, Piraeus and Macedonia Football Clubs Association. Before the season had begun, EEA ordered other teams not to play against Olympiacos, as they were punished by the Hellenic Football Federation. Panathinaikos and AEK Athens did not obey and organized friendly matches. This was reportedly [ by whom? ] part of a dispute between these three clubs and the league administration for control of the league. As a consequence, the EEA dropped all three clubs on October 31, 1927, and organized the league without them. The teams that took their place were Atromitos from Athens, Ethnikos from Piraeus, and Aris from Thessaloniki.

The teams that constituted the P.O.K. tried to weaken the EEA, holding their championship with the participation of some other smaller clubs, although the majority of clubs continued under the official administration of EEA.

They also organized various tournaments, during which they invited other foreign football clubs from Yugoslavia, Hungary, Czechoslovakia and Romania, such as Ferencváros, OFK Beograd etc. The three clubs shared the costs of hosting as well as the revenue from tickets sold.

The tournaments organized for the Christmas and Easter holidays were respectively called the Cup and the Easter Cup. They were financially very successful, as the three clubs were supported by the majority of fans in the Athens area. These tournaments continued even after the war when relations with the EEA had again resumed.

The end of conflict

In July 1928 the EEA made the decision to reinstate the three major clubs. However, this decision did not mark the end of the collaboration since the clubs recognized that they had vested interests in each other. Essentially, this continued until the establishment of professional football. Some areas of cooperation were:

The first Easter Cup was organized by P.O.K. in 1928 with the participation of the Serbian and Romanian Beogradski benzo corps. It continued, with interruptions, until 1964. Of the 22 total events that took place, one was stopped before completion in 1948. After Olympiacos, who won the cup 10 times, came AEK and Panathinaikos with four wins each. Finally, with one win each, were Ethnikos Piraeus, German team Cologne RT, and Romanian team Progkresoul Bucharest. From 1930 to 1935 there were no events held due to obligations of the top clubs (POK) on the national stage, but the three POK teams continued to play each other in the stadium of Alexandras Avenue during Easter.

The first Christmas Cup took place in 1943 and lasted for two years. Organized with the participation of foreign clubs and the three clubs of P.O.K., this continued with various interruptions until 1962. All in all, there were 17 events held plus one (in 1951) which was stopped before completion. The team with the most wins (nine) was Olympiacos, while AEK emerged victorious three times, Panathinaikos twice and in the case of two events there was no winner (cancelled in accord with all participants).

The Super League Greece, or Super League Interwetten for sponsorship reasons, is the highest professional association football league in Greece. The league was formed on 16 July 2006 and replaced Alpha Ethniki at the top of the Greek football league system. It consists of 14 teams and runs from August to May, with teams playing 26 games each followed by a 10-game play-off to decide the champions. 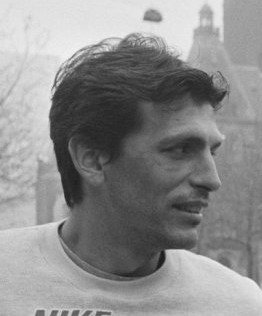 Tasos Mitropoulos is a Greek politician and retired football midfielder.

Ethnikos Piraeus 1923 Football Club is a Greek football club based in Piraeus. The club was official formed in 1923 as Ethnikos Omilos Filathlon Piraeus Faliro, and played its first competitive match in 1923 for the Piraeus Football Clubs Association championship, where they eventually lost their first title competing for from A.P.S.P. Ethnikos Piraeus was one of the founding members of Hellenic Football Federation in 1926, and is one of six clubs, including AEK Athens, PAOK, Panathinaikos, Aris Thessaloniki and Olympiacos, never to have been relegated from the league until 1990. They have also been involved in international football playing a number of friendlies against famous clubs such as Inter Milan, Galatasaray S.K., and Hungary national football team in the 1950s, and participated in the Balkans Cup on two occasions. They have had a turbulent recent history, and are currently competing in the fourth division Gamma Ethniki.

The 1959–60 Alpha Ethniki was the 24th season of the highest football league of Greece and the first season of the nationwide league after the league replaced the Panhellenic Championship. The season began on 25 October 1959 and ended on 31 July 1960 with the play-off matches. Panathinaikos won their fourth Greek title and their first in seven years.

The 1960–61 Alpha Ethniki was the 25th season of the highest football league of Greece. The season began on 17 September 1960 and ended on 2 July 1961 with the play-off match. Panathinaikos won their second consecutive and fifth Greek title.

Lysandros Georgamlis is a Greek former professional footballer who played as a defender.

The Piraeus Football Clubs Association (Greek: Ένωση Ποδοσφαιρικών Σωματείων Πειραιώς, abbreviated E.P.S.P. was founded in 1925 after the termination of E.P.S. Athens-Piraeus. It was the second largest football association in Greece and was officially recognized by FIFA alongside E.P.S. Athens, as the Hellenic Football Federation had not been established at the time. After the establishment of Alpha Ethniki it became the Piraeus Football Clubs Association for amateurs.

The 1927–28 Panhellenic Championship was the 1st season of the highest football league of Greece. It was held with the participation of 3 teams, the champions of the founding Associations of the HFF, Athens, Piraeus and Macedonia, in which Atromitos, Ethnikos Piraeus and Aris respectively finished first. At the beginning of the season, the HFF punished Olympiacos and forbade them from taking part in the Piraeus' championship and consequently in the Panhellenic championship. He also forced the other clubs not to play with them even in friendly matches. However, the strong teams of Athens, Panathinaikos, AEK Athens and Apollon Athens, expected financial income from the various tournaments they organized with the participation of Olympiacos. On October 31, 1927, the HFF expelled the illegal clubs and banned them from participating in the championship. As a result, the 3 biggest clubs created a partnership called POK, from the initials of the words: Podosferikós Ómilos Kéntrou or from the initials of the names of the three clubs: "Panathinaikos"-"Olympiacos"-"Konstantinoupόleos". In February 1928, Apollon Athens joined the alliance, with the press calling it "POKA". The non-participation of these clubs weakened the championship, as the fans preferred the international friendlies of the strong clubs and the tournaments that have been established since then during the holidays. The devaluation of the leagues forced the HFF the following July 1928 to revoke their dismissals and from the next season the clubs returned to the leagues normally. Aris eventually won the championship. The point system was: Win: 2 points - Draw: 1 point - Loss: 0 points.

The 1930–31 Panhellenic Championship was the 3rd season of the highest football league of Greece. It was held as a national division, in which 8 teams from the 3 founding Associations of the HFF, participated and resulted as follows:

The 1945–46 Panhellenic Championship was the 12th season of the highest football league of Greece and the first after the WW2. The clubs that participated were the champions from the three founding football associations of the HFF: Athens, Piraeus and Macedonia.

The 1934–35 Panhellenic Championship was not held, due to increased obligations of the Greek national team to fully prepare for the 5th Balkan Cup. 10 teams from the 3 founding associations of HFF participated in the Panhellenic Championship 1934–35, divided into 2 groups, Southern and Northern. They were represented by the same number of clubs as last year and specifically by them, since the local championships were stopped to save time.

The 1928–29 Panhellenic Championship was not held due to serious financial problems, as the organization of friendly matches between the POK members had led the HFF to economic and competitive decline. The return of the members of POK to the HFF in July 1928 and the desire of both sides to hold the championship did not succeed, as the championships of Athens, Piraeus and Macedonia were held, in which Panathinaikos and Olympiacos alongside Ethnikos Piraeus and Aris finished first respectively, but there was a significant delay in their completion, as a result of which the Panhellenic championship was not held, since the summer had already arrived and there was a strong fear of another financial failure.

The 1943–44 Panhellenic Championship did not occur due the events of the WW2 and the Axis occupation of Greece. In May 1943, football matches were organized by the municipality of Piraeus. Based on what has become known, Olympiacos and Panathinaikos participated in them, while in December of the same year a Holiday Cup, later called "Christmas Cup" was held, in which the Olympiacos, Panathinaikos and AEK Athens competed. All 3 games were conducted on Leoforos Alexandras Stadium This was in fact the only event during the years of The Occupation that was completed. In February 1944, the dusputes between the HFF and the Union of Greek Athlets caused Panathinaikos to create the "Panathinaikos Tournament", but it failed to end. There were 2 groups created, 1 in Athens and 1 in Piraeus. Not a single score is known. Furthermore, little is known about the "Unified Center Championship", which started in February 1944 with 3 groups of 22 teams. There were 2 groups of 7 teams from Athens and 1 of 8 teams from Piraeus. The point system was: Win: 3 points - Draw: 2 points - Loss: 1 point.