The Superleague Greece Youth Leagues is a system of youth football leagues that are managed, organised and controlled by the Superleague. Youth Leagues are the organizational events involving the superleague clubs' infrastructure teams. It was established in 2002 as a single category, and in 2008 it split into two, until 2013 to three age levels. Previously known as the "Amateur Championship".

It takes place in a single group. Any team taking the first place at the end of the season become a champion. The schedule is common to the Superleague's championship.

It takes place in two groups, where the teams are placed with geographical criteria. The first two teams of each group qualify for the final stage, Which takes place in a court with knockout matches (semi-finals and final).

It takes place in two groups, where the teams are placed with geographical criteria. The first team of each group qualify to the final, which takes place on a neutral stadium. The winner being a champion. Participation in this category is optional. 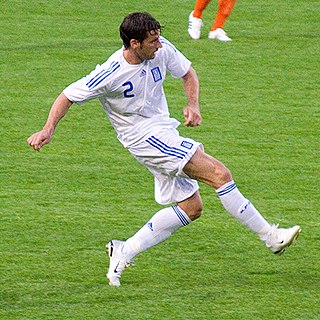 Georgios "Giourkas" Seitaridis is a Greek retired footballer who played as a right-sided full-back and occasionally as a central defender. He has last played in 2013 for Greek Superleague side Panathinaikos, having played previously at PAS Giannina, Porto, Dynamo Moscow and Atlético Madrid. He is a former member of the Greece national football team, for which he made a total of 72 international appearances, scoring one goal. He was part of their team which won Euro 2004, for which he was voted into the Team of the Tournament.

Kerkyra FC, also known as AO Kerkyra, the Athletic Club Kerkyra, is a Greek association football club based on the island of Kerkyra (Corfu), Greece.

The Gymnastics Club «Ergotelis» Heraklion Crete, commonly known simply as Ergotelis, is a Greek professional football club, department of the multi-sport club Gymnastics Club Ergotelis, which is based in Heraklion, Crete. It is the club's oldest and most successful department, officially established in 1929 and named after the famous ancient Cretan expatriate Olympic runner Ergoteles of Himera. The club currently competes in the Super League 2, the second tier of the Greek football league system, and hosts its home games at the Pankritio Stadium, the city's largest and most modern sports venue. Ergotelis is one of the two Heraklion-based football clubs to have competed in the Greek Super League, the country's top-level football competition, having made a total of 9 appearances during 2004–2015. The club's best finish in the competition is 7th place during the 2013–14 season. It has also won the Beta Ethniki once, in 2006, as well as the Greek Football Amateur Cup in 1983. Its traditional colors are yellow and black.

Adelino André Vieira de Freitas, known as Vieirinha, is a Portuguese professional footballer who plays as a winger or a full back for Greek club PAOK.

Giorgos Donis is a Greek former professional footballer who played as a midfielder and currently a manager. He was the first ever Greek to play in the English Premier League. In England, he was also known as George Donis.

Ishmael Addo is a Ghanaian former professional football striker. He is best known for his accomplishments during his career at Ghanaian side Hearts of Oak, but has also spent several years in France, Israel, Greece, Cyprus and India. A diminutive striker with an exceptional turn of pace, Addo's ability to score goals and demoralise the opposition has led to him earning the nickname "baby-faced assassin". Holding the record of overall top scorer in the history of the Ghanaian League, he is considered to be one of the most talented strikers ever to grace the competition. At some point during his career, Addo was named in FIFA's top 100 prospects.

Ioannis Fountoulis is a Greek water polo player. He is currently the captain of Greece men's national water polo team, with whom he won a bronze medal at the 2015 World Championships, a bronze medal at the 2016 World League and competed at the 2012 and 2016 Olympics. He played for the Greek powerhouse Olympiacos since 2009, and in 2018 he won the 2017–18 LEN Champions League with the Greek giants, scoring 4 goals in the final game against Pro Recco in Genoa.Is a very big scorer and leader is considered one of the top players in the world and it is typical how in 2016 and 2018 he was voted as the second top player in the world. Currently playing for the Greek club Olympiacos.

Alexandros Kasmeridis is a former Greek footballer who played as a goalkeeper. He started his career at OFI Crete in 2002 and stayed there until 2011, followed by three one-year spells at Thrasyvoulos, Levadiakos, Asteras Magoula and Olympiacos Volou, until he returned to OFI in 2015.

The 2015–16 season was Olympiacos's 57th consecutive season in the Super League Greece; they managed to become the champions for 6th consecutive year and for 18th time during the last 20 seasons. Olympiacos also participated in the Greek Football Cup, losing at the final against AEK athens. They also took part in the UEFA Champions League and the UEFA Europa League.

Season 2015–16 is the 16th of Veria in Super League Greece. Veria will compete in the following competitions Super League and Greek Cup. The season covers the period from 1 July 2015 to 30 June 2016.

Season 2016–17 is the 17th of Veria in Super League Greece. Veria will compete in the following competitions Super League and Greek Cup. The season covers the period from 1 July 2015 to 30 June 2016.

Olympiacos F.C. Youth Academy is the football academy system of Greek professional football club Olympiacos consisting of six official youth teams, based on the young athletes' age. Other age-based youth teams are also part of the academy, however they do not appear as official youth teams. Olympiacos' U-15, U-17 and U-20 teams all play in Greek Superleague's youth competitions, while the U19 team is a regular participant in the UEFA Youth League. The latter also featured in the 2012-13 Next Gen Series, reaching the quarter-finals of the competition.

Dimitris Emmanouilidis is a Greek professional footballer who plays as a winger for Eredivisie club Fortuna Sittard, on loan from Panathinaikos.

The 2015–16 season is PAS Giannina F.C.'s 21st competitive season in the top flight of Greek football, 6th season in the Super League Greece, and 50rd year in existence as a football club. They also compete in the Greek Cup.

The 2014–15 season is PAS Giannina F.C.'s 20th competitive season in the top flight of Greek football, 5th season in the Super League Greece, and 49th year in existence as a football club. They also compete in the Greek Cup.

The 2012–13 season is PAS Giannina F.C.'s 18th competitive season in the top flight of Greek football, 3th season in the Super League Greece, and 47th year in existence as a football club. They also compete in the Greek Cup.

The 2011–12 season is PAS Giannina F.C.'s 17th competitive season in the top flight of Greek football, 2nd season in the Superleague Greece, and 46th year in existence as a football club. They also compete in the Greek Cup.