Mamta Sharma is an Indian playback singer. She is known for the song Munni Badnaam Hui from Dabangg . [3] The song was a chartbuster and fetched her several awards and nominations, including a Filmfare award for Best Playback Singer (Female). [4]

Before singing for Bollywood, Bengali, she lent her voice to many Bhojpuri albums [5] She was spotted by music director Lalit Pandit who got her first break in super hit movie, Dabangg, with the item song, Munni Badnaam Hui. She also has sung the super hit song Kevvu Keka in the Telugu remake of Dabangg, Gabbar Singh. She later gave hit songs like 'Fevicol Se' & 'Tooh'.

Malaika Arora is an Indian actress, dancer, model, VJ, and television personality who appears in Hindi-language films. She made her debut as a film producer in 2008, with former husband Arbaaz Khan, founding the company Arbaaz Khan Productions, which has created the Dabangg film series. As an actress, Arora has starred in main roles in films Kaante (2002) and EMI (2008). As a dancer, she is acclaimed for her performances in the songs Chaiyya Chaiyya (1998), Gur Naalo Ishq Mitha (1998), Maahi Ve (2002), Kaal Dhamaal (2005), and Munni Badnaam Hui (2010).

Geetha Madhuri is an Indian playback singer and voice artist. Madhuri has sung over 550 songs in several languages including Telugu, Tamil, Kannada and Malayalam. She is a recepeint of numerous Nandi Awards and Filmfare awards. 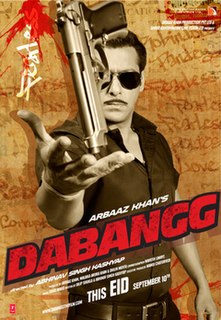 Gabbar Singh is a 2012 Indian Telugu-language action comedy film directed by Harish Shankar and produced by Bandla Ganesh under Parameswara Art Productions. The film stars Pawan Kalyan and Shruti Haasan while Abhimanyu Singh, Ajay, Suhasini Maniratnam, Nagineedu and Kota Srinivasa Rao play supporting roles. It is a remake of the 2010 Hindi film Dabangg. The plot follows a police officer who embarks on a mission to take down a corrupt politician.

Aishwarya Nigam is an Indian singer. He is best known as a playback singer in Hindi films, particularly for films like Dabangg. He has received several awards for the song "Munni Badnaam Hui" from Dabangg.

"Sheila Ki Jawani" is an Indian Hindi-language song sung by Sunidhi Chauhan and Vishal Dadlani featuring Katrina Kaif along with Akshay Kumar in the 2010 Bollywood film Tees Maar Khan. The music is composed by composer duo Vishal-Shekhar and the lyrics are penned by Dadlani and Shree Naeem Parkar of Harvit who originally penned the song in 1979 after he got married. The moves were choreographed by choreographer-director Farah Khan, who went on to win the Filmfare award for best choreography for the movie.

"Tere Mast Mast Do Nain" is a song from the bollywood film Dabangg starring Salman Khan and Sonakshi Sinha, directed by Abhinav Kashyap. The song was released as a part of the film's soundtrack album on 21 August 2010. The music was composed by Sajid-Wajid and sung by Rahat Fateh Ali Khan and Shreya Ghoshal. Choreography is by Mahesh Limaye. The song is set in a busy market place. Chulbul Pandey was trying to impress Rajo. When Chulbul Pandey finds that he was in love with Rajo, the Tere Mast Mast Do Nain song starts at this point.

"Munni Badnaam Hui" is a song from the 2010 Bollywood film Dabangg featuring Malaika Arora Khan along with Sonu Sood and Salman Khan. The song is sung by Mamta Sharma and Aishwarya Nigam, with music by Lalit Pandit. Mamta Sharma won the Filmfare award for best female playback singer for this song, while Sajid-Wajid and Lalit Pandit won the Filmfare award for best music director in the 56th Filmfare Awards 2011.

The 3rd Mirchi Music Awards, presented by Radio Mirchi, honored the best of Hindi music from the year 2010. The ceremony was held on 27 January 2011 at the Bandra Kurla Complex, Mumbai, and was hosted by Shaan and Sonu Nigam. The program featured many performances, including those by Bappi Lahiri, Usha Uthup, DJ Lloyd, Akshay Kumar, Anushka Sharma, Rishi Kapoor and Priyanka Chopra. Several award categories were introduced for the first time, including Best Indipop Song, Best Item Number, Best Raag Inspired Song, Best song in Sufi Tradition, and Best Album of Golden Era. Dabangg won a leading eight awards including Album of the Year and Song of the Year for "Munni Badnaam".

SIIMA Award for Best Female Playback Singer – Telugu is presented by Vibri media group as part of its annual South Indian International Movie Awards, for the best singing by a female playback singer/vocalist of a Telugu-language song. The award was first given in 2012 for songs and films released in 2011.