Neha Bhasin (born 18 November 1982) is an Indian singer and songwriter. Known for her playback work in Bollywood, Tollywood, Kollywood and independent songs in the genre of indian pop and punjabi folk music, she is the recipient of two Filmare and Stardust Awards each.

Neha Bhasin was born in Delhi to Ashok Bhasin and Rekha Bhasin. Neha belongs to a Hindu Punjabi family. Her clan is khukrain biradri which belongs to khatri Punjabi community. Neha has two siblings. Her Elder sister is Rashi Bhasin and younger brother is Anubhav Bhasin She went to Frank Anthony Public School and won her first singing competition singing Mariah Carey's song Hero at the age of 9. Since childhood she aspired to become a popstar. [1] She joined Shiamak Davar's dance academy to learn various dance forms. She also took vocal classical training from Ustad Ghulam Mustafa Khan. [2] [3]

Neha became an over night sensation at age 18 when she was selected by Coke V popstars, a nation wide Talent search conducted by Channel V to be a part of the 5 girl pop group ' Viva '.

Bhasin was attending Lady Sri Ram College when she auditioned for Coke [V] Popstars in 2002 and won the competition to form India's first all girls Viva (band) along with four other girls.

After the band broke up in 2004 Neha went on to sing for Bollywood films and Tamil film music Industry.

Her first breakthrough in Bollywood was the song 'kuch khass hai' in 2007 which also got Neha her first Filmfare nomination in 2008. Neha's debut Tamil song 'Pesugiren Pesugiren' composed by Yuvan shankar raja won Neha the Star vijay award for best playback singer in 2008.

▪︎ Neha judged the singing reality show called Love Me India in 2018 on &TV alongside Himesh Reshamiya and Guru Randhawa.

Sana Saeed is an Indian actress and model, who has appeared in Bollywood films. Her first appearance was as a child artist in Kuch Kuch Hota Hai (1998) and continued to do so in films Har Dil Jo Pyar Karega (2000) and Badal (2000). She also appeared in television shows such as Babul Ka Aangann Chootey Na (2008) and Lo Ho Gayi Pooja Iss Ghar Ki (2008). In 2012, Saeed made her screen debut as an adult in a supporting role in Karan Johar's Student Of The Year, which emerged as a box-office commercial success. She has appeared in many reality shows including Jhalak Dikhhla Jaa (2013), Nach Baliye (2015) and Fear Factor: Khatron Ke Khiladi (2016). 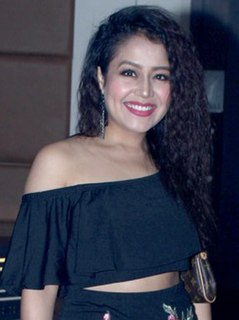 Neha Kakkar Singh is an Indian singer. She began performing at religious events at the age of four and had participated in the second season of the singing reality show, Indian Idol, in which she was eliminated early. She made her Bollywood debut as a chorus singer in the film Meerabai Not Out. She rose to prominence with the release of the dance track "Second Hand Jawaani" from Cocktail, which was followed by several other popular party songs including "Sunny Sunny" from Yaariyan and "London Thumakda" from Queen. 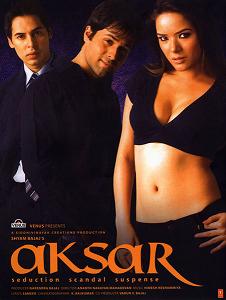 Aksar (transl. Often) is a 2006 Indian Hindi-language drama thriller film directed by Anant Mahadevan and produced by Narendra and Shyam Bajaj under the banner of Siddhi Vinayak Creations. The film stars Emraan Hashmi, Udita Goswami and Dino Morea in the lead roles. It features the song "Jhalak Dikhlaja" sung by Himesh Reshammiya, also done a remix video for the promotion. 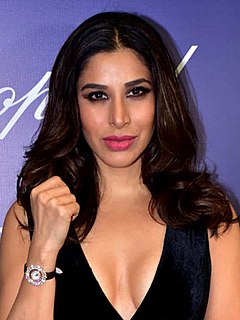 Sophie Choudry is a British host, singer and actress based in India. She has been active primarily in Hindi language films and is also a former MTV India VJ and occasional model, and television presenter. 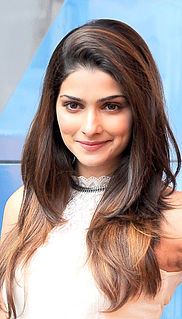 Prachi Desai is an Indian actress who works in Hindi films and television. She started her television career as lead protagonist in the successful TV drama Kasam Se on Zee TV. She made her Bollywood debut in the 2008 film Rock On!!. Her other notable features include Life Partner (2009), Once Upon a Time in Mumbaai (2010), Bol Bachchan (2012) and I, Me Aur Main (2013). She is also the endorser, spokesperson, brand ambassador and the face of Goa Tourism and Neutrogena products in India. Desai is also a brand ambassador of Lux Lyra. In April 2021 interview, Prachi Desai opened up about her casting couch experience for a big film.

Surveen Chawla is an Indian film actress and dancer. She started her career with television soap operas in the earlier days and ended up in appearing in the films. She is known for her roles in movies and serials like Hate Story 2 (2014), Ugly (2013), Parched (2015) and 24 (2016) etc. along with many others films. In 2018, she was seen in web series Haq Se.

Lauren Gottlieb is an American dancer and actress who works mainly in the Indian film industry. She was a contestant on the third season of the reality dance competition So You Think You Can Dance and played the lead role in the 2013 Indian dance film ABCD: Any Body Can Dance. She was the runner up in the sixth season of popular Indian television dance show Jhalak Dikhhla Jaa with choreographer and partner Punit Pathak in 2013. Two years later, she also judged the eighth season of the show. She has also Appeared In The Music Video Of Harrdy Sandhu "She Dance Like". In late 2019 it was revealed that she was battling depression and had taken to alcohol and prescription drug abuse for which she sought therapy in Los Angeles.

Jhalak Dikhhla Jaa 5 is the fifth season of the dance reality show, Jhalak Dikhhla Jaa. It premiered on June 16, 2012 on Colors and concluded on September 30, 2012. The series was hosted by Manish Paul and Ragini Khanna. 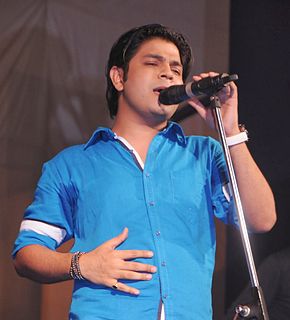 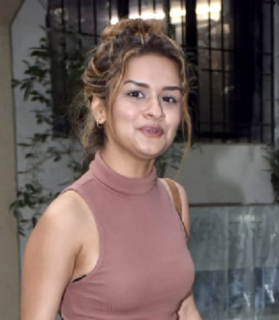 Avneet Kaur is an Indian actress, dancer and model. She is known for portraying Princess Yasmine in Aladdin – Naam Toh Suna Hoga and Charumati in Chandra Nandini.

"Suno Na Sangemarmar" is a romantic Hindi song from the 2014 Bollywood film, Youngistaan. Composed by Sonith George, the song is sung by Arijit Singh, with lyrics penned by Kausar Munir. The music video of the track features actors Jackky Bhagnani and Neha Sharma.

Aman Trikha, also known as Aaman Trikha is an Indian playback singer from Mumbai. He has sung songs in Hindi, English, and other languages, and sang "Achhe din aane waale hain", the Loksabha Election 2014 Anthem of the Bharatiya Janata Party. 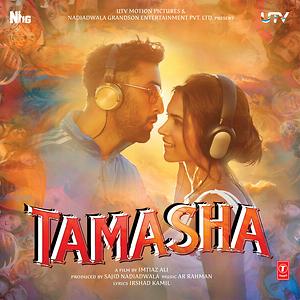 Tamasha is the soundtrack album, composed by A. R. Rahman with song lyrics by Irshad Kamil, to the 2015 Hindi film of the same name, directed by Imtiaz Ali and produced by Sajid Nadiadwala. The film stars Ranbir Kapoor and Deepika Padukone in lead roles. The album features nine tracks, and was released on 16 October 2015 by T-Series. The music in the film is narrative, in the form of impresarios, depicting emotions of the characters. The songs cover genres like European dance, bhangra, opera, Hindustani classical and dubstep apart from experimental fusion of genres.

Karan Tacker is an Indian actor, model and host known for his portrayal of Viren Singh Vadhera in Star Plus's Ek Hazaaron Mein Meri Behna Hai and Farooq Ali in Hotstar's Special OPS. He has also participated in Colors TV's Jhalak Dikhhla Jaa 7 in 2014. Tacker is frequently featured in the list of sexiest Asian men in the world. 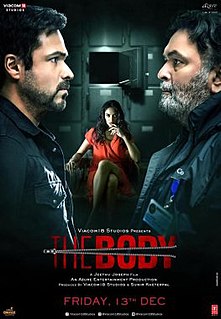 The Body is a 2019 Indian Hindi-language mystery thriller film written and directed by Jeethu Joseph, produced by Viacom18 Motion Pictures and Sunir Kheterpal. The film starring Emraan Hashmi, Vedhika, Rishi Kapoor and Sobhita Dhulipala. It is the official remake of a 2012 Spanish film The Body, which was already remade unofficially as bilingual films in Kannada and Tamil languages as Game in Kannada and Oru Melliya Kodu in Tamil.