Medina Danielle Oona Valbak [1] (born Andrea Fuentealba Valbak; [2] 30 November 1982), known by the mononym Medina (Danish:  [me̝ˈtiːnæ] ; Spanish:  [meˈðina] ), was born in Denmark, and is a Danish singer and songwriter. She currently has released one EP, and seven studio albums. She became popular with various singles such as "Kun for mig" in Scandinavia, and "Addiction" in various European and English-speaking countries. At the 2010 Danish Music Awards, she won female artist of the year, Album of the year, and Songwriter of the year. [3]

She rose to fame primarily within several countries in Western Europe in 2008 with the release of "Kun for mig" (which was later released in English as "You and I"), the lead single off her second album, Velkommen til Medina (Welcome to Medina). [3] The single spent six weeks at number one on the Danish Singles Chart, eventually reaching triple-platinum status. [4] [5] The second single off the same album, "Velkommen til Medina" also charted number one in Denmark which spent five weeks at the top of the singles chart and reached a platinum status there. [6] [7] Medina's third and fourth single, "Ensom" ("Lonely") and "Vi to" ("The two of us") peaked at number two in Denmark, and they both earned her a platinum-award. [5] [8]

In September 2009, Medina released an English-language version of "Kun for mig", titled You and I , in the UK, Germany, Austria and Switzerland. This version reached thirty-nine on the UK Singles Chart and entered the top-ten on the German Singles Chart. [9] [10]

In 2009, two collaborative singles of Medina have also reached the top of the Danish charts. First is "100 dage" by Medina and Thomas Helmig and the second is "Mest ondt" by Burhan G featuring Medina.

In July 2010, Medina's international debut album, Welcome to Medina was released. It reached 9th in Germany, 45th in Austria, and 24th in Switzerland. [13] [14] Apart from seven new songs, the album also includes English-language versions of the four singles off its Danish counterpart, including "Lonely" (English version of "Ensom"), it was released as the second single from the album.

In 2011 her Danish studio album For Altid was released, including the single's "Synd for Dig", "For Altid", "Kl. 10", "12 Dage", "Lyser i Morke", and "Har du Glemt". The repackaged special edition included the final single "Junkie (featuring Svenstrup)", the latter released single's take on a more EDM, Dance-Pop sound, reminiscent of Velkommen til Medina. It was followed up in 2012 by the English version of the same name, titled Forever.

From 2013 to 2015 Medina went on a short hiatus between 2012–14, later embarking on smaller projects, including the release of an urban inspired EP, and a live album, which are both primarily in Danish.

Medina has released several new singles (featuring a single with the band Zookeeper's). In the first half of 2020 she released a new live album titled Det Bliver Altid Forår, the album includes several of her most famous Danish singles recorded and performed amidst a live audience, prior to the outbreak of Covid-19. She also married her partner in mid 2020. In July 2020 Medina announced via social media that new music was coming, leading to speculation that she would be releasing a new album, it is set to include multiple languages, a first for Medina. However, it has not been confirmed by Medina whether those rumours are true. Medina's new album is set to have a more urban, and EDM sound compared to her previous studio albums.

In the latter half of 2020 Medina would go onto release several new singles, mostly in Danish, including several Danish covers from the new season of "Toppen Af Poppen" (Danish TV Show), where she makes a return for the new season of the show.

Her fans call themselves "Medivas". [15]

Medina's father is Chilean, [2] her mother is a Dane that grew up in Malaysia. [15] She changed her name in 2005 to Medina Danielle Oona Valbak after visiting a numerologist. [2] [15] The name "Medina" is not a reference to the Saudi Arabian city of Medina, rather it is a common name in Chile. [15]

Medina was confirmed in August 2020 to be expecting her first child with husband Malo Chapsal. [18] 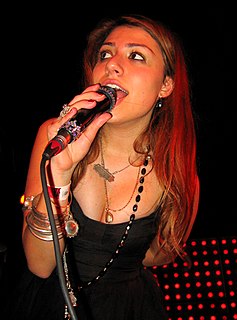 "You and I" is a song by Danish electropop singer Medina. It was released in the United Kingdom on 21 September 2009 and in Germany, Austria and Switzerland on 3 May 2010. The song is an English version of the Danish song, "Kun for mig", released in late 2008 in Denmark, where it spent 52 weeks on the singles chart; six weeks at number one. Produced by hip hop producers Providers, "Kun for mig" was the best selling single of 2009 in Denmark. Originally written by Medina, Jeppe Federspiel and Rasmus Stabell it was translated into English by Adam Powers and Julie Steincke, and released as Medina's debut single from her international studio album, Welcome to Medina.

Anne Mondrup Gadegaard Jensen, better known as Anne Gadegaard, is a Danish singer and songwriter. She is best known for finishing 5th at the Junior Eurovision Song Contest 2003 while representing Denmark.

Velkommen til Medina is the second studio album by the Danish pop singer Medina. It was produced by Providers and Motrack, and released on August 31, 2009, in Denmark. 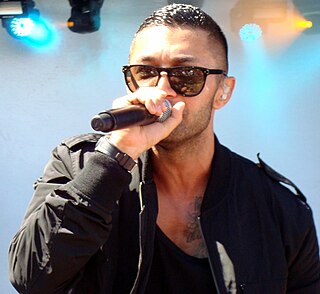 Providers is a Danish hip hop, R&B and pop song production team made up of Jeppe Federspiel and Rasmus Stabell.

Welcome to Medina is the international debut studio album by Danish-Chilean electropop singer Medina. It was released on 23 July 2010 in Germany, Switzerland and Austria. The album was preceded by the release of the lead single, "You and I", on 3 May 2010.

"Kun for mig" is a song by Danish singer Medina. The song is written by Medina, Jeppe Federspiel and Rasmus Stabell. It was released in 2008 in Denmark by Medina. The song peaked at #1 of the Danish Singles Chart for 7 weeks in 3 runs and stayed a total of 63 weeks in the Danish charts. Produced by hip hop producers Providers, "Kun for mig" became the best selling single of 2009 in Denmark. 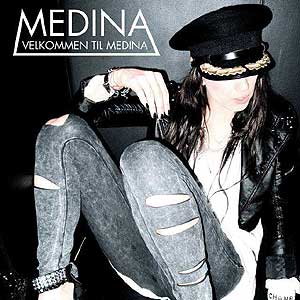 Burhan G is the third studio album from the Danish R&B singer Burhan G which was released on 12 April 2010 at Copenhagen Records. This is however his first Danish language album after two all-English language albums Playground in 2004 and Breakout in 2007. The album Burhan G was developed with the collaboration of Rasmus Seebach and Nik & Jay and producers Jon & Jules of the Providers. The album reached #2 in the Danish Albums Chart making it the most successful album thus far of Burhan G. 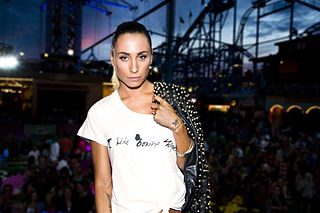 The discography of Danish pop artist Medina consists of seven studio albums. Three of these have spawned commercially successful singles that have peaked at number one on the official Danish singles chart. In total, Medina has forty-three singles with her most successful one internationally being "You and I". 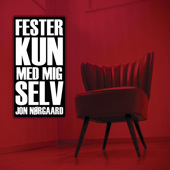 "Fester Kun Med Mig Selv" is a single by Danish singer Jon Nørgaard, from his third studio album Uden dig. It was released in Denmark as a digital download on 27 June 2011. The song has peaked to number 39 on the Danish Singles Chart.

Ensom is a song by Danish singer Medina from her second studio album Velkommen til Medina. It was released as the third single from the album on 2 November 2009. The song was written by Medina, Rasmus Stabell and Jeppe Federspiel and was produced by Providers. "Ensom" peaked at number two in Denmark. 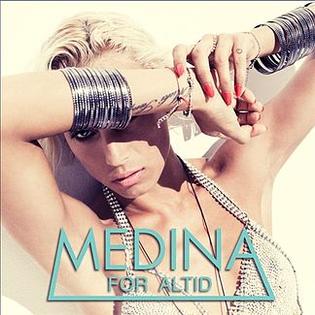 For altid (Forever) is the fourth studio album released by Danish-Chilean electropop singer Medina. It was released in Denmark on 19 September 2011 through Labelmade, A:larm and Universal Music, peaking at number 2 on the Danish Albums Chart. Three singles of this album have peaked at number 1 on the Danish Singles Chart, and the other singles were all in the top ten.

Forever is the second English-language album by Danish singer Medina. It was released on 1 June 2012 through EMI. The album consists of ten original songs and three translated songs from her third Danish album, For altid (2011): "Forever", "Happening" and "Black Lights". "Forever" was released as the album's lead single on 13 April 2012. 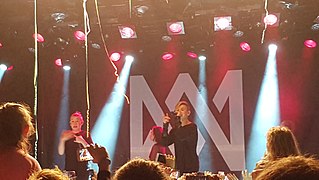 Marcus & Martinus, occasionally known as M&M, are a Norwegian pop-duo consisting of twin brothers Marcus and Martinus Gunnarsen. They have released three albums: Hei, Together and Moments. Since winning Melodi Grand Prix Junior in 2012 they have won numerous prizes such as Spellemannprisen in 2017.

Signe Svendsen is a Danish singer. She took part in Eurovision Song Contest 2001 with the duo formation Rollo & King singing "Never Ever Let You Go" that was runner-up in the competition. She has developed a solo career with release of two albums. 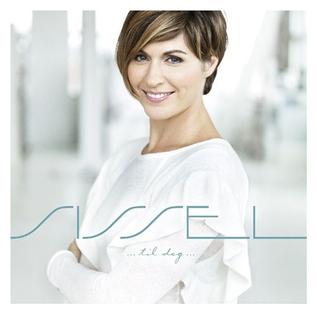 Til deg is a 2010 folk/roots/country album by Norwegian singer Sissel Kyrkjebø, which was released in Scandinavia. This album includes songs in Norwegian, Swedish and English.

Tæt På - Live is a live album released by Danish-Chilean singer Medina. It was released on 17 March 2014 as a digital download in Denmark. The album peaked at number 2 on the Danish Albums Chart.