Hopkins' work concentrates on algebraic topology, especially stable homotopy theory. It can roughly be divided into four parts (while the list of topics below is by no means exhaustive):

The Ravenel conjectures very roughly say: complex cobordism (and its variants) see more in the stable homotopy category than you might think. For example, the nilpotence conjecture states that some suspension of some iteration of a map between finite CW-complexes is null-homotopic iff it is zero in complex cobordism. This was proven by Ethan Devinatz, Hopkins and Jeff Smith (published in 1988). [1] The rest of the Ravenel conjectures (except for the telescope conjecture) were proven by Hopkins and Smith soon after (published in 1998). [2] Another result in this spirit proven by Hopkins and Douglas Ravenel is the chromatic convergence theorem, which states that one can recover a finite CW-complex from its localizations with respect to wedges of Morava K-theories.

This part of work is about refining a homotopy commutative diagram of ring spectra up to homotopy to a strictly commutative diagram of highly structured ring spectra. The first success of this program was the Hopkins–Miller theorem: It is about the action of the Morava stabilizer group on Lubin–Tate spectra (arising out of the deformation theory of formal group laws) and its refinement to

-ring spectra – this allowed to take homotopy fixed points of finite subgroups of the Morava stabilizer groups, which led to higher real K-theories. Together with Paul Goerss, Hopkins later set up a systematic obstruction theory for refinements to

-ring spectra. [3] This was later used in the Hopkins–Miller construction of topological modular forms. [4] Subsequent work of Hopkins on this topic includes papers on the question of the orientability of TMF with respect to string cobordism (joint work with Ando, Strickland and Rezk). [5] [6]

On 21 April 2009, Hopkins announced the solution of the Kervaire invariant problem, in joint work with Mike Hill and Douglas Ravenel. [7] This problem is connected to the study of exotic spheres, but got transformed by work of William Browder into a problem in stable homotopy theory. The proof by Hill, Hopkins and Ravenel works purely in the stable homotopy setting and uses equivariant homotopy theory in a crucial way. [8]

This includes papers on smooth and twisted K-theory and its relationship to loop groups [9] and also work about (extended) topological field theories, [10] joint with Daniel Freed, Jacob Lurie, and Constantin Teleman.

He gave invited addresses at the 1990 Winter Meeting of the American Mathematical Society in Louisville, Kentucky, at the 1994 International Congress of Mathematicians in Zurich, [11] and was a plenary speaker at the 2002 International Congress of Mathematicians in Beijing. [12] He presented the 1994 Everett Pitcher Lectures at Lehigh University, the 2000 Namboodiri Lectures at the University of Chicago, the 2000 Marston Morse Memorial Lectures at the Institute for Advanced Study, Princeton, the 2003 Ritt Lectures at Columbia University and the 2010 Bowen Lectures in Berkeley. In 2001 he was awarded the Oswald Veblen Prize in Geometry from the AMS for his work in homotopy theory, [13] [14] 2012 the NAS Award in Mathematics and 2014 the Nemmers Prize in Mathematics. He was named to the 2021 class of fellows of the American Mathematical Society "for contributions to algebraic topology and related areas of algebraic geometry, representation theory, and mathematical physics". [15]

Algebraic K-theory is a subject area in mathematics with connections to geometry, topology, ring theory, and number theory. Geometric, algebraic, and arithmetic objects are assigned objects called K-groups. These are groups in the sense of abstract algebra. They contain detailed information about the original object but are notoriously difficult to compute; for example, an important outstanding problem is to compute the K-groups of the integers.

In stable homotopy theory, a branch of mathematics, Morava K-theory is one of a collection of cohomology theories introduced in algebraic topology by Jack Morava in unpublished preprints in the early 1970s. For every prime number p, it consists of theories K(n) for each nonnegative integer n, each a ring spectrum in the sense of homotopy theory. Johnson & Wilson (1975) published the first account of the theories.

Jeffrey Henderson Smith is a former professor of mathematics at Purdue University in Lafayette, Indiana. He received his Ph.D. from the Massachusetts Institute of Technology in 1981, under the supervision of Daniel Kan, and was promoted to full professor at Purdue in 1999. His primary research interest is algebraic topology; his best-cited work consists of two papers in the Annals of Mathematics on "nilpotence and stable homotopy".

In mathematics, elliptic cohomology is a cohomology theory in the sense of algebraic topology. It is related to elliptic curves and modular forms. 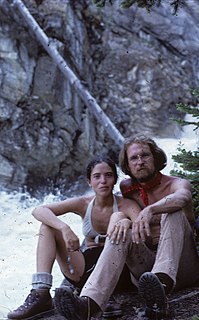 In algebraic topology, the nilpotence theorem gives a condition for an element of the coefficient ring of a ring spectrum to be nilpotent, in terms of complex cobordism. It was conjectured by Douglas Ravenel (1984) and proved by Ethan S. Devinatz, Michael J. Hopkins, and Jeffrey H. Smith (1988).

In mathematics, the Ravenel conjectures are a set of mathematical conjectures in the field of stable homotopy theory posed by Douglas Ravenel at the end of a paper published in 1984. It was earlier circulated in preprint. The problems involved have largely been resolved, with all but the "telescope conjecture" being proved in later papers by others. The telescope conjecture is now generally believed not to be true, though there are some conflicting claims concerning it in the published literature, and is taken to be an open problem. Ravenel's conjectures exerted influence on the field through the founding of the approach of chromatic homotopy theory.

Goro Nishida was a Japanese mathematician. He was a leading member of the Japanese school of homotopy theory, following in the tradition of Hiroshi Toda.

In mathematics, chromatic homotopy theory is a subfield of stable homotopy theory that studies complex-oriented cohomology theories from the "chromatic" point of view, which is based on Quillen's work relating cohomology theories to formal groups. In this picture, theories are classified in terms of their "chromatic levels"; i.e., the heights of the formal groups that define the theories via the Landweber exact functor theorem. Typical theories it studies include: complex K-theory, elliptic cohomology, Morava K-theory and tmf.