The league lies in the fifth level of the Welsh football league system. Teams may be promoted to the Mid Wales Football League if standards and facilities fall into line with the regulations of the Mid Wales League. There is no league directly below the South League however.

The league is sometimes written as the "Mid-Wales League (South)".

In the 2019-20 season, when the season was curtailed due to the coronavirus pandemic, Brecon Corries were champions with a 100% record of 16 wins from 16 games with 143 goals scored and just two conceded. [2] In addition to these statistics the team scored a 27-0 win at Knighton Town Reserves which was expunged from the record books following Knighton’s withdrawal from the league.

Number of titles by winning clubs 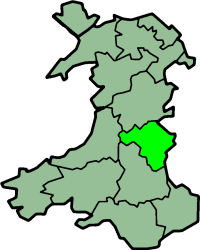 Radnorshire is a sparsely populated area, one of thirteen historic and former administrative counties of Wales. It is represented by the Radnorshire area of Powys, which according to the 2011 census, had a population of 25,821. The historic county was bounded to the north by Montgomeryshire and Shropshire, to the east by Herefordshire, to the south by Brecknockshire and to the west by Cardiganshire.

Presteigne is a town and community in Radnorshire, Powys, Wales on the south bank of the River Lugg. Formerly the county town of the historic county of Radnorshire, the town has, in common with several other towns close to the Wales-England border, assumed the motto, "Gateway to Wales". The border wraps around three sides of the town. Nearby towns are Kington, Herefordshire to the south and Knighton to the north, and surrounding villages include Norton and Stapleton. The town falls within the Diocese of Hereford. The community has a population of 2,710; the built-up area had a population of 2,056. Only a quarter of the community was born in Wales.

Sennybridge is a village in the historic county of Brecknockshire, Wales, now within the unitary authority area of Powys, situated some 42 miles (68 km) from Cardiff and 31 miles (50 km) from Swansea. It lies 9 miles (14 km) west of Brecon on the A40 trunk road to Llandovery, at the point where the Afon Senni flows into the Usk. It is in the community of Maescar.

The A479, officially also known as the Glanusk Park (Crickhowell)—Llyswen Trunk Road, is a trunk road in Wales. It connects Crickhowell to Llyswen via the Rhiangoll valley and Talgarth, running through the Brecon Beacons National Park.

The Mid-Wales Railway was a railway company intended to make a trunk route through Wales, connecting industrial areas of north west England with sea ports in south west Wales. In fact it was prevented from reaching its goal by competing proposals in Parliament, and it was limited to a line between Llanidloes and a junction with the Brecon and Merthyr Railway 5 miles (8 km) east of Brecon. It was 70 miles (110 km) in length and opened in 1864. It had found it impossible to raise share subscription, but the contractor partnership of Davies and Savin agreed to build the line and take shares in payment,

Llangurig railway station was intended to serve the village and rural locale of Llangurig in the Welsh county of Powys. The station, which was on the Llangurig branch, was built and operated by the Manchester and Milford Railway (M&MR). It was to be located in a shallow rock cutting just above the village. 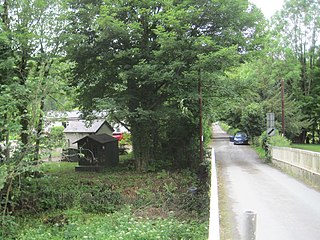 Llandinam railway station was a station serving Llandinam, Powys, on the Llanidloes and Newtown Railway (L&NR) line. The L&NR was authorised in August 1853; construction began in October 1855 and the line was opened between those points for goods traffic only on 30 April 1859 – passengers were carried from 31 August 1859. Llandinam was one of three intermediate stations on the 13-mile line. The station was opened in 1859 by David Davies who was born in Llandinam and was a major contractor for building the line. In July 1864 the L&NR amalgamated with three other railways to create the Cambrian Railways, which in January 1922 amalgamated with the Great Western Railway which itself became part of British Railways in 1948.

Brecon Corinthians A.F.C. are a Welsh football club from the town of Brecon in Powys. The club has played for most of its history in South Wales football, with substantial periods in the Welsh Football League. They currently play in the Mid Wales Football League East Division, having been promoted as champions from Mid Wales League (South) having previously played in the South Wales Alliance League.