The Port Talbot & District Football League, also known as the Port Talbot Football League is a league competition featuring non-professional association football clubs in the area of Port Talbot, South Wales. Founded in 1926, it is one of the oldest such competition in Wales. The main competition consists of one division, which splits midway through into two conferences which are named "Premier League" & "Division One" . The Premier League is a feeder to the South Wales Alliance League Division Two, and therefore sits at tier 7 of the Welsh football pyramid.

Among the clubs who have progressed to a higher level from the Port Talbot Football League is Goytre United, Cornelly United and Tata Steel.

Aberavon is a constituency represented in the House of Commons of the Parliament of the United Kingdom since 2015 by Stephen Kinnock of the Welsh Labour Party. It includes the town of Aberavon, although the largest town in the constituency is Port Talbot. 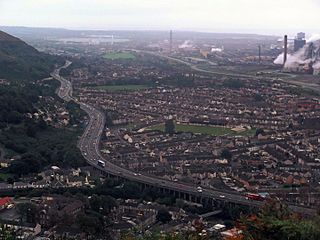 Port Talbot is a town and community in the county borough of Neath Port Talbot, Wales, situated on the east side of Swansea Bay, approximately eight miles from Swansea. The Port Talbot Steelworks covers a large area of land which dominates the south east of the town and is one of the biggest steelworks in the world but has been under threat of closure since the 1980s. The population was 37,276 in 2011.

Goytre United Football Club is a Welsh football club based in Goytre, near Port Talbot. They play in the Cymru South. Despite winning Division One of the Welsh Football League in 2005–06 and 2007–08 they were not promoted to the Welsh Premier League. 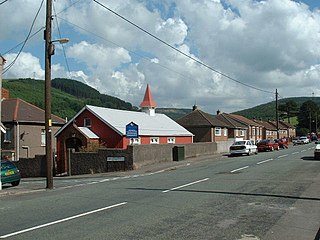 Goytre is a village near the town of Port Talbot, Wales.

Croeserw Athletic are a local league football club based in Croeserw, Port Talbot, Wales. The club competes in the Port Talbot Football League, with the first team playing in the Premier Division, and the second team playing in Division One. They are one of the biggest clubs in Port Talbot, with their squad size currently at a high of over 40 players. They play their home games at Tudor Park, which is the highest football pitch in Port Talbot in terms of altitude. They also play league games at the Red Field in Cymmer, the former home of Abercregan United.

The Cymru South is a regional football league in Wales, covering the southern half of the country. It has semi-professional status clubs and together with the Cymru North, it forms the second tier of the Welsh football league system.

Gwynfi United F.C. is a Welsh football club from Blaengwynfi, a village in the Neath Port Talbot area of South Wales. They currently play in the Port Talbot Football League Premier Division. The club played in the Welsh Football League for eleven seasons from 1996–97 until 2006–07 when they resigned from the league and their results from the season were expunged.

The Welsh Football League Division One 2019–20 season is the final season of this football league in South Wales. It is due to be replaced by the FAW League One for 2020–21. It is Tier 3 of the Welsh League Pyramid in South Wales.

The 2020–21 Cymru South season would have been the second season of the second-tier Southern region football in Welsh football pyramid. Teams were play each other twice on a home and away basis.

The 2020–21 Welsh League Cup will be the 29th season of the Welsh League cup competition, which was established in 1992. The reigning champions are Connah's Quay Nomads.

The 2021–22 Welsh League Cup will be the 30th season of the Welsh League cup competition, which was established in 1992. The reigning champions are Connah's Quay Nomads.