The New York State Council on the Arts (NYSCA) is an arts council serving the U.S. state of New York. It was established in 1960 through a bill introduced in the New York State Legislature by New York State Senator MacNeil Mitchell (1905–1996), with backing from Governor Nelson Rockefeller, and began its work in 1961. It awards more than 1,900 grants each year to arts, culture, and heritage non-profits and artists throughout the state. Its headquarters are in Manhattan, New York City.

As stated on its website, the council "is dedicated to preserving and expanding the rich and diverse cultural resources that are and will become the heritage of New York's citizens."

The Chairperson of NYSCA is Katherine Nicholls, and the Executive Director is Mara Manus. 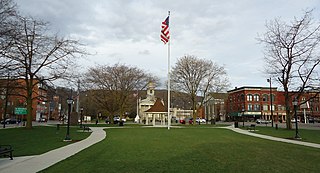 Norwich is a city in Chenango County, New York, United States. Surrounded on all sides by the town of Norwich, the city is the county seat of Chenango County. The name is taken from Norwich, England. Its population was 7,190 at the 2010 census.

Bunita Marcus, began studying composition at the age of sixteen and worked in both electronic and instrumental mediums while at the University of Wisconsin. In 1981 she received a Ph.D. in Composition from the University at Buffalo, The State University of New York where she held the Edgard Varèse Fellowship in Composition and studied with Morton Feldman. Marcus' music has been consistently praised for its beauty and rare sensitivity. Kyle Gann of the Village Voice has called her one of his favorite female composers of all time. He applauds her piano work Julia for its "touching and unassuming depth," which "had the audience hushed under the impact of deeply communicated feeling." Los Angeles critic Alan Rich says her work Adam and Eve "states an eloquent case for the persistence of pure beauty in contemporary composition."

Kitty Carlisle Hart was an American actress, singer, and spokeswoman for the arts. She is best remembered as a regular panelist on the television game show To Tell the Truth. She served 20 years on the New York State Council on the Arts.

The League of Electronic Musical Urban Robots, or LEMUR, is a Brooklyn-based group of artists and technologists developing robotic musical instruments. Founded in 2000 by musician and engineer Eric Singer, LEMUR's philosophy is to build robotic instruments that play themselves. In LEMUR designs, the robots are the instruments.

The New York State Chess Association (NYSCA) is the oldest continuously-run chess organization in the United States, having been formed in Auburn, New York in 1878, as the "Western New York and Northern Pennsylvania Chess Association." The NYSCA name has been used since 1886. It is the official New York State affiliate of the United States Chess Federation, and its history pre-dates the establishment of USCF. It organizes a variety of State-sanctioned championship tournaments across the Empire State, including the annual New York State Chess Championship, which has been held in Albany on Labor Day weekend since 2006.

Catherine Filloux is a French-American playwright She has received awards from the Kennedy Center Fund for New American Plays, the O'Neill, the MAP Fund, and the Asian Cultural Council. Catherine is the winner of the 2017 Otto René Castillo Award for Political Theatre in New York City, and she received the 2015 Planet Activist Award "to acknowledge Filloux's dedication to art and activism, in the theater community," Planet Connections, New York City. She has been a Fulbright Senior Specialist in playwriting in Cambodia and Morocco.

Sabrina Artel's Trailer Talk is combination live performance, community event, and radio broadcast based in the New York's Catskills region. With her vintage 1965 Beeline travel trailer, Sabrina Artel travels to festivals and events where she invites individuals to participate in what she calls a "public conversation" in a relaxed and comfortable setting. These conversations are broadcast live through speakers mounted outside the trailer and many interviews are later aired on public radio station Radio Catskill WJFF-FM where Sabrina is a regular producer. The New York Times article A 1965 Trailer Goes on the Road, and Catskill Residents Go on the Air described Sabrina Artel's Trailer Talk as "an unusual blend of theater, activism and broadcast journalism."

Futurepoem Books is an American not-for-profit press based in New York City. Futurepoem was founded by Dan Machlin in 2002 and focuses on publishing innovative poetry, prose and hybrid literature. The press has a rotating editorial board.

Vidya Subramanian is a Carnatic style vocalist and teacher. She is a disciple of Padmabhushan Lalgudi Sri Jayaraman. In addition to this, she is a Chartered accountant, with an MBA from Boston College "which has enabled me to emerge as a successful entrepreneur with my online Carnatic music academy and has also helped me make award winning grant proposals". She lives in Chennai, India.

Barbaralee Diamonstein-Spielvogel is an American preservationist, historian, author, and television producer. She is an advocate for the preservation of the historic built environment. She has worked in the fields of art, architecture, crafts, historic preservation, fashion, and public policy in the U.S. She is the author of 24 books, numerous articles and essays, and recipient of many honors and awards. She is a former White House Assistant, the first Director of Cultural Affairs in New York City, and the longest serving New York City Landmarks Preservation Commissioner.

Marion Faller was an American photographer. Faller's work has been shown in a range of exhibitions, is held in various public collections and she has received fellowships from a number of institutions.

Maureen Connor is an American artist who creates installations and videos dealing with human resources and social justice. She is known internationally for her work from the 1980s to the present, which focuses on gender and its modes of representation. 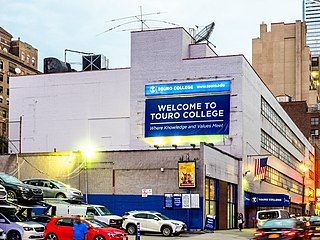 Touro College and University System is a private university system, headquartered in New York City, New York, in the United States with branches throughout the US and in other countries. It was founded by Bernard Lander in 1971 and named for Isaac and Judah Touro and it's the largest private university in the US with Jewish roots. The university initially focused on higher education for the Jewish community, but it now serves a diverse population of over 18,000 students across 30 schools in four countries.

Stefanie Claire Zadravec is an American playwright. Her full-length plays include Tiny Houses, Colony Collapse, The Electric Baby, Honey Brown Eyes, and Save Me. She has won numerous awards including the Helen Merrill Emerging Playwright Award, Francesca Primus Prize, and the Helen Hayes Award for Outstanding New Play. She is a resident playwright at New Dramatists.

Christie Neptune is a West Indian-American visual artist. She was a 2018 recipient of an Artist Fellowship from the New York Foundation for the Arts. She is best known for her exhibition "She Fell From Normalcy," which depicts an afro-surrealist, sci-fi fantasy world.

Prem Krishnamurthy is a designer, curator, teacher, and writer based in Berlin and New York City. He is a partner in the multidisciplinary design studio Wkshps. In 2015, Krishnamurthy was awarded Cooper Hewitt’s National Design Award for Communication Design.