Panic buying (alternatively hyphenated as panic-buying; also known as panic purchasing) occurs when consumers buy unusually large amounts of a product in anticipation of, or after, a disaster or perceived disaster, or in anticipation of a large price increase or shortage.

Panic buying during health crises is influenced by "(1) individuals' perception of the threat of a health crisis and scarcity of products; (2) fear of the unknown, which is caused by emotional pressure and uncertainty; (3) coping behaviour, which views panic buying as a venue to relieve anxiety and regain control over the crisis; and (4) social psychological factors, which account for the influence of the social network of an individual." [1]

Panic buying is a type of herd behavior. [2] It is of interest in consumer behavior theory, the broad field of economic study dealing with explanations for "collective action such as fads and fashions, stock market movements, runs on nondurable goods, buying sprees, hoarding, and banking panics." [3]

Panic buying can lead to genuine shortages regardless of whether the risk of a shortage is real or perceived; the latter scenario is an example of self-fulfilling prophecy. [4]

Panic buying occurred before, during, or following:

Panic buying became a major international phenomenon in February and March 2020 during the early onset of the COVID-19 pandemic, and continued in smaller, more localized waves throughout during sporadic lockdowns across the world. Stores around the world were depleted of items such as face masks, food, bottled water, milk, toilet paper, [33] hand sanitizer, rubbing alcohol, antibacterial wipes and painkillers. [34] [35] [36] [37] [38] [39] As a result, many retailers rationed the sale of these items. [40] Online retailers eBay and Amazon began to pull certain items listed for sale by third parties such as toilet paper, [41] face masks, pasta, canned vegetables, hand sanitizer and antibacterial wipes over price gouging concerns. [42] [43] As a result, Amazon restricted the sale of these items and others (such as thermometers and ventilators) to healthcare professionals and government agencies. [44] Additionally, panic renting of self-storage units took place during the onset of the pandemic. [45] The massive buyouts of toilet paper caused bewilderment and confusion from the public. Images of empty shelves of toilet paper were shared on social media in many countries around the world, e.g. Australia, United States, the United Kingdom, Canada, Singapore, Hong Kong and Japan. In Australia, two women were charged over a physical altercation over toilet paper at a supermarket. [46] The severity of the panic buying drew criticism; particularly from Prime Minister of Australia Scott Morrison, calling for Australians to "stop it". [47] Research on this specific social phenomenon of toilet paper hoarding suggested that social media had played a crucial role in stimulating mass-anxiety and panic. [48] Social media research found that many people posting about toilet paper panic buying were negative, either expressing anger or frustration over the frantic situation. This high amount of negative viral posts could act as an emotional trigger of anxiety and panic, spontaneously spreading fear and fueling psychological reactions in midst of the crisis. It may have triggered a snowball effect in the public, encouraged by the images and videos of empty shelves and people fighting over toilet rolls. 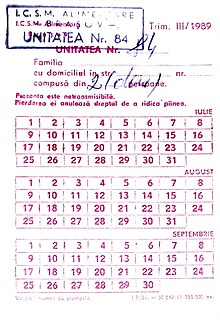 Rationing is the controlled distribution of scarce resources, goods, services, or an artificial restriction of demand. Rationing controls the size of the ration, which is one's allowed portion of the resources being distributed on a particular day or at a particular time. There are many forms of rationing, although rationing by price is most prevalent.

Consumer goods in the Soviet Union were usually produced by a two-category industry. Group A was "heavy industry", which included all goods that serve as an input required for the production of some other, final good. Group B was "consumer goods", final goods used for consumption, which included food, clothing and shoes, housing, and such heavy-industry products as appliances and fuels that are used by individual consumers. From the early days of the Stalin era, Group A received top priority in economic planning and allocation so as to industrialize the Soviet Union from its previous agricultural economy. 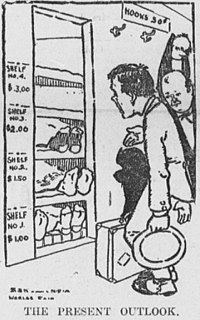 Price gouging occurs when a seller increases the prices of goods, services or commodities to a level much higher than is considered reasonable or fair. Usually, this event occurs after a demand or supply shock. Common examples include price increases of basic necessities after natural disasters. In precise, legal usage, it is the name of a crime that applies in some jurisdictions of the United States during civil emergencies. In less precise usage, it can refer either to prices obtained by practices inconsistent with a competitive free market or to windfall profits. Price gouging may be considered exploitative and unethical. Price gouging became highly prevalent in the news in the wake of the COVID-19 pandemic when state price gouging regulations went into effect due to the national emergency. The rise in public discourse was associated with increased shortages related to the COVID-19 pandemic. 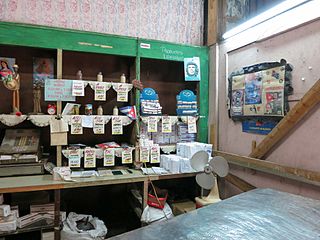 Rationing in Cuba is organized by the government and implemented by means of a Libreta de Abastecimiento assigned to every individual. The system establishes the amounts of subsidized rations each person is allowed to receive through the system, and the frequency at which supplies can be obtained. While the food rations are not free, the ration fees are a small fraction of the actual price of the goods. Purchases of the goods can also be made outside of the system, but they are typically too expensive for most Cubans to afford.

A showbag is a themed bag of commercial products, novelty items and promotional merchandise, usually made available for purchase. It is a distinctive feature of Australian agricultural shows, where they are sold from stalls; they can also be found at exhibitions, festivals and fundraising events. Showbags are unique to Australia.

A market run or run on the market occurs when consumers increase purchasing of a particular product because they fear a shortage. As a market run progresses, it generates its own momentum: as more people demand the item, the supply line becomes unable to keep up. This causes a local shortage, which in turn encourages further hoarding. 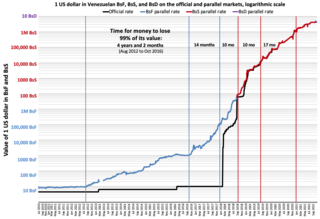 When elected in 2013, Nicolás Maduro continued the majority of existing economic policies of his predecessor Hugo Chávez. When entering the presidency, President Maduro's Venezuela faced a high inflation rate and large shortages of goods that was left over from the previous policies of President Chávez. These economic difficulties that Venezuela was facing were one of the main reasons of the current protests in Venezuela. President Maduro has blamed capitalism for speculation that is driving high rates of inflation and creating widespread shortages of staples, and often said he was fighting an "economic war", calling newly enacted economic measures "economic offensives" against political opponents he and loyalists state are behind an international economic conspiracy. However, President Maduro has been criticized for only concentrating on public opinion instead of tending to the practical issues economists have warned the Venezuelan government about or creating any ideas to improve the economic situation in Venezuela such as the "economic war". 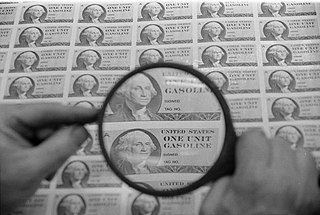 Rationing is the controlled distribution of scarce resources, goods, or services, or an artificial restriction of demand. Rationing controls the size of the ration, which is one person's allotted portion of the resources being distributed on a particular day or at a particular time. 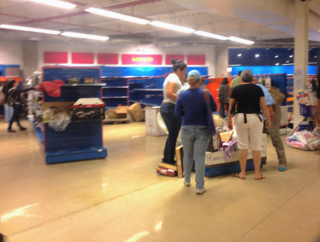 Dakazo refers to a set of actions taken by the Venezuelan government forcing consumer electronic retail stores, with Daka being the most prominent, to sell products at much lower prices on 8 November 2013, weeks before municipal elections. The forced Daka price changes helped Venezuela's ruling party, PSUV, win in some of the municipal elections, though the massive sale of goods caused further shortages in the months following the initiative. 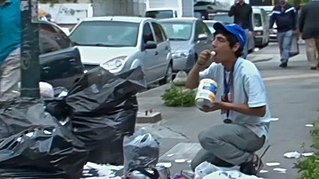 Shortages in Venezuela of regulated food staples and basic necessities have been widespread following the enactment of price controls and other policies under the government of Hugo Chávez and exacerbated by the policy of withholding United States dollars from importers under the government of Nicolás Maduro. The severity of the shortages has led to the largest refugee crisis ever recorded in the Americas. 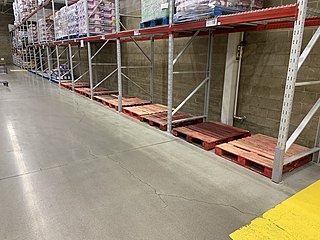 Shortages of medical materials, manufacturing and consumer goods caused by the COVID-19 pandemic quickly became a major issue worldwide, as did interruptions to the global supply chain, which has challenged supply chain resilience across the globe. Shortages of personal protective equipment, such as medical masks and gloves, face shields, and sanitizing products, along with hospital beds, ICU beds, oxygen therapy equipment, ventilators, and ECMO devices were reported in most countries.

The COVID-19 recession is a global economic recession caused by the COVID-19 pandemic. The recession, which began in February 2020, is the worst global financial crisis since the Great Depression.

The COVID-19 pandemic has had far-reaching economic consequences beyond the spread of the disease itself and efforts to quarantine it. As the SARS-CoV-2 virus has spread around the globe, concerns have shifted from supply-side manufacturing issues to decreased business in the services sector. The pandemic caused the 2nd largest global recession in history, with more than a third of the global population at the time being placed on lockdown.

The COVID-19 pandemic has taken a sharp economic toll on the retail industry worldwide as many retailers and shopping centers were forced to shut down for months due to mandated stay-at-home orders. As a result of these closures, online retailers received a major boost in sales as customers looked for alternative ways to shop and the effects of the retail apocalypse were exacerbated. A number of notable retailers filed for bankruptcy including Ascena Retail Group, Debenhams, Arcadia Group, Brooks Brothers, GNC, J. C. Penney, Lord & Taylor and Neiman Marcus.

The COVID-19 pandemic in Malaysia has had a significant impact on the Malaysian economy, leading to the devaluation of the Malaysian ringgit (MYR) and the decline in the country's gross domestic product. The pandemic also adversely affected several key sectors including entertainment, markets, retail, hospitality, and tourism. Besides shortages in goods and services, many businesses had to cope with social distancing and lockdown restrictions, which affected their operations and revenue.The pandemic also drew attention to workplace safety and the exploitation of migrant workers working in Malaysian industries.