Lawrence Patrick Hill (born December 17, 1951) is an American football coach, former player, and hot dog race announcer. He served as the head football coach at Fresno State from 1997 until his dismissal following the 2011 season. In 15 seasons as head coach as Fresno State, he led the Bulldogs to a record of 112–80, 11 bowl game appearances, and a share of the 1999 Western Athletic Conference title.

Hill took on the head coaching job at Fresno State in 1997, where he had previously served as the offensive line coach from 1984 to 1989. Coming into the 2005 season, Hill had compiled a 64-38 win-loss record, including a 44-19 Western Athletic Conference mark, one WAC title, and a 10-8 record against BCS AQ conference teams, the most by any BCS non-AQ conference team. Under Hill Fresno State routinely scheduled—and defeated—highly ranked opponents from power conferences. Taking his cue from how Bobby Bowden turned Florida State into a powerhouse, Hill let it be known soon after arriving in Fresno that his Bulldogs would play "anybody, anywhere, anytime." [1]

On December 4, 2011, Hill was let go by Fresno State, despite his achievements for such a location. [7] 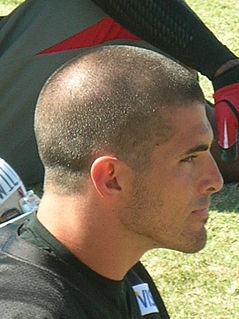 David Duke Carr is a former American football quarterback who played in the National Football League (NFL). He was drafted by the Houston Texans first overall in the 2002 NFL Draft. He played college football at Fresno State. Carr also played professionally for the Carolina Panthers, New York Giants, and San Francisco 49ers. He received a Super Bowl ring as a backup for the Giants after their victory over the New England Patriots in Super Bowl XLVI. Carr's status as a number one draft pick and subsequent career has led to him being considered a draft bust. 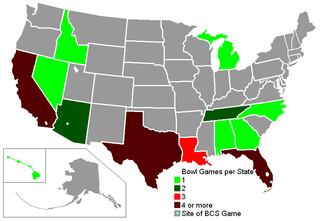 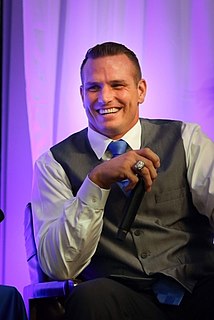 Stephen Joseph Spach is a former American football tight end who played in the National Football League. He was signed by the Philadelphia Eagles of the National Football League as an undrafted free agent in 2005. He played college football at Fresno State. Spach was also a member of the Minnesota Vikings, New England Patriots, Arizona Cardinals, St. Louis Rams, and Jacksonville Jaguars. 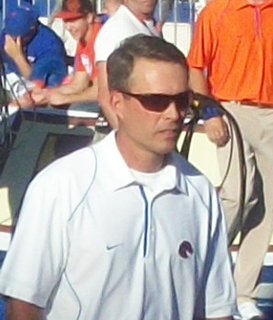 Christopher Scott Petersen is an American football coach who was most recently the head coach at the University of Washington. Previously the head coach for eight seasons at Boise State University, Petersen guided the Broncos to two BCS bowl wins: the 2007 and 2010 Fiesta Bowls. He is the first two-time winner of the Paul "Bear" Bryant Award, which he won in 2006 and 2009. Petersen also won the Bobby Dodd Coach of the Year Award in 2010. At Washington, Petersen led the Huskies to the College Football Playoff in 2016, but fell to Alabama in the Peach Bowl. Petersen announced his resignation on December 2, 2019, to be effective after the team's bowl game.

The Delaware Fightin' Blue Hens football team represents the University of Delaware in National Collegiate Athletic Association (NCAA) Division I Football Championship Subdivision (FCS) college football. The team is currently led by head coach Danny Rocco and plays on Tubby Raymond Field at 22,000-seat Delaware Stadium located in Newark, Delaware. The Fightin' Blue Hens have won six national titles in their 117-year history – 1946, 1963, 1971, 1972, 1979, and 2003. They returned to the FCS National Championship game in 2007 and 2010. The program has produced NFL quarterbacks Rich Gannon, Joe Flacco, Jeff Komlo, and Scott Brunner. The Blue Hens are recognized as a perennial power in FCS football and Delaware was the only FCS program to average more than 20,000 fans per regular-season home game for each season from 1999 to 2010.

The Boise State Broncos football program represents Boise State University in college football and competes in the NCAA Division I Football Bowl Subdivision (FBS) as a member of the Mountain West Conference. The Broncos play their home games on campus at Albertsons Stadium in Boise, Idaho, and their head coach is Andy Avalos. The program is 12–7 in bowl games since 1999, including a 3–0 record in the Fiesta Bowl. As of the end of the 2019 season, the Broncos' all-time winning percentage of .731 is the highest in all of collegiate football.

The Fresno State Bulldogs football team represents California State University, Fresno in NCAA Division I FBS college football as a member of the Mountain West Conference. The green "V" on the Bulldogs' helmets, uniforms, field symbolize California Central Valley, specifically the San Joaquin Valley, the agricultural valley from which they draw their support. Kalen DeBoer is the head coach.

The 2002 Miami Hurricanes football team represented the University of Miami during the 2002 NCAA Division I-A football season. It was the Hurricanes' 77th season of football and 12th as a member of the Big East Conference. The Hurricanes were led by second-year head coach Larry Coker and played their home games at the Orange Bowl. They finished the season 12–1 overall and 7–0 in the Big East to finish as conference champion. They were invited to the Fiesta Bowl, which served as the BCS National Championship Game, and lost to The Ohio State Buckeyes, 31-24, in double overtime, ending the 34-game winning streak they had brought into the game.

The 2008 Fresno State football team represented California State University, Fresno in the 2008 NCAA Division I FBS football season. The team was coached by 12th-year head coach Pat Hill, who had a contract lasting through the 2010 season. This season was the Bulldogs' 28th in their current home of Bulldog Stadium in Fresno, California.

The 2009 Wisconsin Badgers football team competed on behalf of the University of Wisconsin–Madison during the 2009 NCAA Division I FBS football season. The Badgers were coached by Bret Bielema and played their home games at Camp Randall Stadium in Madison, Wisconsin. The Badgers finished the season 10–3, 5–3 in Big Ten play and beat Miami (FL) 20–14 in the Champs Sports Bowl.

The 2010 Boise State Broncos football team represented Boise State University in the 2010 NCAA Division I FBS football season. The Broncos were led by fifth-year head coach Chris Petersen and played their home games at Bronco Stadium. They entered the 2010 season with winning streaks of 14 games overall and 25 games in regular-season play. This was the Broncos' final season as a member of the Western Athletic Conference, as the school announced on June 11, 2010, that it would leave the WAC for the Mountain West Conference effective July 1, 2011.

The 2011 Auburn Tigers football team represented Auburn University in the 2011 NCAA Division I FBS football season. The team was coached by Gene Chizik, who was in his third season with Auburn. The Tigers played their home games at Jordan–Hare Stadium in Auburn, Alabama, and competed in the Western Division of the Southeastern Conference (SEC). The Tigers entered the 2011 season after winning the 2011 BCS National Championship. Auburn finished the year 8–5 overall and 4–4 in SEC play to place fourth in the Western Division. They were invited to the Chick-fil-A Bowl, where they defeated Virginia, 43–24.

The 1982 Fresno State Bulldogs football team represented California State University, Fresno during the 1982 NCAA Division I-A football season as a member of the Pacific Coast Athletic Association. The team was led by head coach Jim Sweeney, in his fifth year, and played their home games at Bulldog Stadium in Fresno, California. They finished the 1982 season as champions of the PCAA with a record of ten wins and one loss.

The 2019 Mountain West Conference football season, part of that year's NCAA Division I FBS football season, is the 21st season of College Football for the Mountain West Conference (MW) since 2012. 12 teams have competed in the MW-football conference. The season began on August 24, 2019 and will end on November 30. The entire schedule was released on February 4, 2019.