Paul Kerr Baldwin (born 18 July 1973) is an English cricket umpire. He was born in Epsom in Surrey.

Baldwin started umpiring in 2000 and was appointed to the ICC Associates and Affiliates International Umpires Panel in 2005. [1] He made his ODI officiating debut on 5 August 2006, in the match between Scotland and Ireland. He has officiated in 18 ODIs and 9 International T20s. [2] Baldwin moved back to England for the 2009 season where his performances throughout the season earned him a place on the ECB's list of reserve first-class umpires.

Rudolf Eric Koertzen is a former international cricket umpire. Koertzen was born in Knysna in the Western Cape, South Africa. A cricket enthusiast since his youth, he played league cricket while working as a clerk for South African Railways. He became an umpire in 1981. 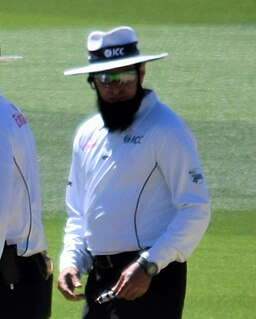 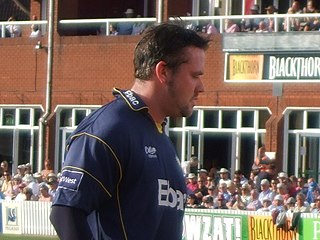 Ian David Blackwell is an English umpire and retired professional cricketer. A left-arm orthodox spinner and powerful middle-order batsman, he played for England at One Day International (ODI) and Test level, and most recently played county cricket for Warwickshire in the second half of the 2012 season. He was born at Chesterfield in Derbyshire. 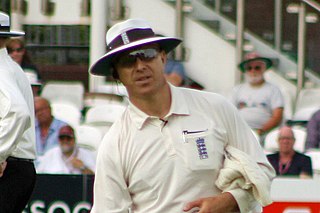 Alexander George Wharf is a former English ODI cricketer and a first-class cricketer. He is a right-handed batsman and a right-handed fast-medium bowler, who ended his career with the Welsh side Glamorgan County Cricket Club. He is now an umpire.

Nicholas Grant Billson Cook is an English cricket umpire and former player who appeared in 15 Tests and three ODIs between 1983 and 1989. A slow left-arm orthodox spin bowler and a lower order right-handed batsman, he played first-class and List A cricket from 1978 to 1994. He is currently an ECB appointed umpire on the professional circuit. He was born in Leicester and attended Lutterworth Grammar School.

George Sharp is an English former first-class cricketer and umpire.

Bruce Nicholas James Oxenford is a former Australian cricket umpire and a former cricketer. He has been an ICC international umpire since 2008, when he first umpired an ODI match. He went on to stand in his first Test match in 2010. On 26 September 2012, he was promoted to the ICC Elite Umpire Panel, the highest umpiring body in the game of cricket, replacing his fellow Australian Simon Taufel, who retired from the panel to take up a newly created ICC supervisory and training position.

Neil Laurence Bainton is an English cricket umpire. He was born at Romford in Essex in 1970.

Sanjay Sukhanand Hazare is an Indian former cricketer who became an umpire after retiring as a player.

C K Nandan is a cricket umpire and former player. His playing career included three first-class matches for Karnataka, over a period from 1983 to 1988. He made his umpiring debut in 1999, and has since umpired in various Indian domestic competitions, including Ranji Trophy and Indian Premier League matches.

Lyndon Hannibal is a Sri Lankan international cricket umpire and a former first class cricketer. He stood as an umpire in the tour match between Sri Lanka Board President's XI vs Indian national cricket team in August 2015.

Joseph Pieter Anne Willem Molenaar is a Dutch cricket umpire whose international career has spanned from the early 1980s through to the early 2010s.

Allahudien Paleker is a South African cricket umpire and former cricketer of Maharashtrian descent with roots tracing back to Ratnagiri district in Maharashtra. He is now an umpire and has stood in matches in the 2015–16 Ram Slam T20 Challenge. He is part of Cricket South Africa's umpire panel for first-class matches.

Alfred Luther Kelly is a former Kittitian cricketer who played for the Leeward Islands and the Combined Islands in West Indian domestic cricket. After retiring from playing, he took up umpiring, officiating at both the regional and international level.

Roland Black is a Northern Irish cricket umpire. He has been an umpire since 2006. He was added to ICC Associate and Affiliate Umpires Panel in 2016.