Born 18 April 1960, in Keighley West Riding of Yorkshire, Hartley made his debut for Warwickshire in 1982. He moved to Yorkshire in 1985, and stayed there until 1997, [1] when he relocated to Hampshire. When he retired at the end of the 2000 season, Hartley was Hampshire's opening bowler.

As of 2013, he remains a member of the England and Wales Cricket Board's umpire list. [5] 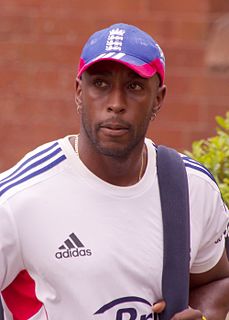 Michael Andrew Gough is an English cricket umpire and former cricketer. He was a right-handed batsman and a right-arm off-break bowler. Gough is an international umpire and is a member of the Elite Panel of ICC Umpires, representing the England and Wales Cricket Board.

Masudur Rahman is a Bangladeshi cricket umpire who formerly played at First-class and List A level.

Liam Andrew Dawson is an English cricketer who currently plays for Hampshire. He is a right-handed batsman and bowls slow left-arm orthodox spin. He has played senior cricket for the England cricket team. Dawson was part of the England squad that won the 2019 Cricket World Cup, however he did not play in any matches during the tournament.

Shaun George is a South African former cricketer who later became an umpire. He is part of Cricket South Africa's umpire panel for first-class matches.

Raymond "Ray" Julian is a former English cricketer who played first-class and List A cricket for Leicestershire between 1953 and 1971. He continued in cricket after his playing days were over by standing as an umpire in first-class, List A and one-day international matches between 1972 and 2001. He was born at Cosby, Leicestershire.

In 2013, Kent County Cricket Club competed in Division Two of the County Championship, Group A of the 40-over Yorkshire Bank 40 and the South Group of the Friends Life t20. Kent also hosted a first-class match at the St Lawrence Ground against Cardiff MCCU at the start of the season and a T20 match against the touring New Zealanders in June. It was the second season in charge for head coach Jimmy Adams. The club captain was England spinner James Tredwell, taking over from Rob Key who had been club captain since 2006. Brendan Nash registered as a Kolpak player, ending his West Indies international career, which allowed Kent to sign another overseas player. South African fast bowler Vernon Philander filled this role, although he was only with the club for a short spell in July. Another new addition to the squad was 22-year-old Calum Haggett from Somerset. Shortly before the end of the season, Kent signed two young fast bowlers: Charlie Hartley and Matt Hunn. In addition, Mitchell Claydon joined on loan from Durham on 11 June initially for one month, but this was extended for a second month.

Stuart Gordon Whittingham is a Scottish cricketer who plays for Gloucestershire County Cricket Club as well as representing his country in One Day Internationals. Whittingham has also represented Loughborough MCC University, Sussex and the Scotland Under-19 cricket team. Primarily a right-arm fast-medium bowler, he also bats right handed.