Private placement (or non-public offering) is a funding round of securities which are sold not through a public offering, but rather through a private offering, mostly to a small number of chosen investors. Generally, these investors include friends and family, accredited investors, and institutional investors. [1]

Since private placements are not offered to the general public, they are prospectus exempt. Instead, they are issued through Offering Memorandum. Private placements come with a great deal of administration and are have normally been sold through financial institutions such as investment banks. New FinTech companies not offer an automated, online process making it easier to reach potential investors and reduce the administration.

Although these placements are subject to the Securities Act of 1933, the securities offered do not have to be registered with the Securities and Exchange Commission if the issuance of the securities conforms to an exemption from registrations as set forth in the Securities Act of 1933 and the associated SEC rules put into effect. [2] Most private placements are offered under the Rules known as Regulation D. Different rules under Regulation D provide stipulations for offering a Private Placement, such as required financial criteria for investors or solicitation allowances. [3] Private placements may typically consist of offers of common stock or preferred stock or other forms of membership interests, warrants or promissory notes (including convertible promissory notes), bonds, and purchasers are often institutional investors such as banks, insurance companies or pension funds. Common exemptions from the Securities Act of 1933 allow an unlimited number of accredited investors to purchase securities in an offering. Generally, accredited investors are those with a net worth in excess of $1 million or annual income exceeding $200,000 or $300,000 combined with a spouse. [4] Under these exemptions, no more than 35 non-accredited investors may participate in a private placement. [5] In most cases, all investors must have sufficient financial knowledge and experience to be capable of evaluating the risks and merits of investing in a company.

An Investment bank is a financial services company or corporate division that engages in advisory-based financial transactions on behalf of individuals, corporations, and governments. Traditionally associated with corporate finance, such a bank might assist in raising financial capital by underwriting or acting as the client's agent in the issuance of securities. An investment bank may also assist companies involved in mergers and acquisitions (M&A) and provide ancillary services such as market making, trading of derivatives and equity securities, and FICC services. Most investment banks maintain prime brokerage and asset management departments in conjunction with their investment research businesses. As an industry, it is broken up into the Bulge Bracket, Middle Market, and boutique market.

The Investment Company Act of 1940 is an act of Congress. It was passed as a United States Public Law on August 22, 1940, and is codified at 15 U.S.C. §§ 80a-1–80a-64. Along with the Securities Exchange Act of 1934 and Investment Advisers Act of 1940, and extensive rules issued by the Securities and Exchange Commission, it forms the backbone of United States financial regulation. It has been updated by the Dodd-Frank Act of 2010. Often referenced as the Investment Company Act, the 1940 Act or simply the '40 Act, it is the primary source of regulation for mutual funds and closed-end funds, an investment industry now in the many trillions of dollars. In addition, the '40 Act impacts the operations of hedge funds, private equity funds and even holding companies.

The secondary market, also called the aftermarket and follow on public offering is the financial market in which previously issued financial instruments such as stock, bonds, options, and futures are bought and sold. Another frequent usage of "secondary market" is to refer to loans which are sold by a mortgage bank to investors such as Fannie Mae and Freddie Mac. 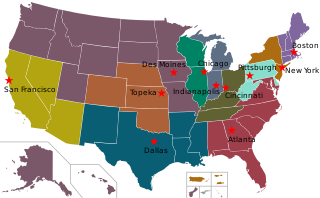 The Federal Home Loan Banks are 11 U.S. government-sponsored banks that provide reliable liquidity to member financial institutions to support housing finance and community investment. With their members, the FHLBanks represents the largest collective source of home mortgage and community credit in the United States.

A private investment in public equity, often called a PIPE deal, involves the selling of publicly traded common shares or some form of preferred stock or convertible security to private investors. It is an allocation of shares in a public company not through a public offering in a stock exchange. PIPE deals are part of the primary market. In the U.S., a PIPE offering may be registered with the Securities and Exchange Commission on a registration statement or may be completed as an unregistered private placement.

A qualified institutional buyer (QIB), in United States law and finance, is a purchaser of securities that is deemed financially sophisticated and is legally recognized by securities market regulators to need less protection from issuers than most public investors. Typically, the qualifications for this designation are based on an investor's total assets under management and specific legal conditions in the country where the fund is located. Rule 144A requires an institution to manage at least $100 million in securities from issuers not affiliated with the institution to be considered a QIB. If the institution is a bank or savings and loans thrift they must have a net worth of at least $25 million. If the institution is a registered dealer acting for its own account it must in the aggregate own and invest on a discretionary basis at least $10 million of securities of issuers not affiliated with the dealer.

Rule 144A. Securities Act of 1933, as amended provides a safe harbor from the registration requirements of the Securities Act of 1933 for certain private resales of minimum $500,000 units of restricted securities to qualified institutional buyers (QIBs), which generally are large institutional investors that own at least $100 million in investable assets. When a broker or dealer is selling securities in reliance on Rule 144A, it may make offers to non-QIBs through general solicitations following an amendment to the Rule in 2012.

A Direct Public Offering (DPO) is a method by which a business can offer an investment opportunity directly to the public.

The Dodd–Frank Wall Street Reform and Consumer Protection Act is a United States federal law that was enacted on July 21, 2010. The law overhauled financial regulation in the aftermath of the financial crisis of 2007–2008, and it made changes affecting all federal financial regulatory agencies and almost every part of the nation's financial services industry.

Form D is an SEC filing form to be used to file a notice of an exempt offering of securities under Regulation D of the U.S. Securities and Exchange Commission. Commission rules require the notice to be filed by companies and funds that have sold securities without registration under the Securities Act of 1933 in an offering based on a claim of exemption under Rule 504, 505 or 506 of Regulation D or Section 4(6) of that statute. Commission rules further require the notice to be filed within 15 days after the first sale of securities in the offering. For this purpose, the date of first sale is the date on which the first investor is irrevocably contractually committed to invest. If the due date falls on a Saturday, Sunday or holiday, it is moved to the next business day.

The Jumpstart Our Business Startups Act, or JOBS Act, is a law intended to encourage funding of small businesses in the United States by easing many of the country's securities regulations. It passed with bipartisan support, and was signed into law by President Barack Obama on April 5, 2012. Title III, also known as the CROWDFUND Act, has drawn the most public attention because it creates a way for companies to use crowdfunding to issue securities, something that was not previously permitted. Title II went into effect on September 23, 2013. On October 30, 2015, the SEC adopted final rules allowing Title III equity crowdfunding. These rules went into effect on May 16, 2016. Other titles of the Act had previously become effective in the years since the Act's passage.

In the United States under the Securities Act of 1933, any offer to sell securities must either be registered with the United States Securities and Exchange Commission (SEC) or meet certain qualifications to exempt it from such registration. Regulation A contains rules providing exemptions from the registration requirements, allowing some companies to use equity crowdfunding to offer and sell their securities without having to register the securities with the SEC. Regulation A offerings are intended to make access to capital possible for small and medium-sized companies that could not otherwise bear the costs of a normal SEC registration and to allow nonaccredited investors to participate in the offering. The regulation is found under Title 17 of the Code of Federal Regulations, chapter 2, part 230. The legal citation is 17 C.F.R. §230.251 et seq.