Senior debt is often secured by collateral on which the lender has put in place a first lien. Usually this covers all the assets of a corporation and is often used for revolving credit lines.[ citation needed ] It is the debt that has priority for repayment in a liquidation.[ citation needed ]

It is a class of corporate debt that has priority with respect to interest and principal over other classes of debt and over all classes of equity by the same issuer.[ citation needed ]

Senior lenders are theoretically (and usually) in the best position because they have first claim to unsecured assets.[ citation needed ]

However, in various jurisdictions and circumstances, nominally "senior" debt may not rank pari passu with all other senior obligations.[ citation needed ] For example, in the 2008 Washington Mutual Bank seizure, all assets and most of Washington Mutual Bank's liabilities (including deposits, covered bonds, and other secured debt) were assumed by JPMorgan Chase.[ citation needed ] However other debt claims, including unsecured senior debt, were not. [2] By doing this, the Federal Deposit Insurance Corporation (FDIC) effectively subordinated the unsecured senior debt to depositors, thereby fully protecting depositors while also eliminating any potential deposit insurance liability to the FDIC itself.[ citation needed ] In this and similar cases, specific regulatory and oversight powers can lead to senior lenders being subordinated in potentially unexpected ways.

Additionally, in US Chapter 11 bankruptcies, new lenders can come in to fund the continuing operation of companies and be granted status super-senior to other (even senior secured) lenders, so-called "debtor in possession" status.[ citation needed ] Similar regimes exist in other jurisdictions.[ citation needed ]

A senior lender to a holding company is in fact subordinated to any lenders (senior or otherwise) at a subsidiary with respect to access to the subsidiary's assets in a bankruptcy.[ citation needed ] The collapse of Washington Mutual bank in 2008 highlighted this priority of claim, as lenders to Washington Mutual, Inc. received no benefit from the assets of that entity's bank subsidiaries. [3]

The Federal Deposit Insurance Corporation (FDIC) is one of two agencies that provide deposit insurance to depositors in American depository institutions, the other being the National Credit Union Administration, which regulates and insures credit unions. The FDIC is a United States government corporation providing deposit insurance to depositors in American commercial banks and savings banks. The FDIC was created by the 1933 Banking Act, enacted during the Great Depression to restore trust in the American banking system. More than one-third of banks failed in the years before the FDIC's creation, and bank runs were common. The insurance limit was initially US$2,500 per ownership category, and this was increased several times over the years. Since the passage of the Dodd–Frank Wall Street Reform and Consumer Protection Act in 2011, the FDIC insures deposits in member banks up to US$250,000 per ownership category. FDIC insurance is backed by the full faith and credit of the government of the United States of America, since its inception in 1933 no depositor has ever lost a penny of FDIC-insured funds. 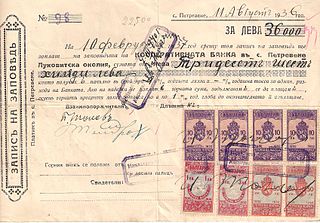 A savings and loan association (S&L), or thrift institution, is a financial institution that specializes in accepting savings deposits and making mortgage and other loans. The terms "S&L" or "thrift" are mainly used in the United States; similar institutions in the United Kingdom, Ireland and some Commonwealth countries include building societies and trustee savings banks. They are often mutually held, meaning that the depositors and borrowers are members with voting rights, and have the ability to direct the financial and managerial goals of the organization like the members of a credit union or the policyholders of a mutual insurance company. While it is possible for an S&L to be a joint-stock company, and even publicly traded, in such instances it is no longer truly a mutual association, and depositors and borrowers no longer have membership rights and managerial control. By law, thrifts can have no more than 20 percent of their lending in commercial loans—their focus on mortgage and consumer loans makes them particularly vulnerable to housing downturns such as the deep one the U.S. experienced in 2007.

In finance, mezzanine capital is any subordinated debt or preferred equity instrument that represents a claim on a company's assets which is senior only to that of the common shares. Mezzanine financings can be structured either as debt or preferred stock.

A bailout is the provision of financial help to a corporation or country which otherwise would be on the brink of failure bankruptcy.

A secured loan is a loan in which the borrower pledges some asset as collateral for the loan, which then becomes a secured debt owed to the creditor who gives the loan. The debt is thus secured against the collateral, and if the borrower defaults, the creditor takes possession of the asset used as collateral and may sell it to regain some or all of the amount originally loaned to the borrower. An example is the foreclosure of a home. From the creditor's perspective, that is a category of debt in which a lender has been granted a portion of the bundle of rights to specified property. If the sale of the collateral does not raise enough money to pay off the debt, the creditor can often obtain a deficiency judgment against the borrower for the remaining amount.

Subordination in banking and finance refers to the order of priorities in claims for ownership or interest in various assets.

In finance, subordinated debt is debt which ranks after other debts if a company falls into liquidation or bankruptcy.

In financial economics, a liquidity crisis refers to an acute shortage of liquidity. Liquidity may refer to market liquidity, funding liquidity, or accounting liquidity. Additionally, some economists define a market to be liquid if it can absorb "liquidity trades" without large changes in price. This shortage of liquidity could reflect a fall in asset prices below their long run fundamental price, deterioration in external financing conditions, reduction in the number of market participants, or simply difficulty in trading assets.

A bank failure occurs when a bank is unable to meet its obligations to its depositors or other creditors because it has become insolvent or too illiquid to meet its liabilities. A bank usually fails economically when the market value of its assets declines to a value that is less than the market value of its liabilities. The insolvent bank either borrows from other solvent banks or sells its assets at a lower price than its market value to generate liquid money to pay its depositors on demand. The inability of the solvent banks to lend liquid money to the insolvent bank creates a bank panic among the depositors as more depositors try to take out cash deposits from the bank. As such, the bank is unable to fulfill the demands of all of its depositors on time. A bank may be taken over by the regulating government agency if its shareholders' equity are below the regulatory minimum.

On March 23, 2009, the United States Federal Deposit Insurance Corporation (FDIC), the Federal Reserve, and the United States Treasury Department announced the Public–Private Investment Program for Legacy Assets. The program is designed to provide liquidity for so-called "toxic assets" on the balance sheets of financial institutions. This program is one of the initiatives coming out of the implementation of the Troubled Asset Relief Program (TARP) as implemented by the U.S. Treasury under Secretary Timothy Geithner. The major stock market indexes in the United States rallied on the day of the announcement rising by over six percent with the shares of bank stocks leading the way. As of early June 2009, the program had not been implemented yet and was considered delayed. Yet, the Legacy Securities Program implemented by the Federal Reserve has begun by fall 2009 and the Legacy Loans Program is being tested by the FDIC. The proposed size of the program has been drastically reduced relative to its proposed size when it was rolled out.

Securitization is the financial practice of pooling various types of contractual debt such as residential mortgages, commercial mortgages, auto loans or credit card debt obligations and selling their related cash flows to third party investors as securities, which may be described as bonds, pass-through securities, or collateralized debt obligations (CDOs). Investors are repaid from the principal and interest cash flows collected from the underlying debt and redistributed through the capital structure of the new financing. Securities backed by mortgage receivables are called mortgage-backed securities (MBS), while those backed by other types of receivables are asset-backed securities (ABS).