Psych-Out is a 1968 counterculture-era psychedelic film about hippies, psychedelic music and recreational drugs starring Susan Strasberg, Jack Nicholson (the film's leading man despite being billed under supporting player Dean Stockwell) and Bruce Dern. It was produced and released by American International Pictures. The cinematographer was László Kovács.

Jenny is a deaf runaway who arrives in San Francisco's Haight-Ashbury district searching for her brother Steve. She encounters Stoney and his hippie band Mumblin' Jim in a coffee shop. The boys are sympathetic, especially when they discover that she is deaf and uses lip reading. They hide her from the police and help her look for her brother. She has a postcard from her brother that reads "Jess Saes: God is alive and well and living in a sugar cube". Sugar cubes were often used as a method of creating individual doses of LSD. The band is approached by a promoter who arranges for them to perform at a place called the Ballroom.

Artist Warren, who designs the psychedelic posters advertising the band, freaks out badly in his gallery, apparently on STP. He sees everyone, including himself, as walking dead, and his own hand as festering, and he tries to cut it off with a circular saw. While helping him, Jenny notices a large sculpture resembling abstract flames in a corner and recognizes it as her brother's work. The gallery owner says the artist is known as "The Seeker", an itinerant preacher. Ex-band member Dave may know The Seeker's current whereabouts.

Dave left the band because he felt that they were too concerned with worldly success, rather than the music itself. His information leads the gang to a junkyard. Nearby is a sign reading "Jess Saes" -- "Jesus Saves", with some letters missing. The "sugar cube" slogan is painted on the side of a car that Jenny recognizes as her brother's. However, a group of thugs who frequent the junkyard accost the group. They dislike The Seeker's street preaching and his themes of love and peace. They threaten to rape Jenny. Violence ensues, and the group barely escape with their lives.

Jenny's friendship with Stoney has become sexual. She does not know his reputation for one-night stands and lack of commitment. She attends a mock funeral staged by a large group of hippies, with background music by the Seeds; the theme of their play is that death is not the end, and that love and a refusal to hurt others are what keep us alive. In Stoney's crowded home, everyday hippie life is less than ideal. The residents are all involved in contemplation, sex, sleeping, dancing or decorating, but little cleaning or maintenance. Jenny tries to wash the mountain of dishes in the kitchen and finds that the plumbing is broken, but everybody just continues dancing. Frustrated, she interrupts Stoney's band practice to inform him that she is going to take a walk. Stoney later goes to find her and ends up at the art gallery, where he hears breaking glass and slips inside.

The Seeker has returned to the art gallery to pick up his sculpture. Challenged by Stoney, he pleads that the work should not be touched; it is actually not art, but a shrine that he created on God's request. He is glad that Jenny is looking for him, but says he is on drugs and wants to be sober when they meet. Jenny's deafness is pathological; their mother was cruelly abusive and burned Jenny's beloved toys. Jenny was violently traumatized and apparently had a stroke; she was deaf from that moment.

The performance at the Ballroom is a success; Mumblin' Jim play, along with the Strawberry Alarm Clock. The Seeker shows up, hoping to see Jenny, but the junkyard thugs are also present and chase him back to his home. At an after-show party, Dave remonstrates Stoney over his ambition for commercial success, as well as his cavalier treatment of Jenny. Dave consoles Jenny and puts STP in some fruit juice. He offers himself to her, but Stoney charges in and angrily shouts at Jenny, calling her a "bitch". Heartbroken, Jenny accepts Dave's glass of fruit juice and drinks nearly all of it.

Jenny again explains her search for Steve, and Dave pulls a note from his pocket that reads "God is in the flame" and contains an address. Jenny runs out and takes a streetcar. Stoney rouses Dave, now tripping on STP, to help find her. Pursued by the junkyard thugs back to his home, Steve lights a fire inside his shrine. Soon the entire house is ablaze. Jenny arrives to find a crowd gathering near the house; she runs in just in time to see him standing in the middle of the flames, absorbed in prayer; he sees her, but merely smiles and waves.

In her grief and confusion, she runs up to the roof, hallucinating wildly. She apparently jumps into a reservoir. She then sees fire bombs heading towards her, barely missing her. She is standing at the middle of the Golden Gate Bridge, cars coming at her from both directions with horns blaring. She holds her hands over her ears, and Dave and Stoney find her. Dave shoves her out of the way of an oncoming car and is struck and killed. As he dies, he murmurs that he hopes this, too, will be a good trip. Sickened and angry, Jenny tries to leave, but Stoney embraces her. The film ends with the two holding each other and crying, while an image of the mock funeral reappears.

Dick Clark, who produced the film, wrote in his memoirs that he insisted that the film have an anti-drug message "... because I'd seen the kids in the hippie commune living in awful squalor." [2] He wrote in 1976, "... if you saw it [the film] today you'd say it was a reasonably accurate account of what was going on then." [2]

The film was originally titled The Love Children, but was changed at the request of distributors who worried that audiences might think it was "a film about bastards." Producer Samuel Z. Arkoff came up with the new title of Psych-Out based on a recent successful reissue of Psycho . [2]

Director Richard Rush's cut came in at 101 minutes and was edited to 82 minutes by the producers, a version that would be released on DVD by Fox Video in 2003. HBO Video's VHS release used a 98-minute version. On February 17, 2015, a 101-minute director's cut was released on DVD and Blu-ray.

A hippie is a member of the counterculture of the 1960s, originally a youth movement that began in the United States during the mid-1960s and spread to other countries around the world. The word hippie came from hipster and was used to describe beatniks who moved into New York City's Greenwich Village, San Francisco's Haight-Ashbury district, and Chicago's Old Town community. The term hippie was used in print by San Francisco writer Michael Fallon, helping popularise use of the term in the media, although the tag was seen elsewhere earlier.

Psychedelic folk is a loosely defined form of psychedelia that originated in the 1960s. It retains the largely acoustic instrumentation of folk, but adds musical elements common to psychedelic music.

Encino Man is a 1992 American comedy film directed by Les Mayfield in his directorial debut, and starring Brendan Fraser, Sean Astin, and Pauly Shore. The plot revolves around two geeky teenagers from Encino, Los Angeles, California, played by Astin and Shore, who discover a caveman in Morgan's backyard, frozen in a block of ice. 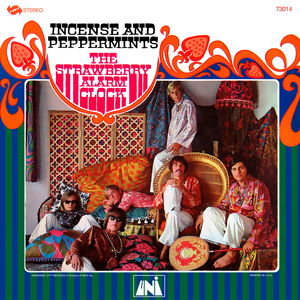 Incense and Peppermints is the debut album by psychedelic rock band Strawberry Alarm Clock. Released in October 1967, the album reached No. 11 on the Billboard 200 album charts and included the band's No. 1 Billboard Hot 100 hit "Incense and Peppermints". In addition to the six official members of the band, the album also featured the flute playing of Steve Bartek, who co-wrote four songs on the album with bass player George Bunnell.

The Cube is an hour-long teleplay that aired on NBC's weekly anthology television show NBC Experiment in Television in 1969. The production was produced and directed by puppeteer and filmmaker Jim Henson, and was one of several experiments with the live-action film medium which he conducted in the 1960s, before focusing entirely on The Muppets and other puppet works. The screenplay was co-written by long-time Muppet writer Jerry Juhl. In the previous year, Henson had produced a documentary for NBC Experiment in Television, "Youth '68". 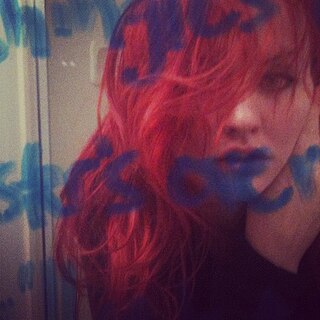 Linda Strawberry is the American artist, director, editor and musician, best known as Billy Corgan's creative partner, and Creative Director for Smashing Pumpkins, including Shiny And Oh So Bright Tour in 2018.

Haré Rama Haré Krishna is a 1971 Indian musical drama film directed by Dev Anand starring himself, Mumtaz and Zeenat Aman. The film was a hit and a star-making vehicle for Zeenat Aman, who played a westernized hippie, and won the Filmfare Best Supporting Actress Award, as well as the BFJA Award for Best Actress. The movie dealt with the decadence of the Hippie culture. It aimed to have an anti-drug message and also depicts some problems associated with Westernization such as divorce. It was influenced by the 1968 American psychedelic film Psych-Out. 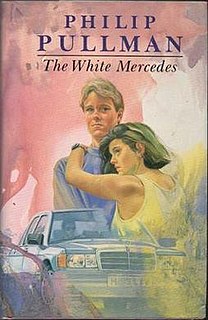 The White Mercedes, published in 1992 and now known as The Butterfly Tattoo, is about one character who falls passionately in love, and suffers horribly from then on, as his innocent love is embroiled in a long cycle of revenge and hatred. It was Philip Pullman's first book for younger audiences, which won him critical acclaim from many sources.

The hippie subculture began its development as a youth movement in the United States during the early 1960s and then developed around the world.

The Urges are a psychedelic garage rock music group from Dublin, Ireland.

"Turn on, tune in, drop out" is a counterculture-era phrase popularized by Timothy Leary in 1966. In 1967, Leary spoke at the Human Be-In, a gathering of 30,000 hippies in Golden Gate Park in San Francisco and phrased the famous words, "Turn on, tune in, drop out". It was also the title of his spoken word album recorded in 1966. On this lengthy album, Leary can be heard speaking in a monotone soft voice on his views about the world and humanity, describing nature, Indian symbols, "the meaning of inner life", the LSD experience, peace, and many other issues.

The Love-Ins is a 1967 American comedy-drama musical film about LSD that was directed by Arthur Dreifuss. 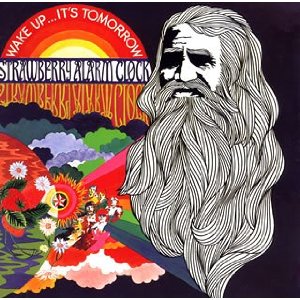 Wake Up...It's Tomorrow is the second album by the American psychedelic rock band Strawberry Alarm Clock, released by Uni Records in 1968. It came as the group was challenged with continuing the success of their debut single, the psychedelic classic and number one hit, "Incense and Peppermints" and the LP that followed. Their second effort would expand upon the arrangements of its predecessor's unique blend of vocal harmonies, psychedelia, and pop music. In addition, the band's atypical lineup, which featured two bassists, would be altered to address studio and performing issues.

The Borrowers is a 2011 British television film starring Stephen Fry, Christopher Eccleston and Victoria Wood, based broadly on Mary Norton's 1952 novel The Borrowers.

The Tale is a 2018 American drama film written and directed by Jennifer Fox and starring Laura Dern, Ellen Burstyn, Jason Ritter, Elizabeth Debicki, Isabelle Nélisse, Common, Frances Conroy, and John Heard. It tells the story about Fox's own childhood sexual abuse and her coming to terms with it in her later life. It premiered at the 2018 Sundance Film Festival and aired on HBO on May 26, 2018.