Randy Myers grew up in Vancouver,Washington. His father was an auto mechanic and a machinist. [1] He is a graduate of Evergreen High School and Clark College. Myers was drafted in the first round (ninth overall) of the 1982 amateur draft. [2]

Myers began his Major League career with the New York Mets in 1985 under the management of Davey Johnson,and was a member of the Mets 1986 World Series-winning team (although he did not appear on the Mets' postseason roster then,he was given a belated World Series ring nine years later in 1995 [3] ). Myers became a closer in 1988 as he platooned with Roger McDowell after Jesse Orosco left for the Los Angeles Dodgers.

Myers was traded to the Reds in 1990 for closer John Franco,and became one of the league's elite closers and the most successful member of the Nasty Boys trio,which also included Rob Dibble and Norm Charlton,while being selected as an All-Star in 1990. In 1990,Myers won his second World Series ring as the Reds swept the Oakland Athletics. In 1991,the Reds experimented with Myers as a starter,a move that proved highly unsuccessful as he posted a record of 6 wins and 13 losses. [2]

In 1992,Myers became the closer for the Padres. After only one season in San Diego,Myers was a Cub in 1993 where he posted his best statistical season with a then National League record 53 saves. In a September 28,1995 game vs. the Astros,Myers was attacked on the field by a fan named John Murray at Wrigley Field after giving up a two-run,eighth inning home run to James Mouton that put the Astros up 9–7. Fearing that Murray was armed,Myers used his martial arts training to bring Murray to the ground,then held him down until security guards could get him. The Cubs rallied to win 12–11 in 10 innings. [4] [5] In 1994 and 1995,Myers earned his second and third All-Star selections. After the 1995 season,Myers became a member of the Orioles where he had two more solid seasons,highlighted by an All-Star selection in 1997,when he saved 45 games. Myers had 28 saves for the Blue Jays in his final season,1998,before being traded back to the Padres after being claimed on waivers. Though he was under contract for both 1999 and 2000,he did not pitch in the Major Leagues after 1998.

In 2000,Myers earned a salary of US$6,916,667.00 while unable to pitch due to a damaged shoulder. Most of his 1999 and 2000 seasons were spent receiving treatment after undergoing rotator cuff surgery in 1999;his injury resulted in a legal dispute between the Padres and their insurance carrier after the carrier denied an $8 million claim due to Myers' inability to play. [6]

The Padres' 1998 waiver claim of Myers is considered one of the biggest blunders in the history of the waiver wire. The Padres did not want Myers,mostly because of the $12 million and two additional years remaining on his contract as well as the fact that they already had an established closer in Trevor Hoffman,but placed a waiver claim in order to prevent him from going to the rival Atlanta Braves. They expected the Blue Jays to rescind their waiver claim,but the Blue Jays instead allowed the waiver claim to go through,leaving them responsible for the rest of his contract. [7]

For many years during his pro baseball career he assisted in coaching the women's basketball team at his alma mater,Clark Community College. He is widely involved in charities in Vancouver through his Randy Myers Foundation. He also has a lifelong involvement in martial arts. [1]

Clark College did not field a baseball team after the 1992 season,but by 2011,thanks in large part of Myers' efforts fundraising and spearheading the program's revival,Clark again started playing baseball in 2011. [9] 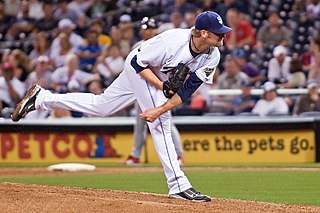 Sean Michael Henn is an American former professional baseball pitcher. Henn attended McLennan Community College in Texas, and was drafted in the 26th round in 2000 by the New York Yankees. He played in Major League Baseball (MLB) for the Yankees, San Diego Padres, Minnesota Twins, Baltimore Orioles and New York Mets. He also played in the KBO League for the Hanwha Eagles.

John David Weathers is a former Major League Baseball pitcher. He was a part of the New York Yankees' 1996 World Series championship over the Atlanta Braves. He bats and throws right-handed.

Robert Lane "Bob" Miller was an American professional baseball player. He played in Major League Baseball as a right-handed pitcher from 1957 to 1974. Miller played for three World Series champions: the 1963 Los Angeles Dodgers, 1965 Los Angeles Dodgers and the 1971 Pittsburgh Pirates—five league champions and four division winners, as well as for four teams that lost 100 or more games in a season.

Roy Lee Jackson is a former Major League Baseball pitcher likely best remembered for his stint with the Toronto Blue Jays in the early 80s.

The 1998 Major League Baseball season ended with the New York Yankees sweeping the San Diego Padres in the World Series, after they had won a then AL record 114 regular season games. The Yankees finished with 125 wins for the season, which remains the MLB record.

Galen Bernard Cisco is an American former baseball player and coach. He was a pitcher in Major League Baseball for three different teams between 1961 and 1969. Listed at 6 feet (1.8 m) tall and 200 pounds (91 kg), Cisco batted and threw right-handed. He was signed by the Boston Red Sox in 1958 out of Ohio State University. 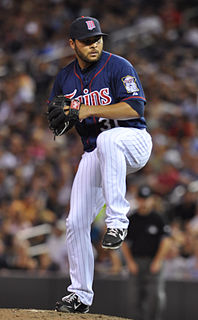 Alex James Burnett is an American former professional baseball right-handed relief pitcher. He is 6 feet 0 inches (1.83 m) tall and weighs 215 pounds (98 kg). He was drafted in the 12th round of the 2005 Major League Baseball draft by the Minnesota Twins.

Brad Brach is an American professional baseball pitcher who is a free agent. He previously played in MLB for the San Diego Padres, Baltimore Orioles, Atlanta Braves, Chicago Cubs, New York Mets, and Cincinnati Reds. Brach was an All-Star in 2016.

The 2012 Chicago Cubs season was the 141st season of the Chicago Cubs franchise, the 137th in the National League and the 97th at Wrigley Field. The Cubs finished fifth in the NL Central with a record of 61–101, their worst record since 1966. The Cubs began the season at home on April 5, 2012 against the Washington Nationals and finished the season at home on October 3 against the Houston Astros. 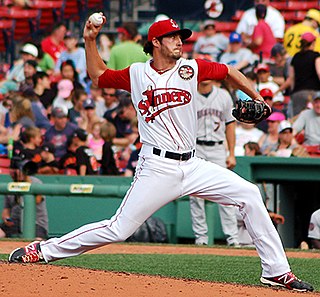 James Chandler Shepherd is an American professional baseball pitcher for the Minnesota Twins organization. He made his Major League Baseball (MLB) debut with the Orioles in 2019.

Andrew Walker Lockett is an American professional baseball pitcher for the Doosan Bears of the KBO League. He previously played in Major League Baseball (MLB) for the San Diego Padres, New York Mets and Seattle Mariners.

John Francis Andreoli is an American professional baseball outfielder for the San Diego Padres organization. He previously played in Major League Baseball (MLB) for the Seattle Mariners and Baltimore Orioles. He also played for the Italian national baseball team in the 2017 World Baseball Classic and at the 2019 European Baseball Championship.