Last updated November 12, 2021
Group of pitchers with 300 or more regular-season saves in their careers

In Major League Baseball (MLB), the 300 save club is the group of pitchers who have recorded 300 or more regular-season saves in their careers. [1] [2] [3] [4] Most commonly a relief pitcher ("reliever" or "closer") earns a save by being the final pitcher of a game in which his team is winning by three or fewer runs and pitching at least one inning without losing the lead. The final pitcher of a game can earn a save by getting at least one batter out to end the game with the winning run on base, at bat, or on deck, or by pitching the last three innings without relinquishing the lead, regardless of score. [5] The statistic was created by Jerome Holtzman in 1959 to "measure the effectiveness of relief pitchers" and was adopted as an official statistic by MLB in 1969. [6] [7] The save has been retroactively measured for past pitchers where applicable. Hoyt Wilhelm retired in 1972 and recorded just 31 saves from 1969 onwards, for example, but holds 228 total career saves. [8]

Mariano Rivera holds the MLB save record with 652. Only Rivera and Trevor Hoffman have exceeded 500 or 600 saves, and Hoffman was the first to achieve either. Rivera, Hoffman, Lee Smith, Francisco Rodríguez, John Franco, and Billy Wagner are the only pitchers to have recorded 400 or more saves. Rollie Fingers was the first player to record 300 saves, reaching the mark on August 21, 1982. Aroldis Chapman is the most recent, achieving his 300th on August 26, 2021. In total, 31 players have recorded 300 or more saves in their career. Only eight relievers – Dennis Eckersley, Fingers, Goose Gossage, Hoffman, Rivera, Smith, Bruce Sutter, and Wilhelm – have been inducted into the Baseball Hall of Fame; [9] all but Wilhelm also have at least 300 saves. [10] Craig Kimbrel, Kenley Jansen, and Chapman are the only active players with more than 300 saves, and Kimbrel is the active leader with 371. [11] 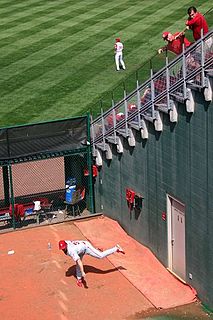 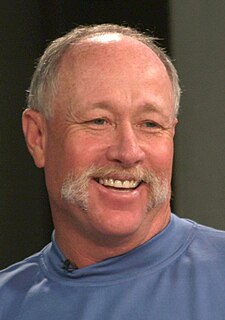 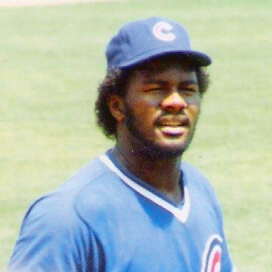 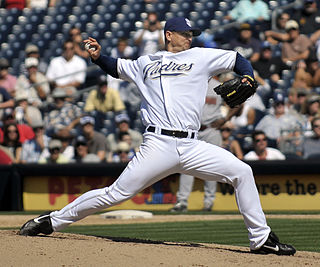 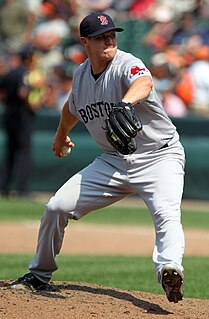 Jonathan Robert Papelbon is an American former professional baseball relief pitcher. He played 12 seasons in Major League Baseball (MLB), most notably for the Boston Red Sox, with whom he was an All-Star in four consecutive seasons (2006–2009), won the 2007 Delivery Man of the Year Award, and was a 2007 World Series champion. The Red Sox drafted him in the 4th round of the 2003 Major League Baseball Draft, and he played three seasons of minor league baseball before breaking into the majors. He also played for the Philadelphia Phillies from 2012 to 2015, and the Washington Nationals from 2015 to 2016. 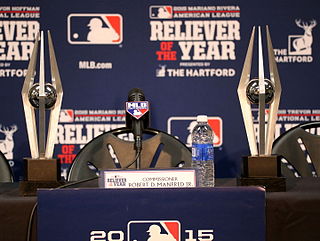 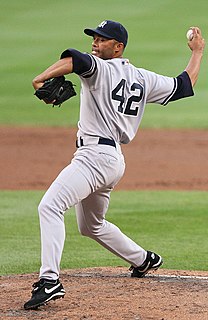 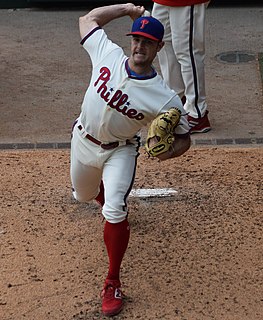 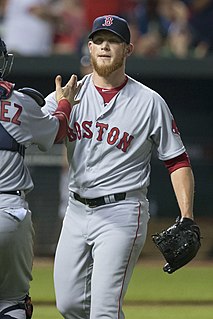 Craig Michael Kimbrel is an American professional baseball pitcher for the Chicago White Sox of Major League Baseball (MLB). He previously played for the San Diego Padres, Boston Red Sox, Atlanta Braves, and Chicago Cubs. He is an eight-time All-Star, two-time Reliever of the Year, and a 2018 World Series champion. He is known for his triple-digit fastball, as well as his unique pre-pitch stare. Listed at 6 feet 0 inches (1.83 m) and 210 pounds (95 kg), he both throws and bats right-handed. 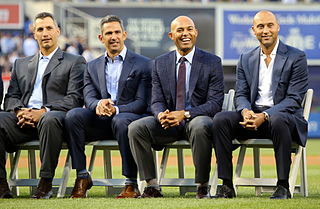 Major League Baseball (MLB) annually honored its best relief pitcher with the Major League Baseball Delivery Man of the Year Award from 2005 through 2013. It was initially part of a sponsorship agreement between MLB and package delivery company DHL Express; DHL's sponsorship ran from 2005 to 2010. There was also a Delivery Man of the Month Award. From its inception in 2005 through 2008, the award was given to a single reliever who was selected online by fans from a group of 10 finalists chosen by an MLB panel. The panel took sole responsibility to select the annual winner starting in 2009.

The Rolaids Relief Man Award was an annual Major League Baseball (MLB) award given from 1976 to 2012 to the top relief pitchers of the regular season, one in the American League (AL) and one in the National League (NL). Relief pitchers enter the game after the starting pitcher is removed. The award was sponsored by the antacid brand Rolaids, whose slogan was "R-O-L-A-I-D-S spells relief." Because the first closers were nicknamed "firemen", a reference to "putting out the fire" of another team's rally, the trophy was a gold-plated firefighter's helmet. Unlike other awards, such as the Cy Young Award or the MLB Most Valuable Player (MVP) Award, the Relief Man was based on statistical performance, rather than votes. Each save was worth three points; each win was worth two points; and each loss was worth negative two points. Beginning with the 1988 MLB season, negative two points were given for blown saves. In the 2000 MLB season, the term "tough save", which was worth an additional point, was introduced by Rolaids. A "tough save" happened when a relief pitcher entered the game already having the potential tying run on base, and got the save. The player with the highest point total won the award.

Major League Baseball (MLB) honors its best relief pitchers with a Reliever of the Month Award for one pitcher in the American League (AL) and one in the National League (NL) during each month of the regular season. These awards have been issued since 2017. From 2005 to 2013, MLB honored a single relief pitcher across both leagues with the Delivery Man of the Month Award during each month of the regular season.

Major League Baseball (MLB) honored its best relief pitchers with a Delivery Man of the Month Award for one pitcher during each month of the regular season from 2005 through 2013. The awards were initially part of a sponsorship agreement between MLB and package delivery company DHL Express; DHL's sponsorship ran from 2005 to 2010. There was also a Delivery Man of the Year Award; all of the Delivery Man awards were discontinued after 2013. A new Reliever of the Month Award was first awarded in 2017.