The Research Institute for Fragrance Materials, Inc. (RIFM) is the international scientific authority for the safe use of fragrance materials. RIFM generates, evaluates and distributes scientific data on the safety assessment of fragrance raw materials found in personal and household care products. Through extensive research, testing and constant monitoring of all scientific literature available, RIFM maintains its Database as the most comprehensive source worldwide of physical-chemical, toxicological and eco-toxicological data associated with known fragrance and flavour materials. All of RIFM’s scientific findings are evaluated by an independent Expert Panel—an international group of dermatologists, pathologists, toxicologists, reproduction, respiratory and environmental scientists. The Expert Panel evaluates the safety of fragrance ingredients under conditions of intended use and publishes their results in peer-reviewed scientific journals. The decisions of the Expert Panel regarding restrictions of use are also published in the International Fragrance Association (IFRA) Standards. 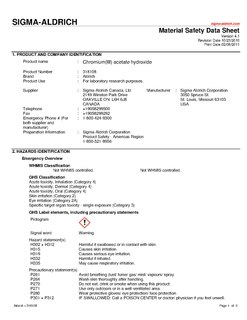 A safety data sheet (SDS), material safety data sheet (MSDS), or product safety data sheet (PSDS) are documents that list information relating to occupational safety and health for the use of various substances and products. SDSs are a widely used system for cataloguing information on chemicals, chemical compounds, and chemical mixtures. SDS information may include instructions for the safe use and potential hazards associated with a particular material or product, along with spill-handling procedures. The older MSDS formats could vary from source to source within a country depending on national requirements; however, the newer SDS format is internationally standardized.

Occupational hygiene is the anticipation, recognition, evaluation, control, and confirmation of protection from hazards at work that may result in injury, illness, or affect the well being of workers. These hazards or stressors are typically divided into the categories biological, chemical, physical, ergonomic and psychosocial. The risk of a health effect from a given stressor is a function of the hazard multiplied by the exposure to the individual or group. For chemicals, the hazard can be understood by the dose response profile most often based on toxicological studies or models. Occupational hygienists work closely with toxicologists for understanding chemical hazards, physicists for physical hazards, and physicians and microbiologists for biological hazards Environmental and occupational hygienists are considered experts in exposure science and exposure risk management. Depending on an individual's type of job, a hygienist will apply their exposure science expertise for the protection of workers, consumers and/or communities. 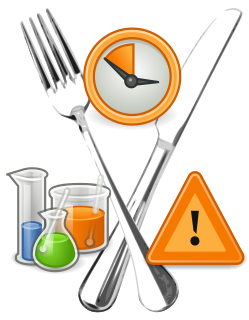 Generally recognized as safe (GRAS) is a United States Food and Drug Administration (FDA) designation that a chemical or substance added to food is considered safe by experts, and so is exempted from the usual Federal Food, Drug, and Cosmetic Act (FFDCA) food additive tolerance requirements. The concept of food additives being "generally recognized as safe" was first described in the Food Additives Amendment of 1958, and all additives introduced after this time had to be evaluated by new standards. 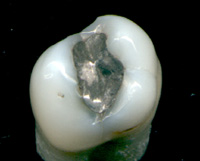 This discussion of the dental amalgam controversy outlines the debate over whether dental amalgam should be used. Supporters claim that it is safe, effective and long-lasting while critics argue that claims have been made since the 1840s that amalgam is unsafe because it may cause mercury poisoning and other toxicity.

The International Agency for Research on Cancer is an intergovernmental agency forming part of the World Health Organization of the United Nations. Its role is to conduct and coordinate research into the causes of cancer. It also collects and publishes surveillance data regarding the occurrence of cancer worldwide.

The artificial sweetener aspartame has been the subject of several controversies since its initial approval by the U.S. Food and Drug Administration (FDA) in 1974. The FDA approval of aspartame was highly contested, beginning with suspicions of its involvement in brain cancer, alleging that the quality of the initial research supporting its safety was inadequate and flawed, and that conflicts of interest marred the 1981 approval of aspartame, previously evaluated by two FDA panels that concluded to keep the approval on hold before further investigation. In 1987, the U.S. Government Accountability Office concluded that the food additive approval process had been followed properly for aspartame. The irregularities fueled a conspiracy theory, which the "Nancy Markle" email hoax circulated, along with claims—counter to the weight of medical evidence—that numerous health conditions are caused by the consumption of aspartame in normal doses.

The Interagency Coordinating Committee on the Validation of Alternative Methods (ICCVAM) coordinates U.S. federal government evaluation of new, revised, and alternative test methods. Alternative methods are methods for safety testing of chemicals and chemical products that use fewer or no animals or that minimize or prevent animal pain and distress.

Wang Aiping is a Chinese pharmacologist and toxicologist. For over 20 years, Wang has been researcher in drug and toxicity testing and has experience in new drug development. Since 2001, he has been Director of Drug Safety Evaluation and Research at the Academy of Medical Sciences, Peking Union Medical College and was also made General Manager of Technological development at Peking Union Medical College's Jianhao Pharmaceutical Technology Development Co., Ltd.

Galaxolide is a synthetic musk with a clean sweet musky floral woody odor used in fragrances. It is one of the musk components that perfume and cologne manufacturers use to add a musk odor to their products. Galaxolide was first synthesized in 1965, and used in the late 1960s in some fabric softeners and detergents. High concentrations were also incorporated in fine fragrances. 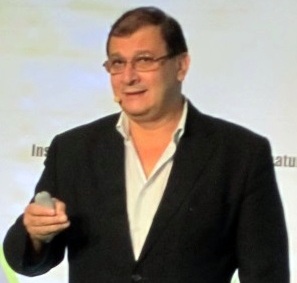 The Séralini affair was the controversy surrounding the publication, retraction, and republication of a journal article by French molecular biologist Gilles-Éric Séralini. First published by Food and Chemical Toxicology in September 2012, the article presented a two-year feeding study in rats, and reported an increase in tumors among rats fed genetically modified corn and the herbicide RoundUp. Scientists and regulatory agencies subsequently concluded that the study's design was flawed and its findings unsubstantiated. A chief criticism was that each part of the study had too few rats to obtain statistically useful data, particularly because the strain of rat used, Sprague Dawley, develops tumors at a high rate over its lifetime.

Gilles-Éric Séralini is a French molecular biologist, political advisor and activist on genetically modified organisms and foods. He is of Algerian-French origin. Séralini has been a professor of molecular biology at the University of Caen since 1991, and is president and chairman of the board of CRIIGEN.

The discipline of evidence-based toxicology (EBT) strives to transparently, consistently, and objectively assess available scientific evidence in order to answer questions in toxicology, the study of the adverse effects of chemical, physical, or biological agents on living organisms and the environment, including the prevention and amelioration of such effects. EBT has the potential to address concerns in the toxicological community about the limitations of current approaches to assessing the state of the science. These include concerns related to transparency in decision making, synthesis of different types of evidence, and the assessment of bias and credibility. Evidence-based toxicology has its roots in the larger movement towards evidence-based practices.

The GESIS – Leibniz Institute for the Social Sciences is the largest German infrastructure institute for the social sciences. It is headquartered in Mannheim, with a location in Cologne. With basic research-based services and consulting covering all levels of the scientific process, GESIS supports researchers in the social sciences. As of 2017, the president of GESIS is Christof Wolf.

The German Federal Institute for Risk Assessment, abbreviated BfR, is a body under public law of the German federal government with full legal capacity. The institute comes under the portfolio of the Federal Ministry of Food and Agriculture and has the task of providing scientific advice to the federal government on issues relating to food safety, product safety, chemical safety, contaminants in the food chain, animal protection and consumer health protection. Further technical supervision is performed by the Federal Ministry for the Environment, Nature Conservation, Building and Nuclear Safety and the Federal Ministry of Transport.

Tetramethyl acetyloctahydronaphthalenes is a synthetic ketone fragrance also known as OTNE and by other commercial trade names such as: Iso E Super, Iso Gamma Super, Anthamber, Amber Fleur, Boisvelone, Iso Ambois, Amberlan, Iso Velvetone, Orbitone, Amberonne. It is a synthetic woody odorant and is used as a fragrance ingredient in perfumes, laundry products and cosmetics.

The American College of Toxicology (ACT) is a professional association dedicated to providing an interactive forum for the advancement and exchange of scientific information in the field of toxicology.

Magnesium taurate, also known as magnesium ditaurate, is the magnesium salt of taurine, and a mineral supplement.