Richard Wilson OBE (born Iain Carmichael Wilson; [1] 9 July 1936) is a British actor, theatre director and broadcaster. He is most famous for playing Victor Meldrew in the BBC sitcom One Foot in the Grave . Another notable role was as Gaius, the court physician of Camelot, in the BBC drama Merlin . [2]

Wilson was born in Greenock, Scotland. He went to the Lady Alice Primary school in Greenock. He studied science subjects at Greenock Academy, [3] then did his National Service with the Royal Army Medical Corps, serving in Singapore. [4]

He worked in a laboratory at Stobhill Hospital in Glasgow as a research assistant [5] before switching to acting at age 27. He trained at RADA and then appeared in repertory theatres in Edinburgh (Traverse Theatre), Glasgow and Manchester (Stables Theatre).

He initially turned down the role of Victor Meldrew and it was almost offered to Les Dawson before Wilson changed his mind. [6]

Wilson was awarded the OBE in the 1994 Birthday Honours [7] for services to Drama. In April 1996, he was elected Rector of the University of Glasgow for a term of three years. [5]

The narration of "The Man Who Called Himself Jesus", from Strawbs' eponymous first album, was performed by Wilson. [8]

Wilson's biography, One Foot on the Stage: The Biography of Richard Wilson, was written by James Roose-Evans. [9]

Wilson is a supporter of his local football club, Greenock Morton, but he has come to lend greater support to English club Manchester United. [4] He is a patron of the Manchester United Supporters Trust. [11] Wilson is a good friend of his One Foot in the Grave co-star Angus Deayton, and is godfather to Deayton's son. [12]

Wilson has been a campaigner for gay rights for many years. [13] He appeared at charity events organised by gay rights campaign group Stonewall, but had not discussed his own sexuality in interviews with the media. [14] He was named in a list of influential gay people in 2013 by Time Out magazine, which he considered to have outed him. [15] [16]

He is one of the patrons of Scottish Youth Theatre. [17] Wilson is also a long-time supporter of the charity Sense and in 2007 hosted their annual award ceremony. [18] He is also one of the honorary patrons of the London children's charity, Scene & Heard. [19] He has been Honorary President of the Scottish Community Drama Association (SCDA) since 1998. [20]

He is a supporter of the Labour Party and recorded the party's manifesto on audio for the 2010 general election. [21] [22]

It was reported on 12 August 2016 that Wilson had suffered a heart attack. He had been due to reprise the role of Victor Meldrew in a one-man show at the 2016 Edinburgh Festival Fringe. [23]

Wilson has one older sister, Moira. [24] 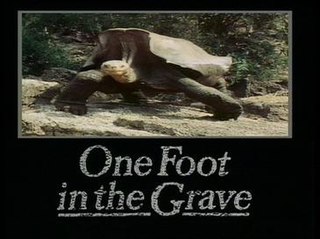 One Foot in the Grave is a British television sitcom written by David Renwick. There were six series and seven Christmas specials over a period of eleven years from early 1990 to late 2000. The first five series were broadcast between January 1990 and January 1995. For the next five years, the show appeared only as Christmas specials, followed by one final series in 2000.

Victor Meldrew is a fictional character in the BBC One sitcom One Foot in the Grave, created by David Renwick and portrayed by Richard Wilson. The character epitomised the archetypal grumpy old man. Meldrew is a foil for the bothersome aspects of children, cars, animals, power cuts and next-door neighbours. 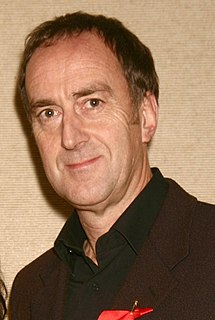 Gordon Angus Deayton is an English actor, writer, musician, comedian, and broadcaster. He was the original presenter of the satirical panel game Have I Got News for You and the host of British panel show Would I Lie to You? from 2007 to 2008, and a regular cast member of the David Renwick sitcom One Foot in the Grave from 1990 until 2000. He also played George Windsor in the final three series of Waterloo Road. 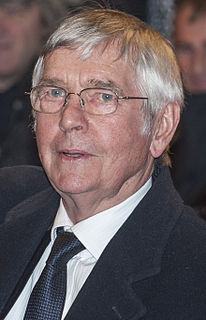 Hugh Richard Bonneville Williams is an English actor. He is best known for playing Robert Crawley, Earl of Grantham in the ITV historical drama series Downton Abbey. His performance on the show earned him a nomination at the Golden Globes, and two consecutive Primetime Emmy Award nominations as well as three Screen Actors Guild Awards. He is also known for his performances in the Roger Michell romantic comedy Notting Hill (1999), the Richard Eyre drama Iris (2001), the George Clooney war film The Monuments Men (2014), and the family film Paddington (2014) and its sequel Paddington 2 (2017).

Hannah Campbell Grant Gordon is a Scottish actress and presenter who is notable for her television work in the United Kingdom, including My Wife Next Door (1972), Upstairs, Downstairs (1974–75), Telford's Change (1979), Joint Account (1989–90) and an appearance in the final episode of One Foot in the Grave, broadcast in 2000. She is also known for presenting the Channel Four lifestyle show Watercolour Challenge in the late 1990s and for her appearance as Ann Treves in David Lynch's 1980 film The Elephant Man. She is sometimes credited under her married name of Hannah Warwick. 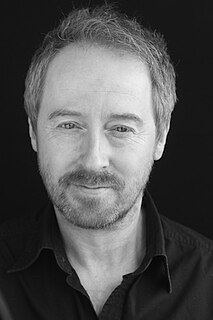 Blythe Duff is a Scottish actress best known for her role as Jackie Reid in the ITV television series drama, Taggart.

Colin McCredie is a Scottish actor, best known for his role as DC Stuart Fraser in the STV drama Taggart, Nick Morrison in the BBC Scotland Soap Opera River City and in the films Shallow Grave, Night is Day and The Missing Postman.

Things Aren't Simple Any More is the final episode of the British television sitcom One Foot in the Grave. It was written by David Renwick and stars Richard Wilson as Victor Meldrew, Annette Crosbie as his wife Margaret and features guest appearances by Hannah Gordon and Paul Merton. The episode depicts the death of the series' protagonist, Victor Meldrew, in a hit-and-run road accident and his wife's efforts to deal with the driver who killed him. Renwick had been struggling to conceive and write new stories for the series and decided to kill off the character. The episode was filmed at Shawford, Hampshire and at BBC Television Centre in London. 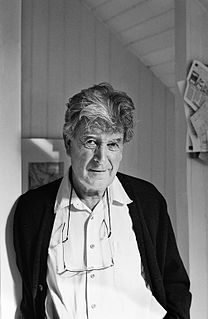 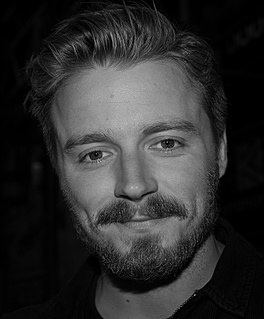