Richfield Coliseum, also known as the Coliseum at Richfield, was an indoor arena located in Richfield Township, between Cleveland and Akron, Ohio. It opened in 1974 as a replacement for the Cleveland Arena, and had a seating capacity of 20,273 for basketball. It was the main arena for the Northeast Ohio region until 1994, when it was replaced by Gund Arena in downtown Cleveland. The Coliseum stood vacant for five years before it was purchased and demolished in 1999 by the National Park Service. The site of the building was converted to a meadow and is now part of Cuyahoga Valley National Park.

The arena was primarily the home to the Cleveland Cavaliers of the National Basketball Association (NBA), developed by Cavaliers owner Nick Mileti, who also owned the Cleveland Crusaders of the World Hockey Association. Over the years it had additional tenants such as the Cleveland Barons of the National Hockey League, Cleveland Force of Major Indoor Soccer League, Cleveland Crunch of Major Indoor Soccer League, the Cleveland Lumberjacks of the International Hockey League, and the Cleveland Thunderbolts of the Arena Football League. In a 2012 interview with ESPN's Bill Simmons, basketball great Larry Bird said that it was his favorite arena to play in. The Coliseum was the site of Bird's final game in the NBA. Richfield Coliseum hosted the 1987, 1988, and 1992 editions of WWE's Survivor Series pay-per-view.

It hosted the 1981 NBA All-Star Game; The Buckeye Homecoming, the 1983 professional boxing match between Michael Dokes and Gerrie Coetzee; and the 1985 MISL All Star Game. It was also the site of the March 24, 1975 boxing match between Muhammad Ali and Chuck Wepner, which in part inspired the movie Rocky . [5]

The arena, which opened in 1974, replaced the Cleveland Arena, which had 12,500+ boxing capacity, 10,000+ otherwise. The new arena seated 20,273 for basketball and 18,544 for hockey, and was one of the first indoor arenas to contain luxury boxes. Cavaliers founder Nick Mileti was the driving force behind the Coliseum's construction, believing that its location in northern Summit County south of Cleveland near the confluence of the Ohio Turnpike and Interstates 77 and 271 was ideally suited given the growth of urban sprawl. The Coliseum was built in Richfield to draw fans from both of Northeast Ohio's major cities, as nearly five million Ohioans lived within less than an hour's drive (in good weather) from the Coliseum. While the arena's location hindered attendance somewhat, nevertheless, the Cavaliers' average attendance was over 18,000 per game each of the last two seasons at the Coliseum.

The Force also drew well at Richfield: 20,174 attended when Cleveland took on Minnesota on April 6, 1986, still the largest regular-season crowd (and the third-largest overall) ever to see an indoor soccer match in the US. [7]

Though a large arena at the time of construction, it had only one concourse for both levels, which made for very cramped conditions when attendance was anywhere close to capacity. The Coliseum's real drawback was that the revenue-producing luxury suites were at the uppermost level, and as such were the worst seats in the house. This situation was rectified at Rocket Mortgage FieldHouse, where the suites are much closer to the playing area.

Also hurting attendance was the arena's location at the intersection of Interstate 271 and Ohio State Route 303, which was a rural, two-lane highway outside of Richfield. As the only true access to the arena was directly at the interchange, traffic became an issue with every Coliseum event, especially when attendance was anywhere near capacity. Lake-effect snow from Lake Erie provided another obstacle to drivers during the winter months.

The Coliseum's fate was sealed in 1990, when voters in Cuyahoga County approved a new sin tax to fund the Gateway Sports and Entertainment Complex, which included Gund Arena, the original name of what is now Rocket Mortgage FieldHouse. The Cavaliers moved to Gund Arena at the beginning of the 1994–95 season.

After being vacant for five years, the arena was torn down in 1999, between March 30 [8] and May 21, [9] and the arena footprint and surrounding parking areas were allowed to be returned to woodland as part of the Cuyahoga Valley National Recreation Area, now Cuyahoga Valley National Park. [10] Two years later it was noted that the site appeared to have no trace of the former building, [11] although a widened section of Route 303, as well as the remains of the parking lot entrance, reveal its location.

The site is now a grassy meadow and has become an important area for wildlife. Birds such as the Eastern meadowlark, bobolink, and various sparrows now inhabit the area. This has caused the site to become popular with local birders. [12] [13] Other birds that are frequently seen are American goldfinch, red-winged blackbird, turkey vulture (buzzard), red-tailed hawk, and American kestrel.[ citation needed ]

In 1997, the hardwood floor was sold to Grace Christian School of Staunton, Virginia. [14]

The seating capacity for basketball was as follows: [15]

The following is a listing of concerts that took place during the time that the Coliseum was in operation: [16]

Nassau Veterans Memorial Coliseum, also known as simply the Nassau Coliseum, is a multi-purpose indoor arena in Uniondale, New York, east of New York City. The Long Island venue is approximately 7 miles (11 km) east of the eastern limits of the New York City Borough of Queens, and is also next to the Meadowbrook Parkway. The New York Islanders who have been playing there for many years are moving to a new arena the 2021-2022 season. 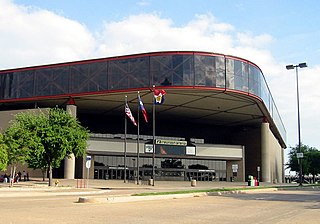 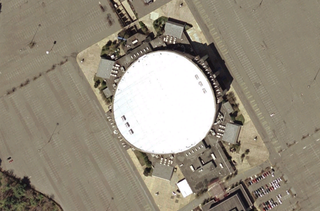 The Capital Centre was an indoor arena in the eastern United States, located in Landover, Maryland, a suburb east of Washington, D.C.

ARB is a Japanese rock band formed in 1978. Its members are Ryo Ishibashi, Koya Naito, Ebi, and Keith. Jean-Jacques Burnel from The Stranglers was also a member for a short time.

Kansas Coliseum was an entertainment complex in unincorporated Sedgwick County, Kansas, United States. It was located north of Wichita at the intersection of I-135 and 85th Street North. 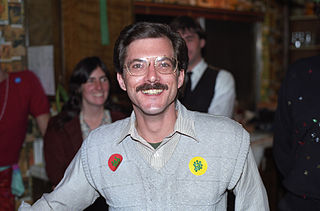 Kevin O'Donnell Jr. was an American science fiction author. He was the son of Kevin O'Donnell, who served as director of Peace Corps in 1971–72. 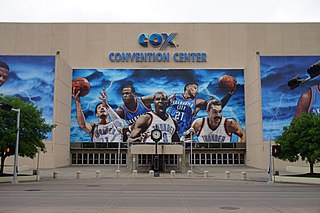 Prairie Surf Studios is a film production complex located in downtown Oklahoma City, Oklahoma. It was formerly a convention center and the home of several minor league teams. 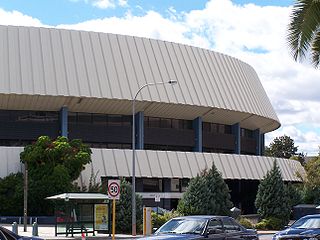 The Perth Entertainment Centre was an indoor arena and cinema complex in Perth Western Australia, located on Wellington Street in the city centre. It was demolished as part of the Perth City Link project in late 2011, with its replacement, Perth Arena, opening the following year.

The Capitol Theatre was an entertainment venue located at the intersection of Monroe Street and Central Avenue in Passaic, New Jersey. Opened in 1921 as a vaudeville house, the Capitol later served as a movie theater, and then as a venue for rock concerts.

The original Cleveland Force was one of six charter franchises in the original Major Indoor Soccer League (MISL). The team played from 1978 to 1988 at the Richfield Coliseum, the home of the Cleveland Cavaliers, and regularly drew crowds in excess of 12,000 in the mid-1980s.

This is a list of British television related events from 1984.

This is a list of British television related events from 1982.

This is a list of British television related events from 1981.

This is a list of British television related events from 1980.

This is a list of British television related events from 1979.