The Royal Australian Chemical Institute (RACI) is both the qualifying body in Australia for professional chemists and a learned society promoting the science and practice of chemistry in all its branches. [1] The RACI hosts conferences, seminars and workshops. It is the professional body for chemistry in Australia, with the ability to award the status of Chartered Chemist (CChem) to suitably qualified candidates.

The RACI was formed as the Australian Chemical Institute in Sydney in September 1917. The driving force was David Orme Masson, professor of chemistry at the University of Melbourne. It was incorporated under the Companies Act in New South Wales in 1923. It was given a Royal Charter in 1932, but it was not until a supplementary Royal Charter in 1953 that "Royal" was added to the title of the Institute. It moved to Melbourne in 1934. It was incorporated in Victoria in 2000. Since 1993, the Institute has had its office at 21 Vale Street, North Melbourne, VIC 3051, Australia. [2]

It has branches in all states and territories in Australia and divisions for the following areas of chemistry:

In addition to the divisions having organised conferences, they have co-operated in running occasional national conventions since 1953. [2]

A member of the Royal Australian Chemical Institute is designated with the honorific affix "MRACI". [5] As the professional body for chemistry in Australia, the Institute has the ability to award the status of Chartered Chemist ("CChem") to suitably qualified candidates. Election to fellow of the Institute ("FRACI") is dependent on a position of eminence, services rendered, academic honours, experience and status, creative achievement, responsibility and contribution to chemical science, and recommendation by the RACI Assessment Committee. [6] The Institute also accepts undergraduate and postgraduate student members, associate members, school affiliate members, and industry affiliate members. [5]

Chemistry in Australia [7] is a magazine published by the RACI monthly. It contains news, reviews of books and chemical software, as well as reports and stories aimed at a broad chemical audience. It is free to read online, and also available as a hard copy for members. It was established in 1934 as the Journal and Proceedings of the Australian Chemical Institute. [2]

The H. G. Smith Memorial Award is the premier award of the RACI. It is awarded annually to a member who has contributed most to the development of some branch of chemical science, judged by research work published or accepted for publication during the ten years (or equivalent relative to opportunity) preceding the award. The recipient is required to be a current member for a minimum of 3 years. If in the opinion of the RACI Board there is no candidate who has sufficient merit, the Board may refrain from making an award. [9] Notable recipients of the award include: [10]

The Cornforth Medal for the most outstanding PhD thesis submitted by a member. [11] It is named after the Australian Nobel Prize in Chemistry winner, Sir John Cornforth.

The Rennie Memorial Medal for the member of less than 8 years of professional experience since completing their most recent relevant qualification who has contributed most towards the development of some branch of chemical science.

The Leighton Memorial Medal is awarded to individuals in recognition of eminent services to chemistry in Australia. [12]

The Ollé Prize for a member of the Institute who submits the "best treatise, writing or paper" on any subject relevant to the Institute's interests.

The Adrien Albert award recognises the enormous contributions made by Prof. Adrien Albert to medicinal chemistry. It is the premier award of the Medicinal Chemistry and Chemical Biology Division and is given for sustained, outstanding research in the field of medicinal or agricultural chemistry or chemical biology. The research upon which the award is made must be conducted wholly, or largely, within Australia and New Zealand.

Hans Charles Freeman AM, FAA was a German-born Australian bioinorganic chemist, protein crystallographer, and Professor of Inorganic Chemistry who spent most of his academic career at the University of Sydney. His best known contributions to chemistry were his work explaining the unusual structural, electrochemical, and spectroscopic properties of blue copper proteins, particularly plastocyanin. He also introduced protein crystallography to Australia and was a strong advocate for programs to ensure Australian scientists have good access to "big science" facilities. Freeman has received numerous honours, including being elected a Fellow of the Australian Academy of Science (FAA) and appointed a Member of the Order of Australia (AM) by the Australian Government. He was a charismatic lecturer who voluntarily continued teaching well into his formal retirement and imbued his students with a love of science.

Adrien Albert was a leading authority in the development of medicinal chemistry in Australia. Albert also authored many important books on chemistry, including one on selective toxicity.

Edward Henry Rennie was an Australian scientist and a president of the Royal Society of South Australia.

Martina Heide Stenzel is a Professor in the Department of Chemistry at the University of New South Wales. She is also a Royal Australian Chemical Institute (RACI) University Ambassador and an editor for the Australian Journal of Chemistry

Margaret Harding is an Australian chemist and educator who is currently Deputy Vice-Chancellor (Research) at The Australian National University (ANU). She is an expert in medicinal and biomolecular chemistry, with special research interests in the areas of antifreeze proteins and ligand-DNA interactions. 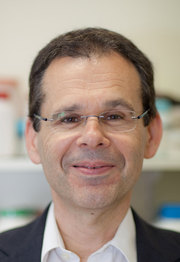 Anthony Steven Weiss PhD AM FRSC FTSE FRSN FRACI, FTERM, FBSE is a university researcher, company founder and entrepreneur. He is the leading scientist in human tropoelastin research and synthetic human elastin. He holds the McCaughey Chair in Biochemistry, heads the Charles Perkins Centre Node in Tissue Engineering and Regenerative Medicine, and is Professor of Biochemistry and Molecular Biotechnology at the University of Sydney. His discoveries are on human elastic materials that accelerate the healing and repair of arteries, skin and 3D human tissue components. He is a Fellow of the Royal Society of Chemistry. Weiss is on the editorial boards of the American Chemical Society Biomaterials Science and Engineering, Applied Materials Today (Elsevier), Biomaterials, Biomedical Materials, BioNanoScience (Springer) and Tissue Engineering. He is a biotechnology company founder, promoter of national and international technology development, and has received national and international awards, including the Order of Australia. 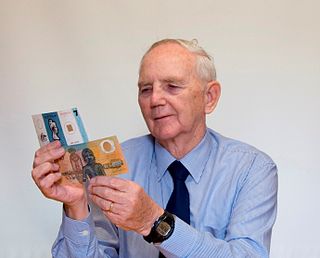 David Henry Solomon is an Australian polymer chemist. He is best known for his work in developing Living Radical Polymerization techniques, and polymer banknotes.

Denis Oswald Jordan AO FAA FRACI was an Anglo-Australian chemist with a distinguished career as a researcher and lecturer in Chemistry at both University College Nottingham (1940–53) and the University of Adelaide, where he was Angas Professor of Chemistry from 1958 to 1982. Jordan also served as president of Australian Institute of Nuclear Science and Engineering from 1958 to 1962, and Royal Australian Chemical Institute from 1978 to 1979.

Margaret Mary Sheil is an Australian academic and the Vice Chancellor and President of Queensland University of Technology..

Mary Jean Garson is an organic chemist and academic in Australia. She currently works for the University of Queensland.

Isabel Joy Bear is an Australian chemist who worked at CSIRO for over forty years. She was the first woman to be awarded the Royal Australian Chemical Institute Leighton Medal. She was inducted into the Victorian Honour Roll of Women in 2005. Bear identified several metastable zirconium sulphate hydrates, and with Dick Thomas was the first to scientifically describe "petrichor", the smell of rain on dry soil.