Achieving chartered status in any profession denotes to the wider community a high level of specialised subject knowledge and professional competence. The award of the Chartered Chemist (CChem) designation recognises the experienced practising chemist who has demonstrated an in-depth knowledge of chemistry, significant personal achievements based upon chemistry, professionalism in the workplace and a commitment to maintaining technical expertise through continuing professional development.

In the United Kingdom, CChem candidates must meet the following requirements:

The 12 professional attributes for Chartered Chemist in the UK are divided into five sections. The full list of attributes is: A. Demonstrate and develop your knowledge and experience of chemistry as well as analytical and scientific skills.

B. Exercise autonomy and professionalism in the workplace.

C. Communicate effectively and demonstrate influence in your role.

D. Demonstrate an involvement in Environmental, Health and Safety matters and adhere to the relevant requirements relating to your role.

E. Demonstrate an interest in broader developments in chemical science and make a contribution to the profession outside your usual job remit. [5]

In Australia, Chartered Membership (MRACI CChem) is for:

In Sri Lanka, every candidate for the award of the status of Chartered Chemist (C.Chem.) shall

OR (b) have an equivalent attainment acceptable to the Council.

(a) has specialist chemical skills relevant to their practice (b) has in– depth knowledge of the specialist areas of chemistry (c) has responsibilities based upon chemistry and has made a significant personal contribution. (d) demonstrates professionalism in the workplace (e) has maintained chemical expertise through continuing professional development. [3]

The Chartered Management Institute (CMI) is a professional institution for management based in the United Kingdom.

The Institution of Fire Engineers (IFE) is a worldwide body that provides research, training, conferences and professional qualifications for firefighters and civilians who work in fields related to fire fighting, the science of fire fighting and prevention, and related technology. The IFE was established in 1918 and upholds professional standards within all public and private fire sectors by offering assessment of knowledge, experience and development and engages with major stakeholders to offer international conferences, identify and promote good practice and enhance technical networks worldwide. The IFE is also an Ofqual recognised Awarding Organisation.

Chartered Environmentalist (CEnv) is a professional qualification in the United Kingdom that is awarded by the Society for the Environment through its 24 Licensed member organisations.

The College of Chemical Sciences is an institute in Sri Lanka. It was established 25 January 2001 during the Diamond Jubilee celebration of the Institute of Chemistry Ceylon. 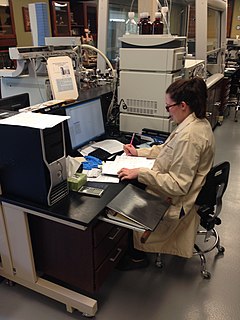 Jerence Nansel Oleap Fernando is a Sri Lankan chemist, scientist, academic and science administrator. He was Vice Chancellor of the Open University.

The Institute of Chartered Chemists of Nigeria (ICCON) is a professional regulatory body, established by Decree 91 of 1993. It is statutorily charged with the responsibility of regulating the teaching, learning and best practice of Chemistry profession in Nigeria. ICCON is a parastatal of Federal Ministry of Health (FMoH).

The Institute of Chemistry Ceylon is the successor to the Chemical Society of Ceylon and was established in the year 1971 for the general advancement of the science and practice of chemistry. It is a not-for-profit organization, learned society catering to the Chemical Sciences as well as a professional, qualifying and examination body looking after and responsible for the maintenance and enhancement of the profession of Chemistry in Sri Lanka. It is the oldest such body in any branch of the basic sciences in Sri Lanka. The Golden Jubilee of the Institute was held in 1991 & the Diamond Jubilee in 2001. The Institute of Chemistry Ceylon was incorporated by Act of Parliament No. 15 of 1972.