This is a list of scientific journals published by the Royal Society of Chemistry. [1]

Physical chemistry is the study of macroscopic, atomic, subatomic, and particulate phenomena in chemical systems in terms of the principles, practices, and concepts of physics such as motion, energy, force, time, thermodynamics, quantum chemistry, statistical mechanics, analytical dynamics and chemical equilibrium.

Sir John Meurig Thomas or JMT is a British scientist, educator, university administrator, and historian of science primarily known for his work on heterogeneous catalysis, solid-state chemistry, and surface and materials science.

CrystEngCommunity is a virtual web community for people working in the field of crystal engineering. The website is owned by the Royal Society of Chemistry (RSC). 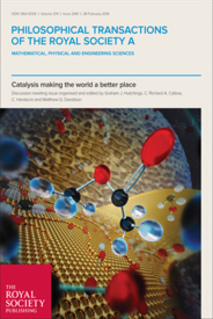 The bonding orbital is used in molecular orbital (MO) theory to describe the attractive interactions between the atomic orbitals of two or more atoms in a molecule. In MO theory, electrons are portrayed to move in waves. When more than one of these waves come close together, the in-phase combination of these waves produces an interaction that leads to a species that is greatly stabilized. The result of the waves’ constructive interference causes the density of the electrons to be found within the binding region, creating a stable bond between the two species.