Sir John Stranger Holman FRSC CChem (born 16 September 1946) [1] is an English chemist and academic. He is emeritus professor of chemistry at the University of York, senior advisor in education at the Gatsby Foundation, founding director of the National STEM Learning Centre, [2] Chair of the Bridge Group, past president of the Royal Society of Chemistry (RSC), [3] and President of The Association for Science Education (ASE). [4]

Holman was educated at the Royal Grammar School, Guildford, and Gonville and Caius College, Cambridge where he was awarded a Bachelor of Arts degree with Honours in 1967. [1]

Holman served as a Headteacher of Watford Grammar School for Boys between 1994 and 2000, [1] [5] and was the British government's National STEM Director from 2006 to 2010 [6] [7] (STEM referring to the academic disciplines of Science, technology, engineering, and mathematics). He served as president of the Royal Society of Chemistry from 2016 to 2018, [8] and was a trustee of the Natural History Museum (2011–2019). [9] He is Chair of the Salters' Institute board, [10] was the founding director of Salters' Advanced Chemistry programme, [10] and is the author of numerous chemistry textbooks.

Holman is author of the Good Career Guidance report for the Gatsby Foundation, [11] which is the basis for the English government's national strategy for career guidance in schools: Careers strategy: making the most of everyone's skills and talents. [12] Holman also authored the Good Practical Science report [13] and was the lead author of Improving Secondary Science guidance report for the Educational Environment Foundation (2018). [14]

Holman was Knighted in the 2010 New Year Honours. [1] [7] In 2014 the Royal Society of Chemistry awarded him the Lord Lewis Prize "in recognition of his extensive influence over chemistry education policy". [15] Holman was named in 2014 by the Science Council as one of the UK's 100 leading practising scientists, [16] and was the 2014 recipient of the Royal Society's biennial Kavli Education Medal, "in recognition of his significant impact on science education within the UK". [17] He was elected President of the Yorkshire Philosophical Society in 2018. [18]

The Royal Institution of Great Britain is an organisation for scientific education and research, based in the City of Westminster. It was founded in 1799 by the leading British scientists of the age, including Henry Cavendish and its first president, George Finch, the 9th Earl of Winchilsea. Its foundational principles were diffusing the knowledge of, and facilitating the general introduction of, useful mechanical inventions and improvements, as well as enhancing the application of science to the common purposes of life.

Ewine Fleur van Dishoeck is a Dutch astronomer and chemist. She is Professor of Molecular Astrophysics at Leiden Observatory, and the president of the International Astronomical Union. She is one of the pioneers of astrochemistry, and her research is aimed at determination of the structure of cosmic objects using their molecular spectra.

The Kavli Medal is the name of two medals awarded biennially by the Royal Society. 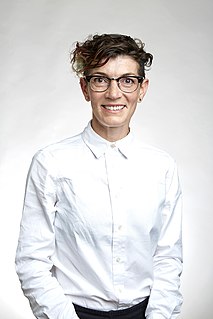 Thomas Welton is a Professor of Sustainable Chemistry at Imperial College London. He served as Head of the Department of Chemistry from 2007 to 2014 and as Dean of the Faculty of Natural Sciences from 2015 to 2019.He is a Fellow and the current President of the Royal Society of Chemistry. Welton's research focuses on sustainable chemistry, with particular focus on ionic liquids and on solvent effects on chemical reactions. Welton is openly gay and is active in advocating for greater visibility for members of the LGBT community in the sciences. He is a member of the UKRI Equality, Diversity and Inclusion External Advisory Group. 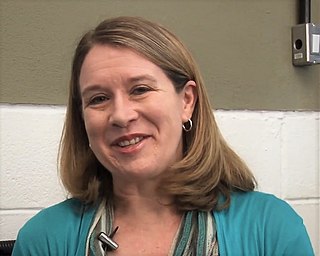 Christy Lynn Haynes is a chemist at the University of Minnesota. She works at the interface of analytical, biological, and nanomaterials chemistry.