SKATS stands for Standard Korean Alphabet Transliteration System. It is also known as Korean Morse equivalents. Despite the name, SKATS is not a true transliteration system. [1] SKATS maps the Hangul characters through Korean Morse code to the same codes in Morse code and back to their equivalents in the Latin script. Any phonetic correspondence between the Korean and Roman letters would be purely coincidental.

If a Korean Morse code operator were to transmit a Korean message in Morse, and an English-speaking Morse code operator heard the message, what they would write down is SKATS. The advantage of SKATS is the letter-perfect accuracy in conveying the Korean message, something that would be lost were romanisations such as RR or McCune-Reischauer used. SKATS dates back to the days before Korean keyboards gained widespread acceptance, so it was a way for Westerners who knew Korean to accurately produce the Korean language on a typewriter or keyboard. The primary users of SKATS are government departments who are interested in letter-to-letter accuracy.

SKATS is not a cipher. When using SKATS it is important to remember not to read the letters as they sound in English, but to read them as its original sound in SKATS.

The letters are written left to right as in standard written English. The correct form is to put one space between syllables and two spaces between words, but this often varies from one user to another. Without the double spaces between words, word breaks are ambiguous. If the rules are strictly observed, a Korean text written in SKATS could be perfectly recovered.

Double consonants and double or triple vowels are written the same way – each letter in the same order as if it were written in Hangul.

English: The kimchi is delicious.

Morse code is a method used in telecommunication to encode text characters as standardized sequences of two different signal durations, called dots and dashes or dits and dahs. Morse code is named after Samuel Morse, an inventor of the telegraph.

The Standard Arabic Technical Transliteration System, commonly referred to by its acronym SATTS, is a system for writing and transmitting Arabic language text using the one-for-one substitution of ASCII-range characters for the letters of the Arabic alphabet. Unlike more common systems for transliterating Arabic, SATTS does not provide the reader with any more phonetic information than standard Arabic orthography does; that is, it provides the bare Arabic alphabetic spelling with no notation of short vowels, doubled consonants, etc. In other words, it is intended as a transliteration tool for Arabic linguists, and is of limited use to those who do not know Arabic.

The Thai script is the abugida used to write Thai, Southern Thai and many other languages spoken in Thailand. The Thai alphabet itself has 44 consonant symbols, 16 vowel symbols that combine into at least 32 vowel forms and four tone diacritics to create characters mostly representing syllables.

An interpunct, ·, also known as an interpoint, middle dot, middot and centered dot or centred dot, is a punctuation mark consisting of a vertically centered dot used for interword separation in ancient Latin script.. It appears in a variety of uses in some modern languages and is present in Unicode as code point U+00B7·MIDDLE DOT.

Ü, is a character that typically represents a close front rounded vowel. It is classified as a separate letter in several extended Latin alphabets, but as the letter U with an umlaut/diaeresis in others such as Catalan, Galician, Occitan and Spanish. Although not a part of their alphabet, it also appears in languages such as Finnish and Swedish when retained in foreign names and words such as München and Finnish and Swedish spells in domestic words solely as Y. A small number of Dutch words also use this as a diaeresis.

The tilde, ˜ or ~), is a grapheme with several uses. The name of the character came into English from Spanish and from Portuguese, which in turn came from the Latin titulus, meaning "title" or "superscription".

A telegraph code is one of the character encodings used to transmit information by telegraphy. Morse code is the best-known such code. Telegraphy usually refers to the electrical telegraph, but telegraph systems using the optical telegraph were in use before that. A code consists of a number of code points, each corresponding to a letter of the alphabet, a numeral, or some other character. In codes intended for machines rather than humans, code points for control characters, such as carriage return, are required to control the operation of the mechanism. Each code point is made up of a number of elements arranged in a unique way for that character. There are usually two types of element, but more element types were employed in some codes not intended for machines. For instance, American Morse code had about five elements, rather than the two of International Morse Code.

The writing system of Korean, Hangul, is an alphabet organized into blocks of syllables; characters cannot just be written from left to right. Because of this, every possible syllable in Korean must either be rendered as syllable blocks by a font, or be encoded separately. Unicode uses the latter option. As an example, the syllable 하 (ha) consists of the characters ㅎ (h) and ㅏ (a), but all of them are encoded separately.

Words per minute, commonly abbreviated wpm, is a measure of words processed in a minute, often used as a measurement of the speed of typing, reading or Morse code sending and receiving.

The romanization of Arabic writes written and spoken Arabic in the Latin script in one of various systematic ways. Romanized Arabic is used for a number of different purposes, among them transcription of names and titles, cataloging Arabic language works, language education when used moreover or alongside the Arabic script, and representation of the language in scientific publications by linguists. These formal systems, which often make use of diacritics and non-standard Latin characters and are used in academic settings or for the benefit of non-speakers, contrast with informal means of written communication used by speakers such as the Latin-based Arabic chat alphabet. 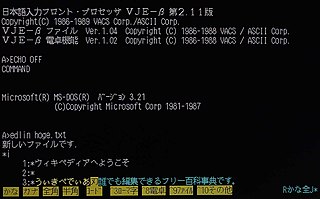 Japanese input methods are used to input Japanese characters on a computer.

The grave accent ( ` ) is a diacritical mark used to varying degrees in English, French, Dutch, Portuguese, Italian and many other western European languages. It is also used in other languages using the Latin alphabet, such as Mohawk and Yoruba, and with non-Latin writing systems such as the Greek and Cyrillic alphabets and the Bopomofo or Zhuyin Fuhao semi-syllabary. It has no single meaning, but can indicate pitch, stress, or other features.