The new logo is significantly different from the 2005 logo. It features headphones on a globe to represent itself as an international competition, instead of a previous logo consisting of a portrayal of a duet singing.

On 21 July, the show had topped the television ratings in India for the episode featuring Salman Khan according to Television Audience Measurement. [1]

The Gharana (literally "House") is utilised similarly to a House system used in schools and colleges. The contestants of the gharanas have been chosen by the mentors themselves.

Two of the four previous gharanas that were featured on Sa Re Ga Ma Pa Challenge 2005 have been replaced – Aadesh Shrivastava's Jai Ho and Jatin-Lalit's Dum have now been replaced with "Josh" and "Hit Squad". The following list represents the initial 32 contestants who were chosen by the mentors and in the order they were introduced.

In addition, there was another Gharana called the Eklavya Gharana – it was a "reserved force" of eight singers. The exact purpose of this Gharana was not mentioned during the initial days of the show but soon it was determined that it basically prevented a Gharana from getting eliminated in the initial rounds. The contestants in this Eklavya Gharana performed on the 2nd episode of the show. Later on, each week two contestants from this Gharana were chosen to join a mentor's Gharana after that mentor has had any of his contestants eliminated the previous week.

The only two contestants who never appeared in the competition after their performance on 5 May 2007 were:

Just as was done in previous Sa Re Ga Ma Pa shows, the idea of themes is featured to determine the contestants' versatility and ability to sing different genres.

The Mahagurus appeared as judges in the semi-finals. They "commented" and decided who the top contestants were on the performance episodes and also decided who got eliminated on the "elimination day" during the initial rounds.

Of the six contestants that were chosen by Vishal-Shekhar, the two contestants with most votes from the public and subsequently elected and brought back into the competition were:

The 15 finalists were announced at the end of the episode broadcast on 29 June 2007. That year, Aneek Dhar and Abhijeet Kosambi, winners of the regional spinoffs, Sa Re Ga Ma Pa Bangla and Sa Re Ga Ma Pa Marathi, got direct entry as finalists. Their direct entry into the finals caused some controversy that Ismail Darbar had the courage point out. However, after Himesh Reshammiya pleaded with Ismail, the issue dissolved. See Aneek-Abhijit controversy section for further details.

These are the names of the top fifteen finalists listed in order.

Contestants are in alphabetical order by last name, then by reverse chronological order of elimination.

* During the week of 22 June, there was no separate Performance/Elimination episode as the week marked the beginning of the "Chakravyuh" phase. However, eight contestants were eliminated that week.

In the Agnipariksha round, eliminations are based on public voting. Public voting is done through SMS, telephone or online. Each week, the contestant with lowest votes is eliminated.

Additionally, if all the contestants of a Gharana get eliminated, the Gharana also gets eliminated and subsequently the mentor(s) have to leave the show.

† During the week of 17 August, there was no eliminated contestant. That week's votes were added to the votes for the week of 24 August, and Junaid was then eliminated on the episode airing on 24 August.

On 29 June, Aditya Narayan announced that Aneek Dhar and Abhijeet Kosambi, the winners of the regional spinoffs of Sa Re Ga Ma Pa Bangla and Sa Re Ga Ma Pa Marathi, would be getting direct entry as a Top 14 finalist. This was a pre decided qualification as it was a part of their respective prizes of winning the regional contests. The viewers of Marathi and Bangla had already seen and heard this announcement at live telecast on stage when Abhijeet Kosambi and Aneek Dhar had won the respective competitions, so in fact there was no need for any controversy in that case. Yet the mentors did not approve of this saying they should not be allowed to enter the competition in the middle and that they should have come from the beginning. Ismail Darbar tried to walk away from the show stalling the shooting of the program.

In the latter episodes, Abhijeet Kosambi was eliminated with the fewest votes. Aneek Dhar is the only contestant in Himesh Reshammiya's 'gharana'. However Aneek Dhar has been in the Bottom 2 once. Aneek was also the top contestant thrice in the show and eventually ended up winning it all.

The Independence Day special episode shot on 10 August (Week 15) ran into a controversy when the issue came up of the Pakistani contestants, Junaid, Mussarat and Amanat refused to sing Indian patriotic songs on 15 August special. All work on the sets was stalled for 6 hours. Finally, the Zee TV officials decided that the Pakistani contestants should sing Pakistani patriotic songs as a solution. However, the next week, the three Pakistani singers were the Bottom Three. It was then decided that no contestant would be eliminated that week and the week's votes would be added to the votes of the following week to decide the next elimination.

Sa Re Ga Ma Pa Ek Shaam Taj Ke Naam was a one-day special episode organised by the SRGMP team as a tribute to the Taj Mahal and also dedicated to request and encourage people to vote for the Taj Mahal as one of the New Seven Wonders of the World .

Indian Idol is the Indian version of the Pop Idol format that has aired on Sony Entertainment Television since 2004. The show has spawned spin-off like Indian Idol Junior, which replaced the show for the seventh and eight seasons. The current winner is Sunny Hindustani. 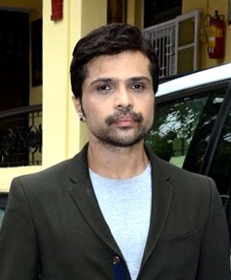 Himesh Reshammiya is an Indian playback singer, music director, songwriter, producer, and actor who works primarily in Bollywood. He started his career as music director in the film Pyaar Kiya To Darna Kya in 1998 and made his acting debut with the film Aap Kaa Surroor in 2007.

Debojit Saha is an Indian playback singer mainly active in Hindi, Bengali and Assamese language films. Saha was the winner of Zee TV singing reality show, Sa Re Ga Ma Pa Challenge 2005 and was awarded 'Voice of India' title. He was an anchor for singing reality show Zee Bangla SaReGaMaPa in the year 2006, 2007 and 2008 and he was also a celebrity contestant on Bigg Boss 2 in 2008 hosted by Shilpa Shetty. Debojit was seen as one of the Grand Juries for Zee TV SaReGaMaPa Lil Champs 2017. Theme song of "Namami Barak" Festival has been composed and conceptualised by Debojit Saha held on 17 to 19 November 2017 at silchar, Assam, India

Sa Re Ga Ma Pa Challenge 2005 was a reality series, an extension of the Sa Re Ga Ma Pa programme that was first aired in 1995 on Zee TV. With the new "Challenge" series, Zee TV brought 48 potential singers that are living in India.

Sa Re Ga Ma Pa is an Indian musical game show. It started airing on Zee TV in 1995 as Sa Re Ga Ma. It is the oldest running game show in India along with Telugu-language music game show Padutha Theeyaga. Both of them started in the same period. 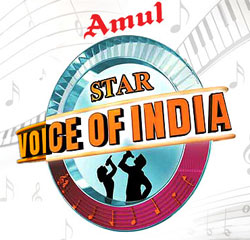 Star Voice of India is an Indian television singing competition that premiered on 18 May 2007 and ended on 24 November 2007 on StarPlus. The show was directed by Gajendra Singh, creator of the Sa Re Ga Ma Pa series, and produced by Urban Brew Studios. It also featured judges that were on the Sa Re Ga Ma Pa series, Aadesh Shrivastava, Abhijeet Bhattacharya, Alka Yagnik, Lalit Pandit and Jatin Pandit. Shaan, who had previously been hosting Sa Re Ga Ma Pa. The winner of the show was Ishmeet Singh Sodhi.

Aneek Dhar, born in Kolkata is an Indian singer who started his musical career at the age of 17 winning Zee TV Sa Re Ga Ma Pa Challenge 2007 and Zee Bangla SaReGaMaPa both in the same year. He also was the winner of Bigg Boss Bangla Season 1. Dhar has been performing with his band since then in India as well as abroad. In 2018, Dhar started his career as a music composer mainly for his music videos, web series and films.

Ek Se Badhkar Ek – Jalwe Sitaron Ke is a Hindi television reality show that aired on Zee TV channel, starting from 7 June 2008 to 14 September 2008. The show is a unique because it has both singing and dancing in a one platform. The show is replaced by its second season known as Chota Packet Bada Dhamaka, which is based on kids.

Sa Re Ga Ma Pa Marathi is an Indian Marathi musical game show. It is airing on Zee Marathi from 18 September 2006. Its fourteenth season is launching from 29 April 2021 with slogan of "Little Champs Season 3". The show had completed its 25 years in the year 2020. So, channel had arranged 2.30 hours special episode as live show in lockdown period on 24 May 2020 with named as "Ek Desh, Ek Raag". Previously, this function was planned on 17 May, but later to changed on 24 May 2020. 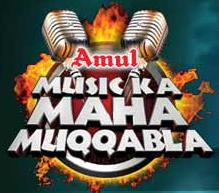 Music Ka Maha Muqqabla is a reality show on STAR Plus, which first aired on 19 December 2009. It aimed to bring a new format to music reality shows in India, which is based on teams rather than individuals. The show lasted for a total of 13 weeks. 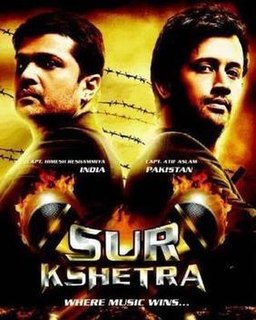 Sur Kshetra is a 2012 singing talent show or musical battle between teams of two neighboring countries: Pakistan and India. The show is hosted by Indian actress Ayesha Takia. The Pakistani Team is led by singer, music director, music composer, actor Atif Aslam and the Indian Team is led by music director Himesh Reshammiya.

Jo Jeeta Wohi Superstar 2 is an Indian reality show which is running on STAR Plus. It is in its 2nd season. Its 1st season premiered on 11 April 2008 and ended on 12 July 2008 now it has again started from 31 March 2012 and its finale was on 24 June 2012 Irfan won the title of Jo Jeeta Wohi Super Star 2, Sreeram took the 2nd place while Akanksha took the 3rd place

Hero - Sa Re Ga Ma Pa 2012 was the fifth instalment of the Sa Re Ga Ma Pa Challenge series. It premiered on 29 September 2012 on Zee TV. The show was hosted by popular singer Javed Ali.

Sa Re Ga Ma Pa L'il Champs 2017 is a singing competition television series, which premiered on 25 February 2017 on Zee TV. In a ‘Back to School’ format that lends itself to a spirited atmosphere of camaraderie and fun, the L’il Champs will represent their schools.

Amanat Ali is a Pakistani classical, pop and playback singer. Amanat gave his voice as a playback singer to a few Indian and Pakistani films '‘Tamannah, '‘Zinda Bhaag, '‘Dostana and '‘Bal Ganesh.

Superstar Singer is an Indian singing reality show that is broadcast on Sony Entertainment Television. It is aimed at kids between the ages of 2 and 15.

Sa Re Ga Ma Pa L'il Champs 2020 is an Indian reality television program scheduled to premiere on Zee TV in 2020. The show is a children's singing competition, spin off from Sa Re Ga Ma Pa. It is being hosted by Manish Paul. Previous editions were judged by Alka Yagnik, Udit Narayan, and Kumar Sanu. Sanu and Narayan has been replaced by Himesh Reshammiya and Javed Ali due to other commitments.