Sabella pavonina, commonly known as the peacock worm, is a marine polychaete worm belonging to the family Sabellidae. It occurs along the coasts of Western Europe and the Mediterranean. It is found in shallow, tidal waters with a bed of mud, sand or gravel. It is sometimes found on rocks or shipwrecks. 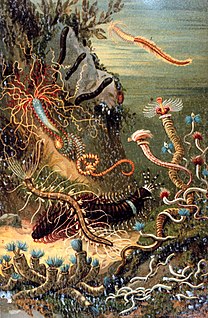 The Polychaeta, also known as the bristle worms or polychaetes, are a paraphyletic class of annelid worms, generally marine. Each body segment has a pair of fleshy protrusions called parapodia that bear many bristles, called chaetae, which are made of chitin. As such, polychaetes are sometimes referred to as bristle worms. More than 10,000 species are described in this class. Common representatives include the lugworm and the sandworm or clam worm Alitta. 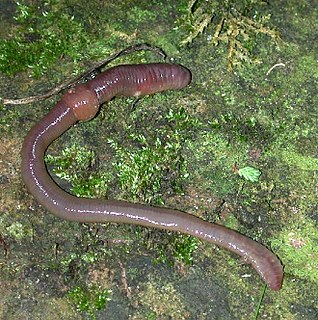 Worms are many different distantly related animals that typically have a long cylindrical tube-like body and no limbs. Worms vary in size from microscopic to over 1 metre (3.3 ft) in length for marine polychaete worms, 6.7 metres (22 ft) for the African giant earthworm, Microchaetus rappi, and 58 metres (190 ft) for the marine nemertean worm, Lineus longissimus. Various types of worm occupy a small variety of parasitic niches, living inside the bodies of other animals. Free-living worm species do not live on land, but instead, live in marine or freshwater environments, or underground by burrowing. In biology, "worm" refers to an obsolete taxon, vermes, used by Carolus Linnaeus and Jean-Baptiste Lamarck for all non-arthropod invertebrate animals, now seen to be paraphyletic. The name stems from the Old English word wyrm. Most animals called "worms" are invertebrates, but the term is also used for the amphibian caecilians and the slowworm Anguis, a legless burrowing lizard. Invertebrate animals commonly called "worms" include annelids, nematodes (roundworms), platyhelminthes (flatworms), marine nemertean worms, marine Chaetognatha, priapulid worms, and insect larvae such as grubs and maggots. 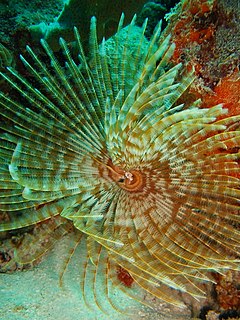 Sabellidae are a family of marine polychaete tube worms characterized by protruding feathery branchiae. Sabellids build tubes out of a tough, parchment-like exudate, strengthened with sand and bits of shell. Unlike the other sabellids, the genus Glomerula secretes a tube of calcium carbonate instead. Sabellidae can be found in subtidal habitats around the world. Their oldest fossils are known from the Early Jurassic.

It is 10-25 centimetres in length. Its body is elongated and divided into 100-600 small segments. The head has two fans of feathery tentacles arising from fleshy, semi-circular lobes. The body is mostly grey-green while the tentacles are brown, red or purple with darker bands.

In zoology, a tentacle is a flexible, mobile, elongated organ present in some species of animals, most of them invertebrates. In animal anatomy, tentacles usually occur in one or more pairs. Anatomically, the tentacles of animals work mainly like muscular hydrostats. Most forms of tentacles are used for grasping and feeding. Many are sensory organs, variously receptive to touch, vision, or to the smell or taste of particular foods or threats. Examples of such tentacles are the "eye stalks" of various kinds of snails. Some kinds of tentacles have both sensory and manipulatory functions.

The worm lives inside a smooth tube of fine mud or sand particles held together with mucus. The tube stands upright with the lower end attached to stones and the upper end protruding from the sea bed. When covered by water, the worm extends its tentacles out of the tube to feed by filtering out small food particles. [1] At low tide or when disturbed, it withdraws back into the tube. 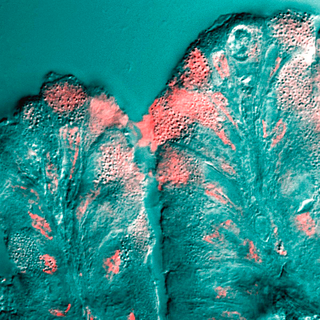 Mucus is a polymer. It is a slippery aqueous secretion produced by, and covering, mucous membranes. It is typically produced from cells found in mucous glands, although it may also originate from mixed glands, which contain both serous and mucous cells. It is a viscous colloid containing inorganic salts, antiseptic enzymes, immunoglobulins, and glycoproteins such as lactoferrin and mucins, which are produced by goblet cells in the mucous membranes and submucosal glands. Mucus serves to protect epithelial cells in the respiratory, gastrointestinal, urogenital, visual, and auditory systems; the epidermis in amphibians; and the gills in fish, against infectious agents such as fungi, bacteria and viruses. Most of the mucus produced is in the gastrointestinal tract. 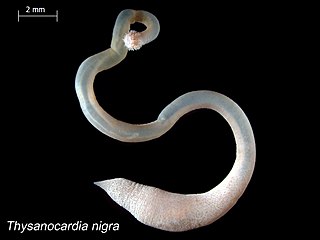 The Sipuncula or Sipunculida is a group containing about 162 species of bilaterally symmetrical, unsegmented marine worms. The name Sipuncula is from the genus name Sipunculus, and comes from the Latin siphunculus meaning a "small tube". Traditionally considered a phylum, Sipuncula seems to be closely related to Myzostomida and Annelida, and may be a subgroup of Annelida, based on recent molecular work. Sipunculans vary in size but most species are under 10 cm (4 in) in length.

Sabella is a genus of marine polychaete worm. Members of this genus are filter feeders and there are about ninety species. They live in tubes made of mud that project from the sand surface. They have a crown of feathery tentacles that protrude when the animal is submerged but are retracted when the animal is above water.

A radiole is a heavily ciliated feather-like tentacle found in highly organized clusters on the crowns of Canalipalpata. Canalipalpata is an order of sessile marine polychaete worms consisting of 31 families. These benthic annelid tube worms employ radioles primarily for alimentation. While their primary role is to function as an organ for filter feeding, radioles also serve as respiratory organs. Because of their role in gas exchange, radioles are often referred to as "gills".

Eupolymnia nebulosa is a species of sedentary marine polychaete worm in the Terebellidae family. It builds a tube of slime under stones or large shells on soft substrates on the lower shore and down to depths of about 500 metres.

Amphitrite ornata or ornate worm, is a species of marine polychaete worm in the family Terebellidae. 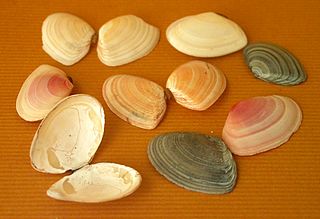 Tellina tenuis, the thin tellin, is a species of marine bivalve mollusc in the family Tellinidae. It is found off the coasts of northwest Europe and in the Mediterranean Sea, where it lives buried in sandy sediments.

Caudinidae is a family of sea cucumbers, marine animals with elongated bodies, leathery skins and tentacles that are found on the sea floor.

Molpadiidae is a family of sea cucumbers, marine invertebrates with elongated bodies, leathery skins and tentacles that are found on or burrowing in the sea floor.

Lagis koreni, commonly known as the trumpet worm, is a species of marine polychaete worm found in European waters. It lives within a narrow conical tube made of grains of sand and shell fragments.

Phoronis psammophila is a species of marine horseshoe worm in the phylum Phoronida. It lives in a tube projecting from the sea floor in shallow seas around the world.

Phoronopsis californica is a species of marine horseshoe worm in the phylum Phoronida. It was first described as a new species by William Hilton in 1930 when he found it at Balboa Bay, California.

Sagartia troglodytes is a species of sea anemone in the family Sagartiidae, also known as the mud sagartia or the cave-dwelling anemone.

Cerianthus lloydii is a species of tube-dwelling sea anemone in the family Cerianthidae. It is sometimes called the lesser cylinder anemone and is found in shallow seas around the coasts of north west Europe.

Sabella spallanzanii is a species of marine polychaete worms in the family Sabellidae. Common names include the Mediterranean fanworm, the feather duster worm, the European fan worm and the pencil worm. It is native to shallow waters in the northeastern Atlantic Ocean and the Mediterranean Sea. It has spread to various other parts of the world and is included on the Global Invasive Species Database.

Thelepus cincinnatus is a species of polychaete annelids in the family Terebellidae, which can be found inhabiting a tube of secrete on rocks and shells. The worm is widely distributed, and can be found in almost any region of the oceans at depths ranging from 10 to 4000 meters.

Cerianthus membranaceus, the cylinder anemone or coloured tube anemone, is a species of large, tube-dwelling anemone in the family Cerianthidae. It is native to the Mediterranean Sea and adjoining parts of the northeastern Atlantic Ocean. 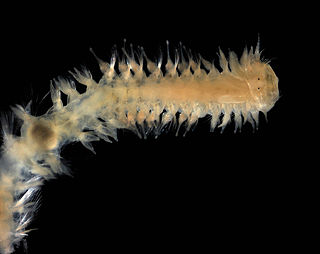 Poecilochaetus serpens is a species of marine polychaete worm in the family Poecilochaetidae. It is a benthic worm that burrows into soft sediment.

Edwardsia neozelanica, commonly known as the burrowing anemone, is a small cryptic sea anemone from New Zealand. It burrows into soft mud or sand, and when covered with water extends its tentacles to feed on tiny particles of detritus.