Sajjad Haider Karim (born 11 July 1970) is a British politician. He served as a Member of the European Parliament for the North West England between 2004 and 2019. [1]

He is a solicitor by profession and has been the Legal Affairs Spokesman for the Conservatives in the European Parliament since 2009.

As well as having been a Spokesman to the WTO, Sajjad Chair's the European Parliament's South Asia Trade Monitoring Committee; South Caucasus Delegation and is rotating Chair of the Advisory Committee on the Conduct of Members. He also serves as the Vice-President of the European Parliament's Anti-Racism & Diversity Intergroup (ARDI) [2] and as Chair of its Working Group on Islamophobia.

Karim has developed extensive experience in Trade related issues including being the Parliamentary Rapporteur for an EU-India Free Trade Agreement (FTA).

In 2015, he was given the highest National Honour bestowed upon foreigners by Pakistan for his role in securing a British Government lead initiative delivering favourable market access for Pakistan to the EU, known as the Generalised Scheme of Preferences (GSP+). [3]

Karim has also delivered through Parliament, reforms which deliver exemptions for SMEs from regulation; new powers for national parliaments in EU decision-making and lead the EU Audit profession reforms after the financial crisis of 2007–2008.

Sajjad, a British Pakistani, was born in Blackburn, Lancashire, on 11 July 1970. [4] His family hails from Mandi Bahauddin, Punjab, Pakistan. He belongs to a Gujjar family of District Mandi baha uddin . Karim attended Walter Street County primary school Brierfield and thereafter Mansfield High School, Brierfield. He completed his A levels at Nelson and Colne College before studying Law at University. He attended the College of Law in Chester, studying Law. He qualified as a solicitor of the Supreme Court of England and Wales in 1997 and rose to becoming an equity partner very quickly, specialising in cases of serious fraud defence work.

His earliest political activity started with leafleting at the age of seven for the then Conservative parliamentary candidate for Pendle. He later joined the Liberal Democrats in 1989. Karim was elected a member of Pendle Borough Council in 1994 and served until 2002 representing Brierfield ward.[ citation needed ]

Member of the European Parliament, 2004–present

Karim was elected to represent North West England in 2004 as a Liberal Democrat. On 26 November 2007 he joined the Conservative Party and was re-elected to the European Parliament in June 2009. In May 2014 he was re-elected to serve a third term.

He is interested in human rights issues, including child labour and the civil liberties of EU citizens in the War on Terror. He led the successful European Union contribution to the campaign for the commutation of the death penalty of British man, Mirza Tahir Hussain, who had spent half of his life on death row in Pakistan, for a crime he maintains he did not commit.

Karim has spoken out on a number of key human rights issues and in particular, campaigns for self-determination for Kashmir. He has hosted a number of conferences in the European Parliament on the issue. [5] In 2013 he brought together Syrian opposition groups to try encourage a co-hesive strategy to the current regime. He has also been active on the issue of democracy in Egypt and civil rights in Turkey.

On 26 November 2008, whilst visiting India as part of a European Parliament Committee on International Trade delegation (ahead of an EU-India summit), he was caught up in the Mumbai attacks in the lobby of the Taj Mahal Palace & Tower hotel. [6] Speaking to the Associated Press while holed up in the hotel's restaurant shortly after the terrorists gained control of the hotel, Sajjad said "I was in the main lobby and there was all of a sudden a lot of firing outside...all of a sudden another gunmen appeared in front of us, carrying machine gun-type weapons. And he just started firing at us ... I just turned and ran in the opposite direction." [7]

In December 2009, he was appointed as the Legal Affairs Spokesperson for the Conservative Group in the European Parliament. He was reappointed to this front bench position in June 2014 following the European Elections in May. As well as serving as a full member of the Legal Affairs Committee (JURI), Sajjad was previously a substitute member of the Industry, Research and Energy Committee and the Civil Liberties and the Justice and Home Affairs Committee. He also previously served as a member of the Delegation for relations with the Mashreq countries and on the Delegation to the Parliamentary Assembly of the Union for the Mediterranean. [8]

More recently as Legal Affairs Spokesperson, he has worked towards completing the Digital Single Market and Copyright Reform, which will have important and far-reaching benefits for international trade partners, consistently delivering time after time by enhancing the competitiveness of European businesses and facilitating international trade.

Both reports maintain the need for human rights to be integral in any trade related agreement that the EU has with another country.

Karim has spent a considerable amount of his time working towards a reduction in EU regulations and red tape on businesses, particularly SMEs. In October 2011 he was appointed as the European Parliament rapporteur on a new report that will look at improving the law-making process across the EU and reducing the legislative burden. [11]

In July 2011, the English Defence League staged an anti-Islamic protest outside his family home near Burnley, allegedly regarding new EU proposals on the labelling of Halal meat.[ verification needed ] [12] The group have targeted him despite not having much to do with either Saudi Arabia or British Bangladeshis.[ clarification needed ]

In February 2012, Karim was one of five MEPs to be appointed to a panel to police the new code of conduct rules that will govern the behaviour of MEPs. He is the only British MEP to serve on this committee. The Advisory Committee provides guidance to MEPs and advises the Parliament's President on what steps to take in the event of alleged breaches of the code. [13] In February 2014 he was appointed Chairman of the Advisory Committee by the President of the European Parliament, Martin Schulz.

After the European elections in 2014, he was selected as the European Conservative and Reformist Group Parliament Presidential candidate. The incumbent Martin Schultz retained his position as President, with Karim coming second out of four candidates, widely acknowledged that he secured support from MEPs right across the house beyond his own group.

Karim made headline news in December 2012 when he played an instrumental role in securing the return of six-year-old Atiya Anjum-Wilkinson to UK from Pakistan following abduction by her father. Over several weeks he worked closely with Greater Manchester Police and the Pakistani authorities and Atiya was returned safely to her mother during the Christmas holidays. [14]

In December 2013, the European Parliament voted to approve a concessionary trade status for Pakistan, GSP+. The preferential trade package for Pakistan's exports to EU countries came into force in January 2014. He steered the International Trade Committee to approve the beneficial trade tariff. [15]

From 2014-2019, Karim has steered the European Parliament’s relations with the South Caucasus as Chair of the region’s delegation, successfully contributing to the establishment of the Comprehensive and Enhanced Partnership Agreement with Armenia and its GSP+ trading regime. He has helped finalise the negotiations on a new comprehensive agreement with Azerbaijan and has been monitoring & guiding the implementation of the Association Agreement with Georgia, which includes a Deep & Comprehensive Free Trade Agreement component.

Karim has been appointed as the Vice-Chair of ARDI [16] and as Chair of its Working group on Islamophobia. He has held multiple events within the European Parliament aimed at raising awareness of the issue of Islamophobia. In 2018, the European Parliament - as part of its 2019 election campaign - displayed a poster on the Simone Veil Agora, featuring a photo of an ordinary Muslim family, captioned with ‘We need to work together to challenge migration’. [17] Sajjad who considered the poster islamophobic was the only MEP who personally wrote to President Tajani challenging the poster, raising the issue in Plenary and eventually compelling the President to take down the poster. [18]

Karim was awarded an Honorary Doctorate for the University of Management and Technology in Lahore for his work in securing the GSP+ deal and for services to the British Pakistani community. [19]

In August 2014 he was awarded the Sitara-i-qaid-i-Azam, Pakistan's highest national honour to non-Pakistanis, for his services to strengthen Pakistan/UK and Pakistan/EU relations. [20] Sajjad was presented with the award in March 2015 by Pakistan President, Mamnoon Hussain, at a ceremony in Islamabad.

In January 2015, he was nominated for the Politician of the Year award at the British Muslim Awards. [21]

In March 2019, Karim was the recipient of the International Trade Award at The Parliament Magazine's annual MEP Awards. [22]

In November 2019 Azerbaijan recognised Karims role in furthering EU-Azerbaijan relations by awarding him the Medal of Independence on the occasion of Azerbaijan's 100 years of independence.[ citation needed ]

Jean Denise Lambert is an English politician, and who served as a Member of the European Parliament for the London Region between 1999 and 2019. A member of the Green Party of England and Wales, she has been an MEP since 1999. One of three at that time of the Green MEPs from the UK, the others were Keith Taylor and Molly Scott Cato.

Thakur Artha Niranjan Joseph De Silva Deva Aditya,, known as Nirj Deva, is a British politician. A member of the Conservative Party, he served as a Member of the European Parliament representing South East England between 1999 and 2019. He was a Member of Parliament (MP) in the British House of Commons from 1992 to 1997, for the seat of Brentford and Isleworth. 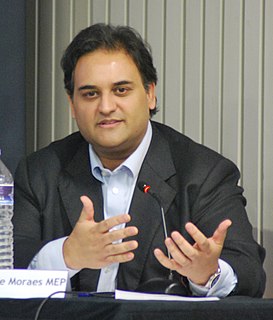 Linda McAvan is a British Labour Party politician, who was a Member of the European Parliament (MEP) for Yorkshire and the Humber from 1998, when she was first elected in a by-election following the resignation of Norman West. She served until her resignation on 19 April 2019.

Dr Timothy Charles Ayrton Tannock is a British politician, psychiatrist, and former Member of the European Parliament for London for the Conservative Party.

Alyn Smith is a Scottish politician. Belonging to the Scottish National Party (SNP), he was elected as the Member of Parliament (MP) for Stirling at the 2019 general election. He also served as a Member of the European Parliament (MEP) for Scotland from 2004 to 2019. 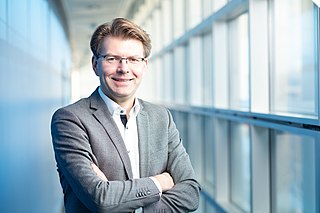 The Committees of the European Parliament are designed to aid the European Commission in initiating legislation.

Jacqueline Kay Swinburne is a Welsh politician. She was a Conservative Member of the European Parliament for Wales between 2009 and 2019.

Victoria Grace Ford is a British politician serving as the Member of Parliament (MP) for Chelmsford since 2017. A member of the Conservative Party, she is a former Member of the European Parliament for the East of England (2009–2017).

Pablo Zalba Bidegain is a Spanish economist and politician and has been a Member of the European Parliament (MEP), for the European People's Party, in office June 2009 to November 2016. Since 2016, he is the President of the Official Credit Institute.

Dita Charanzová is a Czech politician and diplomat who has been Member of the European Parliament (MEP) since 2014 for the ANO 2011 party.