A scenery wagon, also known as a stage wagon, is a mobile platform that is used to support and transport movable, three-dimensional theatrical scenery on a theater stage. In most cases, the scenery is constructed on top of the wagon such that the wagon, and the scenery it supports, forms a single, integrated structure. Heavy duty casters are mounted to the underside of the platform so that the entire assembly can be quickly moved onstage or offstage, so as to facilitate rapid scenery changes during live productions. Scenery wagons are built in a wide range of sizes, ranging from less than one square foot up to the size of the playing area of the stage. [1]

Scenery wagons comprise one of the four methods used to move scenery during the course of a theatre performance, the other three being "flying" (suspending) scenery from a fly system, elevating or lowering scenery on a stage lift, or "running" (manually carrying) the scenery. [2]

Various caster types are used on scenery wagons. The choice of caster type for any particular wagon depends on a number of factors, including platform size and shape, scenery weight, production aesthetics and budget. Typically, casters are mounted so that the bottom of the platform is elevated approximately one-half to three-quarters of an inch above the stage. The number of casters required for a wagon depends on caster type and load rating as well as the size, shape and weight of the wagon and scenery.

Air casters are sometimes used in place of rolling casters. These require pressurized air to operate, which produces audible hiss that is undesirable in some situations, and are typically more expensive than rolling casters, but they have the advantage of "locking" the scenery securely in place when depressurized and, like swivel casters, they permit omnidirectional movement.

To effect a scenery change, a wagon is simply rolled offstage to remove it from the set or rolled onstage to its designated position to add it to the set. In the latter case, the wagon must be immobilized after it has been positioned on the stage so that actors can safely interact with it (e.g., walk, stand, or jump on it) without causing the wagon to move. A number of methods and mechanisms are commonly used to immobilize, or "lock" scenery wagons in place:

Slip bolts may be used to hold scenery wagons in position when high lateral strength is required and it is permissible to drill holes in the stage. The bolts are mounted to the wagon base and, when the wagon is in position, the bolts are lowered into their designated, predrilled holes.

A lift jack is fundamentally a lever that attaches to the scenery wagon platform with a hinge, with a caster mounted to the underside of the lever near the hinge. When no downward force is applied to the lever handle, the wagon rests securely on the stage; this effectively locks the wagon in place due to friction between the wagon platform and the stage. When the lever handle is forced downward, however, the caster serves as a fulcrum to lift the wagon slightly above the stage, thus enabling the unit to be rolled. [2]

Lift jacks may be built into a wagon or onto a wagon's exterior, as circumstances dictate.

A wagon brake has a handle which, when pushed down, extends a steel rod down and onto the stage. When fully extended, the steel rod actually lifts a section of the wagon slightly off the stage floor. The bottom end of the rod has a threaded cavity that will accept an extension spindle, which in turn can be used to adjust the height of the wagon above the stage. The brake is released by raising its handle, thereby retracting the steel rod away from the stage.

Wagon brakes provide a very fast means of locking and unlocking wagons, but the brakes and stage can be damaged if the running crew attempts to move a wagon while its brakes are engaged. Damage to the stage can be mitigated by using extension spindles with compliant (e.g., polyurethane) tips. Toggle clamps, which are functionally similar to wagon brakes, are sometimes used in lieu of theatrical wagon brakes due to their higher load ratings and more durable construction.

Hinged foot irons may be bolted to the sides of the wagon. To lock the wagon in place, the free ends of the foot iron hinges are folded down and then secured to the stage with stage screws. This is a reliable method for immobilizing wagons, but it creates holes in the stage and can slow the process of locking and unlocking a wagon. Also, if a foot iron is allowed to contact the stage while the wagon is being moved, the stage floor can be damaged. [2]

In firearms terminology, an action is the functional mechanism of a breech-loading weapon that handles the ammunition, or the method by which that mechanism works. Actions are technically not present on muzzleloaders, as all those are single-shot weapons with a closed off breech and the ammunition is manually loaded through the muzzle. Instead, the muzzleloader ignition mechanism is referred to as the lock,.

A bicycle brake reduces the speed of a bicycle or prevents it from moving. The three main types are: rim brakes, disc brakes, and drum brakes.

A manual transmission, also known as a manual gearbox, a standard transmission, stick shift, or simply stick, or gearbox, is a type of transmission used in motor vehicle applications. It uses a driver-operated clutch, usually engaged and disengaged by a foot pedal or hand lever, for regulating torque transfer from the engine to the transmission; and a gear selector that can be operated by hands.

A lever tumbler lock is a type of lock that uses a set of levers to prevent the bolt from moving in the lock. In the simplest form of these, lifting the tumbler above a certain height will allow the bolt to slide past.

A caster is an undriven, single, double, or compound wheel that is designed to be attached to the bottom of a larger object to enable that object to be moved. They are available in various sizes, and are commonly made of rubber, plastic, nylon, aluminum, or stainless steel.

Door furniture or door hardware refers to any of the items that are attached to a door or a drawer to enhance its functionality or appearance.

A door handle or door knob is a mechanism used to open or close a door. The traditional door knob has a bolt or spindle running through it that sits just above a cylinder, to which the spindle is connected. Turning the knob pulls the cylinder in the direction of the turn. The end of the cylinder is the "latch bolt", which protrudes into a space carved out of the door frame, and which prevents the door from being opened if the knob is not turned. A spring or similar mechanism causes the latch to return to its protruding state whenever the knob is not being turned. Escutcheon plates are the keyhole covers, usually circular, through which keys pass to enter the lock body. If the door handles have a square or rectangular plate on which the handle is mounted this is called the backplate. The backplate can be plain, pierced for keyholes, or pierced and fitted with turn knobs and releases. The plate on the front edge of the lock where the latch bolt protrudes is called the faceplate. 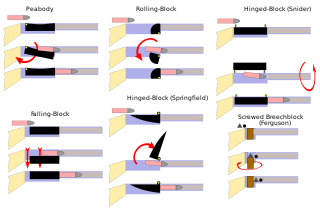 A breechblock is the part of the firearm action that closes the breech of a weapon at the moment of firing. 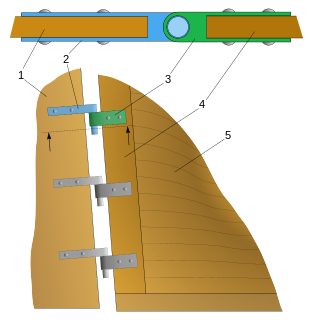 A pintle is a pin or bolt, usually inserted into a gudgeon, which is used as part of a pivot or hinge. Other applications include pintle and lunette ring for towing, and pintle pins securing casters in furniture.

A fly system, or theatrical rigging system, is a system of rope lines, blocks (pulleys), counterweights and related devices within a theater that enables a stage crew to fly (hoist) quickly, quietly and safely components such as curtains, lights, scenery, stage effects and, sometimes, people. Systems are typically designed to fly components between clear view of the audience and out of view, into the large opening, known as the fly loft, above the stage. 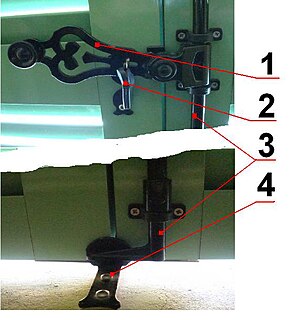 An espagnolette is a locking device, normally mounted on the vertical frame of a French door or casement window. A handle or knob is connected to a metal rod mounted to the surface of the frame, about a metre above the floor. Operating the handle rotates the rod, which has hooks at each end that fit into sockets at the head and sill of the opening. This type of lock is often used on semi-trailer trucks to fasten the rear doors. It can be identified by the use of a round bar, instead of a half-round bar used on a crémone bolt.

In a theater fly system, a rope lock is a device used to prevent a rope, and the line set it controls, from moving. A rope lock is controlled by a steel handle that engages the lock when vertical and releases it when horizontal. The handle is typically red powder coated or covered by a red rubber grip. A steel, oval-shaped safety ring encircles both the rope and the handle to ensure that the lock cannot be accidentally released. Rope locks are mounted to a locking rail, which provides structural support and holds them at a convenient level for the stage crew.

British Rail Universal Trolley Equipment (BRUTEs) were trolleys used from 1964 until 1999 for sorting, handling and transport by rail of parcels, newspapers, etc.

Flatbed trolleys are a common form of freight transport in distribution environments, for moving bulk loads. A very simple design offers a basic flat platform with four casters and a fixed handle which is used to either push or pull the platform with the load on the platform. Without a flat surface it becomes an "open frame" trolley and without a handle it is a bogie or dolly.